George XII (Georgian: გიორგი XII, Giorgi XII), sometimes known as George XIII (November 10, 1746 – December 28, 1800), of the House of Bagrationi, was the last king of Georgia (Kingdom of Kartli and Kakheti) from 1798 until his death in 1800. His brief reign in the closing years of the 18th century was marked by significant political instability, which implied the near certainty of a civil strife and a Persian invasion. Weakened by poor health and overwhelmed by problems in his realm, George renewed a request of protection from Tsar Paul I of Russia. After his death, Imperial Russia took advantage of the moment and moved to annex the Georgian kingdoms, while sending the remnants of the Georgian royal family into forced exile in Russia.

Early life and accession to the throne

George was born to Heraclius II (Erekle), then the king of Kakheti, and later also of Kartli, and his second wife Anna Abashidze. George was recognized in about 1766 by his father as Crown Prince Batonishvili, and appointed the lord of Pambak and Lori (now in Armenia). In 1770, he took part in Heraclius’ militarily successful, but ultimately fruitless expedition against the Ottoman garrisons in southern Georgia. In 1777, George, together with his half-brother, Prince Levan, campaigned against the defiant eristavi ("duke") of the Ksani and subdued his domain to the royal crown.

George ascended the Georgian throne upon his father’s death on January 12, 1798, being recognized by Tsar Paul on February 22, 1799 and crowned at the Anchiskhati Church in Tiflis on December 5, 1799. His capital, Tiflis, still lay largely in ruins and the country was suffering after-effects of the Persian invasion of 1795 which was a response to Heraclius' rapprochement with Imperial Russia (The Treaty of Georgievsk of 1783) and his refusal to submit to the Persian authority. 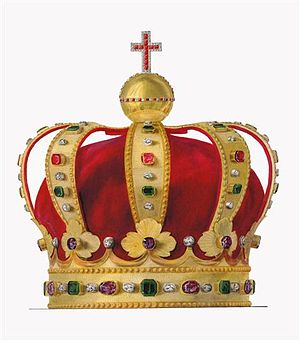 Crown of George XII, made of gold and decorated with 145 diamonds, 58 rubies, 24 emeralds and 16 amethysts. It took the form of a circlet surmounted by ornaments and eight arches. A globe surmounted by a cross rested on the top of the crown.

The three years of his reign was a time of confusion and instability. Unlike his heroic father, George did not enjoy popularity among his subjects and few had any respect for him. Suffering from excess of corpulence and edema, the king mostly lay ill in Tiflis and remained fanatically devout. He was beset by the intrigues of his stepmother, the Dowager Queen Darejan (Darya), who sought to deprive George's offspring of the throne in favor one of her own sons. His numerous half-brothers ensconced on the large domains assigned to them by their late father and ignored his authority. One of them, Alexander, left for Dagestan and remained in armed opposition to the king and his pro-Russian policies for years.

To make things even worse, Fath Ali Shah of Persia demanded that George XII send his oldest son to Tehran as a hostage and commanded to submit his country to the Persian vassalage. Immediately after George’s ascension to the throne, the shah wrote to the Georgian monarch:

"Our lofty standard will proceed to your lands and, just as occurred in the time of Agha Mohammed Khan, so now you will be subjected to doubly increased devastation, and Georgia will again be annihilated, and the Georgian people given over to our wrath."[1]

Thus, living in constant fear of being deposed, or of seeing yet another Persian army invading his kingdom, George was forced to the conclusion that something more than a formal Russian protectorate was needed to ensure the kingdom's survival. By that time, many leading Georgian politicians were disillusioned in the alliance with Russia since the latter had failed to provide any support during the 1795 Persian attack. Furthermore, George’s illness aroused an issue of the king’s possible successor and divided the Georgian nobles into rival parties; one of them seconded the crown prince David, son of George XII, and the other proffered the king’s half-brother Iulon. 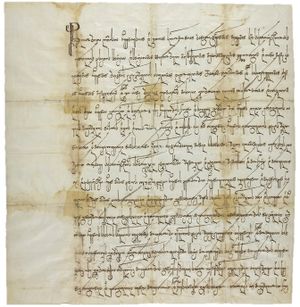 In order to secure succession to his son, and prevent the kingdom from being dragged into a civil war, George had already sent, in September 1799, an embassy to St Petersburg with instructions to negotiate a new treaty with Tsar Paul I of Russia. This time, the imperial government showed more interest towards Georgia as Napoleon’s Egyptian campaign drew Paul’s attention to the Middle East. In November 1799, a small Russian force arrived in Tiflis and Peter Ivanovich Kovalensky, the Tsar’s envoy, assumed control of Georgia’s foreign relations. Kovalensky and Hājjī Ibrāhīm Shīrāzī, the Persian minister, exchanged fiery notes reaffirming their governments’ determination to keep Georgia under their vassalage and threatening to enforce their interests by force.[1]

The interrupted negotiations between Russia and Georgia were resumed, but gradually shifted focus. King George offered the Tsar more authority over internal and foreign affairs of Georgia provided that the right of his dynasty to rule the country and the autocephaly of the Georgian Orthodox Church would be guaranteed. However, while the Georgian envoys were in St Petersburg still negotiating the terms of the new treaty, Paul I decided to annex the kingdom outright and, in November 1800, wrote to the Russian commander in Tiflis: "The weakening of the king’s health gives ground for expecting his decease; you are therefore immediately to dispatch, as soon as this occurs, a proclamation in Our name that until Our consent is received no action should be taken even to nominate an heir to the Georgian throne."[2] On December 18, 1800, the Tsar signed a manifesto unilaterally annexing the Georgian realm to the Russian crown. Neither Paul nor George were fated to see the manifesto published, however. On 28 December 1800, before his emissaries had returned from St. Petersburg, George XII died and his son, David, declared himself a regent of Georgia. Paul himself was murdered on March 11, 1801, and his successor, Alexander I refused to allow David to be crowned a king and formally reaffirmed the annexation in the September 12, 1801 decree. 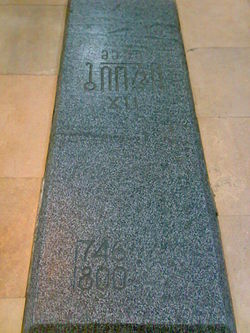 The tomb of George XII in Svetitskhoveli cathedral.