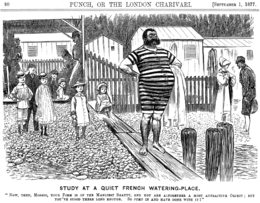 "Now then, Mossoo, your Form is of the Manliest Beauty, and you are altogether a most attractive Object; but you've stood there long enough. So jump in and have done with it!"

Cartoon by du Maurier from Punch.

George du Maurier was born in Paris, the son of Louis-Mathurin du Maurier and Ellen Clarke, daughter of Regency courtesan Mary Anne Clarke. He was brought up to believe that his aristocratic grandparents fled France during the Revolution, leaving vast estates behind in France, to live in England as émigrés. However, du Maurier's grandfather, Robert-Mathurin Busson, was actually a tradesman who left Paris in 1789 to avoid fraud charges, and later changed the family name to du Maurier.[1]

Du Maurier studied art in Paris, and moved to Antwerp, Belgium, where he lost vision in his left eye. He consulted an oculist in Düsseldorf, Germany, where he met his future wife, Emma Wightwick. Reportedly he studied chemistry at University College, London in 1851.[2] He is recorded in the 1861 England Census as living as a lodger at 85 Newman St in Marylebone.[3] On 3 January 1863, he married Emma at St Marylebone, Westminster.[4] Moving frequently over the course of their marriage, the couple first settled in Hampstead around 1877, initially at 27 Church Row and later at New Grove House in 1881.[5][6] In 1891, the family is recorded as residing at 2 Porchester Rd in Paddington.[7] They had five children: Beatrix (known as Trixy), Guy, Sylvia, Marie Louise (known as May) and Gerald.[8]

He became a member of the staff of the British satirical magazine Punch in 1865, drawing two cartoons a week. His most common targets were the affected manners of Victorian society, the bourgeoisie and members of Britain's growing middle class in particular. His most enduring cartoon, True Humility, was the origin of the expressions "good in parts" and "a curate's egg". (In the caption, a bishop addresses a curate [a humble class of clergyman]. whom he has condescended to invite to breakfast: "I'm afraid you've got a bad egg, Mr Jones." The curate replies, "Oh no, my Lord, I assure you – parts of it are excellent!").[9] In an earlier (1884) cartoon, du Maurier had coined the expression "bedside manner" by which he satirized actual medical skill.[10] Another of du Maurier's notable cartoons was of a videophone conversation in 1879, using a device he called "Edison's telephonoscope."[11]

In addition to producing black-and-white drawings for Punch, du Maurier created illustrations for several other popular periodicals: Harper's, The Graphic, The Illustrated Times, The Cornhill Magazine, and the religious periodical Good Words.[12] Furthermore, he did illustrations for the serialization of Charles Warren Adams's The Notting Hill Mystery, which is thought to be the first detective story of novel length to have appeared in English.[13] Among several other novels he illustrated was Misunderstood by Florence Montgomery in 1873.[14] 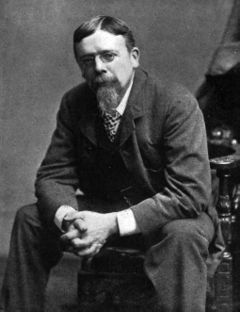 George du Maurier in the middle of his career

Owing to his deteriorating eyesight, du Maurier reduced his involvement with Punch in 1891 and settled in Hampstead, where he wrote three novels. His first, Peter Ibbetson (1891), was a modest success at the time and later adapted to stage and screen, most notably in a film, and as an opera.[15]

His second novel Trilby, was published in 1894. It fitted into the gothic horror genre which was undergoing a revival during the fin de siècle, and the book was hugely popular. The story of the poor artist's model Trilby O'Ferrall, transformed into a diva under the spell of the evil musical genius Svengali, created a sensation. Soap, songs, dances, toothpaste, and even the city of Trilby in Florida, were all named for the heroine, and the variety of soft felt hat with an indented crown that was worn in the London stage dramatization of the novel, is known to this day as a trilby. The plot inspired Gaston Leroux's 1910 novel Phantom of the Opera and the innumerable works derived from it.[16] Du Maurier eventually came to dislike the persistent attention given to his novel.

The third novel was a long, largely autobiographical work entitled The Martian, published posthumously in 1898.

He died on 8 October 1898 and was buried in St John-at-Hampstead churchyard in Hampstead parish in London.[17] Due to the success of his writings and illustrations, du Maurier left the then staggering amount of ‎£47,555 in his will.[18]

George du Maurier was a close friend of Henry James, the novelist; their relationship was fictionalised in David Lodge's Author, Author (2004). 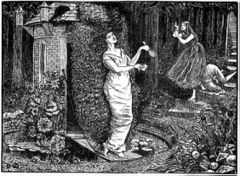