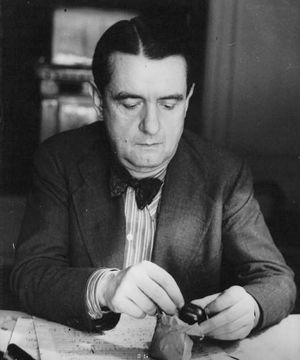 Georges Auric (French: [ɔʁik]; 15 February 1899 – 23 July 1983) was a French composer, born in Lodève, Hérault. He was considered one of Les Six, a group of artists informally associated with Jean Cocteau and Erik Satie.[1] Before he turned 20 he had orchestrated and written incidental music for several ballets and stage productions. He also had a distinguished career as a film composer.

Georges Auric began his musical career at a young age, performing a piano recital at the Société Musicale Indépendante at the age of 14. Several songs that he had written were then performed in the following year by Société Nationale de Musique.[2] Along with his early successes professionally, Auric studied music at the Paris Conservatoire, as well as composition with Vincent D'Indy at the Schola Cantorum de Paris and Albert Roussel.[3][4] Having gained recognition as a child prodigy both in composition and piano performance, he became a protégé of Erik Satie during the following decade. During the 1910s and ‘20s, he was a significant contributor of avant-garde music in Paris and was significantly influenced by Cocteau and the other composers of Les Six.[5]

Auric's early compositions were marked by a reaction against the musical establishment and the use of referential material. Because of this and his association with Cocteau and Satie, Auric was grouped into Les Six by music critic Henri Collet, and was friends with the artist Jean Hugo. His participation led to writing settings of poetry and other texts as songs and musicals. Along with the other five composers, he contributed a piece to L'Album des Six. In 1921, Cocteau asked him to write the music for his ballet, Les mariés de la tour Eiffel. He found himself short of time, so he asked his fellow composers of Les Six to contribute some music. All except Louis Durey agreed. During this time, he wrote his one-act opera Sous le masque (1927) (An earlier opera, La reine de coeur (1919), is lost). It was also in 1927 that he contributed the Rondeau for the children's ballet L'éventail de Jeanne, a collaboration between ten French composers. In 1952 he participated in yet another collaboration, the set of orchestral variations La guirlande de Campra. Les Six, though an informal and short-lived group, became known for its reaction against the musical establishment of the time and the promotion of absurdism and satire; the group rebelled similarly against Wagner as it did against Debussy. The music of these composers, including Auric, represented the specific cultural scene of Paris at the time and rejected the international styles brought by Russian and German music, as well as the symbolism of Debussy.[6] Auric's later development as a populist composer was prefigured by many of the techniques and ideals of Les Six, especially the use of popular music and situations. Music of the circus or the dance hall played a significant role in the music of Les Six, especially in their actual collaborations.[7] However, Les Six soon drew apart, with Auric and others taking different approaches to their art.

Following his early successes as an avant-garde composer, Auric went through a transitional period during the 1930s. He began writing for film in 1930 and composed the music for A Nous, la Liberté! in 1931, which was well received. The film itself was criticized for supposed communist or anarchist themes, but there was general approval of Auric's score for the film.[8] While he was beginning a successful career as a film composer, his music went through a period of stagnation and change. His Piano Sonata (1930–31) was poorly received and was followed by a period of five years in which he wrote very little, including his first three film scores. His association with Cocteau continued through this period with his composition of the score to Cocteau's Le sang dún poète. However, he abandoned the elitist and highly referential attitudes of his earlier years by 1935 in favor of a populist approach.[9] He became associated with leftist groups and publications, including the Association des Ecrivains et des Artistes Révolutionnaires (AEAR), the Maison de la Culture, and the Fédération Musicale Populaire. He adopted four strategies to composing; first, to participate in groups with other leftist artists; second, to reach a wider audience by writing in more genres; third, to write music aimed at a younger audience; and fourth, to express his political views more directly in his music.[10]

The films that Auric chose to score in his career as a film composer were influenced by these new-found beliefs, as well as by old associations. He collaborated with Jean Cocteau, his longtime associate from the days of Les Six, on eleven films.[11] He composed music for a large number of films over the years, including films produced in France, England, and America. Among his most popular scores is the score for Moulin Rouge. The song from that movie, "Where Is Your Heart?" became very popular.[12] In 1962 he gave up writing for motion pictures when he became director of the Opéra National de Paris and then chairman of SACEM, the French Performing Rights Society. Auric continued to write classical chamber music, especially for winds, right up to his death.

Music criticism was another major facet of Auric's career. His criticism was focused on promoting the ideals of Les Six and Cocteau, known as esprit nouveau. Specifically, his criticism focused on the perceived pretentiousness of Debussy, Wagner, Saint-Saëns, and Massenet, as well as the music of those who followed their styles. Cocteau, Les Six, and Auric found the music of those composers to be divorced from reality and instead preferred music that was grounded in populism.[13]

While Auric criticized Satie in the 1920s for joining the French Communist Party, he became associated with several leftist groups and contributed to the communist newspapers Marianne and Paris-Soir in the 1930s. The Association des Ecrivains et des Artistes Révolutionnaires (AEAR) was dedicated to bringing together Soviet and French communist artists to discuss their goals and approaches for disseminating their ideas to the public. It was through this group that Auric met many other far left artists and thinkers. These ideals transferred into Auric's concert music as well as his choices in which movies he scored.[14] In 1930 Auric married the painter Eleanore Vilter, who died in 1982.[15] Auric died in Paris on 23 July 1983 at the age of 83, and was interred at Montparnasse Cemetery, beside his wife.