From Infogalactic: the planetary knowledge core
Jump to: navigation, search
French physician and the namesake of Tourette's syndromeTemplate:SHORTDESC:French physician and the namesake of Tourette's syndrome
‹ The template below (Family name hatnote) is being considered for merging. See templates for discussion to help reach a consensus.›
In this Romance language name, the family name is Gilles de la Tourette, not Tourette.

Georges Albert Édouard Brutus Gilles de la Tourette (French: [ʒɔʁʒ albɛʁ edwaʁ bʁytys ʒil də la tuʁɛt]; 30 October 1857 – 22 May 1904) was a French neurologist and the namesake of Tourette syndrome, a neurological condition characterized by tics.[1] His main contributions in medicine were in the fields of hypnotism and hysteria.[1]

Gilles de la Tourette was born the oldest of four children on 30 October 1857[1] in the small town of Saint-Gervais-les-Trois-Clochers in the district of Châtellerault, near the city of Loudun.[2][3]

During 1873, Gilles de la Tourette began medical studies at Poitiers at the age of sixteen.[1] In 1881, he relocated to Paris, where he continued his studies at the Laennec Hospital.[1] 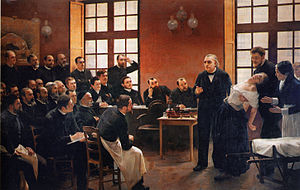 In A Clinical Lesson at the Salpêtrière (1887), French painter André Brouillet depicts a medical lecture with Jean-Martin Charcot and Gilles de la Tourette (seated at front)

Gilles de la Tourette began his internship in 1884, working "at a superhuman pace, publishing, teaching and practicing clinical medicine".[1] He became a student, amanuensis, and house physician of his mentor, influential contemporary neurologist Jean-Martin Charcot, director of the Salpêtrière Hospital.[1][4][5] Charcot also helped him to advance in his academic career. Gilles de la Tourette studied and lectured in psychotherapy, hysteria, and medical and legal ramifications of mesmerism (modern-day hypnosis). Colleagues and historians have described him as a "highly intelligent, if irascible, character".[1]

In 1884, Charcot asked Gilles de la Tourette to work on motor disorders; latah, myriachit, and the Jumping Frenchmen of Maine had recently been described, and Gilles de la Tourette believed the conditions were related and separate from chorea.[1] He described the symptoms of Tourette syndrome in one patient and collected previous observations of similar cases, and in 1885, he published a further nine cases using the name maladie des tics for the disorder.[6] Charcot renamed the syndrome "Gilles de la Tourette's illness" in his honor,[2] although the work was not well received at Salpêtrière.[1]

Gilles de la Tourette published an article on hysteria in the German Army, which angered Bismarck,[7] and a further article about unhygienic conditions in the floating hospitals on the river Thames.[1] With Gabriel Legué, he analyzed 17th-century abbess Jeanne des Anges' account of her hysteria that was allegedly based on her unrequited love for a priest Urbain Grandier, who was later burned for witchcraft.[7]

File:Petit-illustre-gdlt.gif
1893 depiction of the shooting of Gilles de la Tourette

Gilles de la Tourette married his cousin Marie Detrois (1867–1922) on 2 August 1887 in Loudon. Paul Brouardel and Charcot were witnesses. They had four children, three of whom lived to adulthood.[8]

In 1893, a former female patient, who was later revealed to have psychosis, shot Gilles de la Tourette in the neck,[1][9][lower-alpha 1] claiming one of his colleagues had hypnotized her against her will.[1] His mentor, Charcot, had died recently, and his young son had also died recently.[1] Although he recovered from the shooting and continued to work and organize lectures, after these events, Gilles de la Tourette began to display symptoms of severe depression.[1] After 1893, his mental health noticeably declined.[2]

In 1901, Charcot's son, Jean-Baptiste, convinced Gilles de la Tourette to travel to Switzerland on a ruse, and had him committed to a psychiatric hospital, where Gilles de la Tourette was diagnosed with tertiary syphilis.[10] His condition worsened and he was forced to resign.[2] His wife and colleagues were not forthcoming about the causes of his internment.[11] He died on 22 May 1904[1][2][11] with advanced dementia[2] at the Lausanne Psychiatric Hospital in Cery from what was labeled a status seizure, and that his wife described as apoplexy.[11] Lees (2019) states that "Gilles de la Tourette died of general paralysis of the insane (neurosyphilis)".[7]