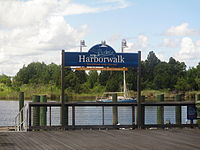 The Harborwalk in Georgetown 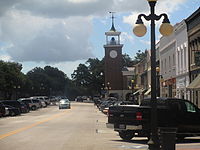 A glimpse of downtown Georgetown north from the Francis Marion Park 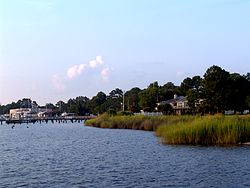 Looking at Georgetown from the point in East Bay Park

Winyah Bay was formed from a submergent or drowned coastline, i.e. the original rivers had a lower baseline, but either the ocean rose or the land sank, changing the landform and making a good location for a harbour. The rising of the ocean may have been due to melting of glacial ice at the end of the ice age.

There were 3,411 households out of which 32.8% had children under the age of 18 living with them, 38.0% were married couples living together, 25.1% had a female householder with no husband present, and 32.4% were non-families. 28.9% of all households were made up of individuals and 12.9% had someone living alone who was 65 years of age or older. The average household size was 2.55 and the average family size was 3.14. 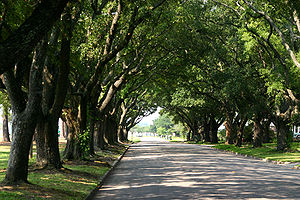 Most of the older neighborhoods have Live oaks overarching the streets, such as these on East Bay Street

Georgetown occupies a unique place in American history. Some historians claim that American history began here in 1526 with the earliest settlement in North America by Europeans with African slaves. It is believed that in that year the Spanish, under Lucas Vásquez de Ayllón, founded a colony on Waccamaw Neck called San Miguel de Gualdape. The colony failed for multiple reasons, including a fever epidemic and a revolt of the African slaves, who fled to join the Cofitachiqui Indians in the area. Having failed as farmers, the surviving Spanish built a ship from local cypress and oak trees and sailed to the Spice Islands in Maritime Southeast Asia.

After settling Charles Town in 1670, the English established trade with the Indians. Trading posts in the outlying areas quickly became settlements.

In 1729, Elisha Screven laid the plan for Georgetown and developed the city in a four-by-eight block grid. Referred to as the “Historic District”, the original grid city is listed on the National Register of Historic Places. It bears the original street names, lot numbers, and many of the original homes.

The Indian trade declined soon after Georgetown was established; and planters cultivated indigo as the cash commodity crop with rice as a secondary crop, both dependent on slave labor, primarily imported workers from Africa.[7][citation needed] Agricultural profits were so great between 1735–1775 that in 1757 the Winyah Indigo Society, whose members paid dues in indigo, opened and maintained the first public school for white children between Charles Town and Wilmington.

In the American Revolution, the father and son Georgetown planters, Thomas Lynch, Sr. and Thomas Lynch, Jr., signed the Declaration of Independence. During the final years of the conflict, Georgetown was the important port for supplying General Nathanael Greene's army. Francis Marion (the Swamp Fox) led many guerrilla actions in this vicinity. 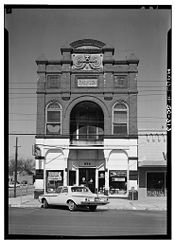 Following the American Revolution, rice surpassed indigo as the staple crop. It was cultivated on the swampy lowlands along the rivers, where enslaved labor built large earthworks: the dams, gates and canals to irrigate and drain the rice fields during cultivation. Large rice plantations were established around Georgetown on its five rivers.

By 1840, the Georgetown District (later County) produced nearly one-half of the total rice crop of the United States, and became the largest rice-exporting port in the world. Wealth from the rice created an elite European-American planter class; they built stately plantation manor houses, bought elegant furniture, and extended generous hospitality to others of their class. Their relatively leisured lifestyle for a select few, built of the labor of thousands of slaves, lasted until 1860.[8] The profits from Georgetown's rice trade reached nearby Charleston, where a thriving mercantile economy developed. Rice also supported Charleston artisans: fine furniture makers, jewelers and silversmiths, to satisfy the tastes of the planters for refined goods. Joshua John Ward, who owned the most slaves in the US – eventually more than 1,000 slaves on several plantations, lived in Georgetown. Many of the old plantations are still standing today, including Mansfield Plantation on the banks of the Black River. Joshua Ward's main Brookgreen Plantation is now the center and namesake of the Brookgreen Gardens park.

The town's thriving economy long attracted settlers from elsewhere, including numerous planters and shipowners who migrated to Georgetown from Virginia. These included the Shackelford family, whose migrant ancestor John Shackelford moved to Georgetown in the eighteenth century after serving in the Virginia forces of the Continental Army. His descendants became prominent planters, lawyers, judges and Georgetown and Charleston businessmen.[9] 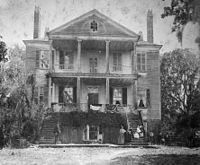 Georgetown and Georgetown County suffered terribly during Reconstruction (1865–1876), as agriculture was low nationally. In addition, the rice crops of 1866–88 were failures due to lack of capital preventing adequate preparation for new crops, inclement weather, and the planters' struggle to negotiate dealing with free labor and a shortage of labor. Not only were freedmen traveling to reconstitute families, but adults withdrew women and children as field laborers. Many freedmen families wanted to work for themselves as subsistence farmers, rather than labor for major planters. Rice continued to be grown commercially until about 1910, but never on the scale or with the profits attained before 1860. By the time the Reconstruction era ended, the Georgetown economy was shifting to harvesting and processing wood products; by 1900 there were several lumber mills in operation on the Sampit River. The largest was the Atlantic Coast Lumber Company which provided a much needed boost to the local economy. The Atlantic Coast Company mill in Georgetown was the largest lumber mill on the east coast at the time.

Like most cities, Georgetown suffered great economic deprivation during the Great Depression. The Atlantic Coast Lumber Company went bankrupt early in the depression, putting almost everyone out of work. In 1936 help arrived. In that year the Southern Kraft Division of International Paper opened a mill; by 1944 it was the largest in the world.

A major disaster struck the area in September 1989: Hurricane Hugo struck south of Georgetown, but with extremely hard winds and an intense storm surge that damaged Georgetown along with nearby areas. As Georgetown was under Hugo's northern eyewall, it suffered winds more severe and damaging than in Charleston, which was in the hurricane's weak corridor.

In recent years, the economy has become more diversified. A steel mill has located here by the Korf company of Germany in 1973. The steel mill was financed in 1993 by Mitt Romney's Bain Capital and was called Georgetown Steel which became GST Steel Company with its sister plant Kansas City Bolt and Nut Company plant in Kansas City, Missouri. The company declared bankruptcy in 2001 closing the Kansas City plant and then closing the South Carolina plant in 2003. The Georgetown plant has subsequently reopened under ownership of ArcelorMittal. Due to the influx of cheap foreign steel, the plant closed is doors permanently in August of 2015. [11][12][13][14] Heritage tourism has become a booming business. In addition, many retirees have chosen to settle in this area of beaches, plantations redeveloped as residential communities, and pleasant climate.

Georgetown has number of historical churches including Prince George Winyah Episcopal Church, the oldest religious body in Georgetown. The Hebrew Cemetery of Georgetown dates to the 1760s. The first Jewish settlers were Sephardim who had been living in London, after their ancestors were expelled from Spain and Portugal. The town has one synagogue, Temple Beth Elohim.

Georgetown has been the destination of many prominent people throughout the nearly 277 years of the city's life. George Washington visited Clifton Plantation and addressed the townspeople in 1791. President James Monroe was entertained in 1821 at Prospect Hill (now Arcadia) on Waccamaw with a real red carpet rolled out to the river. Theodosia Burr made her home at the Oaks Plantation (now part of Brookgreen Gardens) after her marriage to Joseph Alston in 1801; she departed from Georgetown on her ill-fated voyage in 1812. Brookgreen was also the boyhood home of one of America's most famous painters, Washington Allston. Joel R. Poinsett lived at White House Plantation on the Black River. After retiring from government service, Poinsett entertained President Martin Van Buren at his home. President Grover Cleveland, as guest of the Annandale Gun Club, came for duck hunting in 1894 and 1896. Bernard Baruch, America's elder statesman, entertained many notables at Hobcaw Barony, his home for many years. Among those were President Franklin D. Roosevelt, Winston Churchill, General Mark Clark and General Omar Bradley.