Georgetown College is a small, private, Christian liberal arts college located in Georgetown, Kentucky, United States. Chartered in 1829, Georgetown College was the first Baptist college west of the Allegheny Mountains.[1][2] With a low student-to-faculty ratio of 11-to-1, the College offers many undergraduate degrees and a Master of Arts in Education.

Georgetown College traces its roots to Royal Springs Academy, a classical school founded by Baptist minister Elijah Craig in Georgetown in 1787. The institution was renamed Rittenhouse Academy in 1798 as part of a land grant agreement, and was led by Barton Stone, a co-founder of the Stone Campbell Movement, 1816–19. The academy declined and closed by 1829.

In 1829, the Kentucky General Assembly chartered the Kentucky Baptist Education Society with the purpose of establishing a Baptist college in the state. Twenty-four trustees under the leadership of Silas Noel selected the town of Georgetown as the site for the new school. Georgetown was selected because the community agreed to raise $20,000 and to donate the assets of the recently closed Rittenhouse Academy.[1] 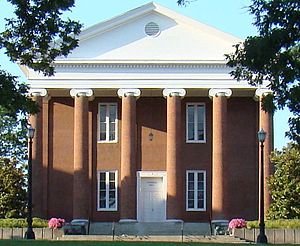 Georgetown College overcame numerous difficulties in its early years. The first president hired for the college in 1829, William D. Staughton, died before assuming his duties. The second president, Rev. Joel Smith Bacon, stayed two years (1830–1832), fighting court cases to release funding for the college before leaving out of frustration. The funds were not released until 1836, when Benjamin Franklin Farnsworth became the third president hired. By then there was a power struggle in progress; Farnsworth had been hired by the Baptists to frustrate the Campbellites who were attempting to take control of the college. After the Campbellites founded a rival college only blocks away, Farnsworth found his attempts to build up Georgetown College stymied, and resigned in 1837.[1]

In 1838, Rev. Rockwood Giddings became the fourth president hired for the college. During his short tenure, Giddings began construction on Recitation Hall, the first permanent building for the school. He made many other advances that put the college on sound footing. Giddings died of exhaustion after a year in office and was replaced by Rev. Howard Malcolm in 1840. Malcolm oversaw the completion of the construction of the building, now known as Giddings Hall. He also expanded the educational offerings beyond the classics and encouraged the founding of literary societies and the Georgetown Female Academy. He resigned in 1849 when his anti-slavery vote at Kentucky's third constitutional convention resulted in much criticism from slavery proponents and a threat on his life.[1]

As the student population grew, the administration sought out ways to diversify the campus and protect academic freedom. In 2005, Georgetown College and the Kentucky Baptist Convention redefined their formal relationship. With the approval of the new agreement by the Convention, the College reverted to its original arrangement with Kentucky Baptists. From 1829 to 1942, the College had an independent, self-perpetuating board of trustees and was designated as the senior, liberal arts college for Kentucky Baptists until the 1960s, when Campbellsville College and Cumberland College became senior colleges. Under a 1942 agreement, the Convention chose the College's trustees. The College's board submitted candidates to the Convention's Committee on Nominations and delegates to the annual meeting of the Convention elected them. Georgetown College also received an annual contribution from the Convention for all of the Twentieth Century. Under the new agreement, the Convention's annual contribution will be phased out, the trustee board will elect its members, and at least 75 percent of the board's membership will be Kentucky Baptists. However, the College will continue to work cooperatively in ministry with the Convention, which will be coordinated through the Campus Minister, a Convention funded position. (The partnership is scheduled to conclude in November 2014.)[3] The College partners with Regent's Park College, a Baptist College at the University of Oxford, has joined the Baptist World Alliance, and has an agreement with the International Baptist Convention, which allows Georgetown students to work as interns in European Baptist churches.[1]

Georgetown College has produced five Rhodes Scholars and 31 Fulbright Scholars since 1989.[4] The College also has an Honors program and a partnership with Regent's Park College, Oxford. In 2014, the College became one of only 18 schools nationwide to earn the highest rating for protecting free speech on campus.[5] Georgetown College became a member of the Southern University Conference in 2010.

The Georgetown College Department of Chemistry has received American Chemical Society Approval and is one of only two private colleges in Kentucky with this prestigious recognition.[7]

A partnership with Regents Park College provides for students to spend up to a year studying at Oxford University (UK), or for ministerial education leading to degrees from GC (B.A.) and from Regents Park (B.Th. or M.Th.). Georgetown also offers an Immersion en Espanol program where highly motivated students develop their language skills outside of Spanish classes. Open to all academic disciplines, the IEGC offers 15 hours of general education courses in settings enhancing Spanish fluency and linguistic competency across majors. The College participates in a number of consortia to provide off-campus and international experiences for its students, including the CCSA, KIIS, CGE, and CIIS.

Georgetown College has 58 student clubs and organizations, including four national fraternities. The college offers a chapel, several Christian and other religious groups for students. Its social organizations cover a wide range of interests, including government, recreation, community service, activism, the arts, and academics.[9]

The Georgetown College Maskrafter theatre group is the oldest collegiate theatre company in Kentucky and offers traditional theatre, an emphasis on creating original work, and new initiatives in digital motion picture art. As of 2007, the Maskrafters have produced a feature-length movie entitled "Surviving Guthrie", and have put on the musical "She Loves Me". The Maskrafters have also done recent plays including Proof,The Fantasticks, Grease, and Shakespeare's The Tempest. The Maskrafters are primarily students at Georgetown, and are guided by staff.[12]

A student-run newspaper, called The Georgetonian, publishes multiple issues per semester.[13] A student-run radio station, WRVG, is housed on campus in the Cralle Student Center.[14]

Songfest - Songfest is an evening of skits written by, starring, and produced by Greek and independent groups on campus. Skits are centered on the Homecoming theme, and also incorporate singing, dancing, and acting. Groups engage in competitions to win awards.[15] 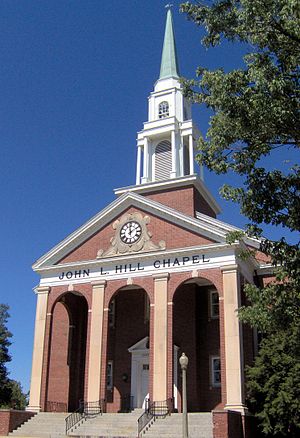 Chapel Day and Men's Bid Day - Chapel Day and Men's Bid Day takes place each January. Chapel Day is a sorority event letting the active members know which pledges accepted their bid to join the sorority. The pledges dress in their new sorority's colors and run through the doors of the Chapel into the waiting arms of their sisters. The fraternities' version of Chapel Day occurs the following week. Referred to as Men's Bid Day, it operates in a similar fashion and is held at Cooke Memorial. Even independent students, faculty, staff, family, and sometimes pets brave the cold to enjoy the excitement of this special campus tradition.[15]

Homecoming - Homecoming is an annual tradition, which is highlighted by Songfest and a football game. Every year, alumni heads back to Georgetown's campus. On Saturday morning, have brunch, listen to live music and fellowship with fellow alumni, professors and current students. A Homecoming King and Queen, elected by the student body, are crowned during halftime of the football game.[15]

Belle of the Blue - Belle of the Blue is Georgetown's small-scale version of Miss America. It is an annual scholarship pageant that any freshmen through junior woman can participate in. Each residence hall, including the male dormitories, nominates a woman to compete as their representative in the February event. On pageant night, the women are judged based on scholarship, interview, talent, poise and appearance. Another title awarded is "Miss Congeniality," as well as an overall scholarship to Georgetown College.[15]

Midnight Brunch -The Caf, each semester, selects one night during finals week to open at midnight. Students listen to music that blares and games are played, and the professors serve students platefuls of comfort food to help fuel their late-night study sessions.[15]

Grubfest - Grubfest happens each September. Students join in the Quad for the annual battle to see which team can complete the most challenges. In a matter of hours, the Quad, a lush, green open area for socializing and studying, is turned into a slimy, muddy arena covered with food products. At the end of Grubfest, the two dirtiest and most creative participants are crowned king and queen of the year's festivities.[15]

Hanging of the Green - Hanging of the Green is held each December, and students, faculty, and staff gather together in the Chapel on the first Monday night of the month for a worship service including an advent wreath lit by faculty and staff, an upperclassman offering the service's message, and a Christmas tree trimmed on-stage with ornaments representing various organizations on campus. At the end, the attendees sing "Silent Night".[15]

Commencement - The Commencement, or Graduation ceremony takes place every May on Giddings Lawn. Seniors troop through the doors of Giddings Hall and fan out onto the front lawn, where commencement proceeds.[15]

The athletics teams at Georgetown College are known as the Tigers. They participate in the NAIA and in the Mid-South Conference (MSC).[16]

On April 28, 2012, the college officially announced that after a year-long study, it had decided to transfer its athletics program to NCAA Division II. It is presumed they will join the newly formed Great Midwest Athletic Conference.[17] However, on July 24, 2012, the college had released that its application to join the NCAA was denied.[18]

In January 2014, the College submitted a second application to join the NCAA and awaits hearing the decision.[19]

The Tigers participate in 17 varsity sports.[20] The Tigers also have two co-ed teams and a dance team.[20]