Georgetown County is a county located in the U.S. state of South Carolina. As of the 2010 census, the population was 60,158.[1] Its county seat is Georgetown.[2] The county was founded in 1769. It is named for George III of the United Kingdom.[3]

Georgetown County has several rivers, including the Great Pee Dee River, the Waccamaw River, Black River, and Sampit River, all of which flow into Winyah Bay. The Santee River, which forms the southern boundary of the county, empties directly into the Atlantic. The Intracoastal Waterway crosses the county and Winyah Bay. The rivers and the bay have had a decisive effect on human development of the area, especially as the city of Georgetown has an excellent seaport and harbor.

Georgetown County is a diverse county with four distinct areas:

1. The Atlantic coastline, also called Waccamaw Neck, including the communities of Murrells Inlet, Litchfield, Pawleys Island and DeBordieu, is part of "The Grand Strand" (beach), which includes Myrtle Beach to the north. The Georgetown County part of the Grand Strand used to be rural, but is exploding with development today. Condos line the shoreline at Litchfield, and many of the old cottages at Pawleys are being demolished for larger houses. DeBordieu is a gated community. 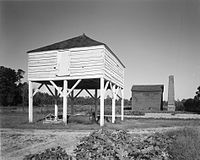 Empty beachfront has disappeared and wild areas are rapidly vanishing. A few wilder areas are being saved, as these provide critical habitat as part of the Atlantic Flyway for migratory birds. Huntington Beach State Park preserves some of the coastline and coastal marshes in the northern section, with nearby Brookgreen Gardens preserving a historical rice plantation and some forest. Brookgreen Gardens, with a nature center and many outdoor sculptures, is a popular tourist spot.

The University of South Carolina and Clemson University maintain the Belle W. Baruch research site at Hobcaw Barony on Waccamaw Neck. The islands around the outlet of Winyah Bay are designated as the "Tom Yawkey Wildlife Center Heritage Preserve". This area is home to the northernmost naturally occurring hammocks of South Carolina's signature sabal palmetto tree.

2. The riverfronts have had little recent development. Such properties were once used for rice plantations, using a rice variety brought from Africa. After the Civil War, and the loss of slave labor, the plantations gradually ceased production. Today they are primarily wild areas, accessible only by boat. In some areas, the earthworks, such as dikes and water gates used for rice culture, still exist, as well as a few of the plantation houses. Litchfield Plantation has been redeveloped as a country inn; other properties have been developed as planned residential communities. Great blue herons, alligators, and an occasional bald eagle can be seen along the waterways. Fishing is a popular activity. 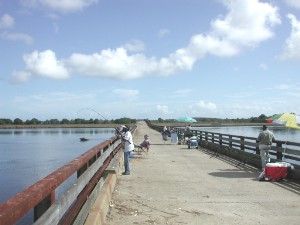 A tiny community accessible only by boat is on Sandy Island, in the Pee Dee River. Residents are descendants of slaves who worked plantations on the island, and they are trying to keep out development. Recently the Federal government began buying land along the rivers for the new Waccamaw Wildlife Refuge, which is intended to protect such wild areas. The headquarters of the refuge will be at Yauhannah in the northern part of the county.

3. Georgetown is a small historic city founded in colonial times. It is a popular tourist area and a port for shrimp boats. Yachting "snowbirds" are often seen at the docks in spring and fall; these people follow the seasons along the Intracoastal waterway.

4. The inland rural areas are thinly populated. Some upland areas are good for agriculture or forestry. Several Carolina bays are thought to be craters from a meteor shower. These areas are rich in biodiversity. Carvers Bay, the largest, was extensively damaged by use as a practice bombing range by US military forces during World War II. Draining of the bay has further damaged its environment. 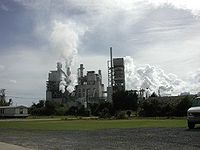 International Paper Company on the Sampit River. It is the largest employer in Georgetown County. 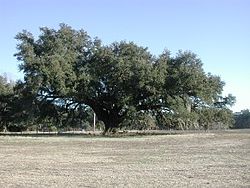