The Georgia Guidestones is a granite monument erected in 1980 in Elbert County, Georgia, in the United States. A set of 10 guidelines is inscribed on the structure in eight modern languages, and a shorter message is inscribed at the top of the structure in four ancient language scripts: Babylonian, Classical Greek, Sanskrit, and Egyptian hieroglyphs.

The monument stands at the highest point in Elbert County, about 90 miles (140 km) east of Atlanta, 45 miles (72 km) from Athens, and 9 miles (14 km) north of the center of Elberton. One slab stands in the center, with four arranged around it. A capstone lies on top of the five slabs, which are astronomically aligned. An additional stone tablet, which is set in the ground a short distance to the west of the structure, provides some notes on the history and purpose of the Guidestones. The structure is sometimes referred to as an "American Stonehenge".[1] The monument is 19 feet 3 inches (5.87 m) tall, made from six granite slabs weighing 237,746 pounds (107,840 kg) in all.[2] The designer and meaning of the Guidestones are unknown, leading to speculation and conspiracy theory.

In June 1979, a man using the self-confessed pseudonym Robert C. Christian approached the Elberton Granite Finishing company on behalf of "a small group of loyal Americans", and commissioned the structure. Christian explained that the stones would function as a compass, calendar and clock, and should be capable of withstanding catastrophic events. Joe Fendley of Elberton Granite assumed that Christian was "a nut" and attempted to discourage him by giving a quote several times higher than any project the company had taken, explaining that the Guidestones would require additional tools and consultants. Christian accepted the quote.[2] When arranging payment, Christian explained that he represented a group which had been planning the Guidestones for 20 years, and which intended to remain anonymous.[2]

Christian delivered a scale model of the Guidestones and ten pages of specifications.[2] The five-acre[2] land was apparently purchased by Christian on October 1, 1979,[3][4][non-primary source needed] from farm owner Wayne Mullinex.[2] Mullinex and his children were given lifetime cattle grazing rights on the Guidestones site.[2] The monument was unveiled on March 22, 1980, before an audience variously described as 100[5] or 400 people.[2] Christian later transferred ownership of the land and the Guidestones to Elbert County.[2]

In 2008, the stones were defaced with polyurethane paint and graffiti with slogans such as "Death to the new world order".[6] Wired magazine called the defacement "the first serious act of vandalism in the Guidestones' history".[2] In September 2014, an employee of the Elbert County maintenance department contacted the FBI when the stones were vandalized with graffiti including the phrase "I Am Isis, goddess of love".[7]

A message consisting of a set of ten guidelines or principles is engraved on the Georgia Guidestones[8] in eight different languages, one language on each face of the four large upright stones. Moving clockwise around the structure from due north, these languages are: English, Spanish, Swahili, Hindi, Hebrew, Arabic, Chinese, and Russian. 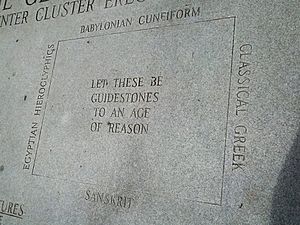 An explanatory tablet is set alongside the stones

A few feet to the west of the monument, an additional granite ledger has been set level with the ground. This tablet identifies the structure and the languages used on it, lists various facts about the size, weight, and astronomical features of the stones, the date it was installed, and the sponsors of the project. It also speaks of a time capsule buried under the tablet, but spaces on the stone reserved for filling in the dates on which the capsule was buried and is to be opened have not been inscribed, so it is uncertain if the time capsule was put in place.

The complete text of the explanatory tablet is detailed below. The tablet is somewhat inconsistent with respect to punctuation, misspells the word "pseudonym", and incorrectly uses the adjective "hieroglyphic" as a plural noun. The original spelling, punctuation, and line breaks in the text have been preserved in the transcription which follows (letter case is not). At the top center of the tablet is written:

Immediately below this is the outline of a square, inside which is written:

Let these be guidestones to an Age of Reason

Around the edges of the square are written the names of four ancient languages, one per edge. Starting from the top and proceeding clockwise, they are: Babylonian (in cuneiform script), Classical Greek, Sanskrit and Ancient Egyptian (in hieroglyphs). 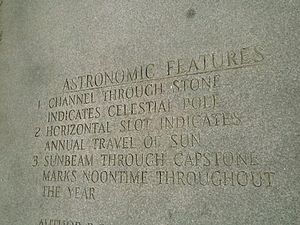 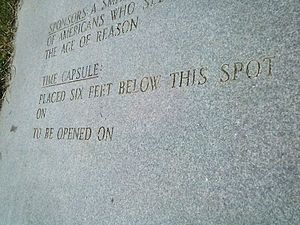 On the left side of the tablet is the following column of text:

Sponsors: A small group
of Americans who seek
the Age of Reason

The words appear as shown under the time capsule heading; no dates are engraved.

On the right side of the tablet is the following column of text (metric conversions added):

Below the two columns of text is written the caption "GUIDESTONE LANGUAGES", with a diagram of the granite slab layout beneath it. The names of eight modern languages are inscribed along the long edges of the projecting rectangles, one per edge. Starting from due north and moving clockwise around so that the upper edge of the northeast rectangle is listed first, they are English, Spanish, Swahili, Hindi, Hebrew, Arabic, Chinese, and Russian. At the bottom center of the tablet is the following text:

The four outer stones are oriented to mark the limits of the 18.6 year lunar declination cycle.[9] The center column features a hole drilled at an angle from one side to the other, through which can be seen the North Star, a star whose position changes only very gradually over time. The same pillar has a slot carved through it which is aligned with the Sun's solstices and equinoxes. A 7/8" aperture in the capstone allows a ray of sun to pass through at noon each day, shining a beam on the center stone indicating the day of the year.[2]

Yoko Ono and others have praised the inscribed messages as "a stirring call to rational thinking", while Wired stated that unspecified opponents have labeled them as the "Ten Commandments of the Antichrist".[2]

The Guidestones have become a subject of interest for conspiracy theorists. One of them, an activist named Mark Dice, demanded that the Guidestones "be smashed into a million pieces, and then the rubble used for a construction project",[10] claiming that the Guidestones are of "a deep Satanic origin", and that R. C. Christian belongs to "a Luciferian secret society" related to the "New World Order".[2] At the unveiling of the monument, a local minister proclaimed that he believed the monument was "for sun worshipers, for cult worship and for devil worship".[5] Others have suggested that the stones were commissioned by the Rosicrucians,[11] with conspiracy theorist Jay Weidner observing that the pseudonym of the man who commissioned the stones - "R. C. Christian" - resembles Rose Cross Christian, or Christian Rosenkreuz, the founder of the Rosicrucian Order.[2] Alex Jones's film Endgame: Blueprint for Global Enslavement proposes that the Guidestones are a harbinger of self-appointed elites who intend on exterminating most of the world's population.[12]

The most widely agreed-upon interpretation of the stones is that they describe the basic concepts required to rebuild a devastated civilization.[14] Author Brad Meltzer notes that the stones were built in 1979 at the height of the Cold War, and thus argues that they may have been intended as a message to the possible survivors of a nuclear World War III. The engraved suggestion to keep humanity's population below 500 million could have been made under the assumption that war had already reduced humanity below this number.[15]

The Guidestones were briefly shown and discussed in the 1986 documentary film Sherman's March, and were featured extensively in a 2012 episode of Mysteries at the Museum, a "Monumental Mysteries Special" featuring Don Wildman.[16]