Governor Nathan Deal is the titular head of the Georgia Republican Party. John Padgett is the current State Chairman. Adam Pipkin is the executive director. Randy Evans serves as Republican National Committeeman representing Georgia. Linda Herren serves as the National Committeewoman. Republicans hold every elected position in the state for the first time since Reconstruction.

The Republican National Committee (RNC) handles the national party day-to-day operations. Campaigns, events, and other party related activities are handled by the RNC. Reince Priebus is the current Chairman of RNC, having won the last election after controversial Chairman Michael Steele withdrew his rebid nomination. The chairman of the RNC is chosen by the President when the Republicans have the White House or otherwise by the party's state committees. Interestingly, there has never been a chairman from Georgia. The RNC, under the direction of the party's presidential candidate, supervises the Republican National Convention, raises funds, and coordinates campaign strategy. On the local level there are similar state committees in every state and most large cities, counties and legislative districts, but they have far less money and influence than the national body.[1]

Current and recent officeholders were primarily known as Democrats until the gradual change of the South. It was also customary for Southern States to propel actual skilled candidates to office, not career politicians. Character and experience in the South is seemingly a bigger deal than a charismatic figure.

After the American Civil War, Georgia was initially placed under a military governorship, but in 1868 the Republican Party succeeded in capturing the legislature and electing Rufus Bullock as governor. Support for the Republicans came from the 44% of the state's population that was African-American, along with whites from the mountainous north. Bullock was the first Republican governor of Georgia, but he was threatened with impeachment and fled the state in 1871, leaving the governorship to Benjamin Conley, the president of the Georgia Senate. (In modern times the lieutenant governor is the next in line if the governor cannot serve, but the role of lieutenant governor had not yet been created by that time.) Conley, the second Republican governor of the state, only lasted 72 days: the legislature quickly called a special election, and Conley was succeeded by a Democrat.[2]

These former Democrats were known as the Dixiecrats and for the first time since the civil war, broke up their huge voting power due to the issues that have plagued the South for 100 years.[3]

In 1961, a young man came to meet Georgia Republican Campaign Chairman Jeff Davis. The young man was Newt Gingrich, freshly introducing himself into Georgia Republican politics. He envisioned a competitive Republican Party with vast influence in the nation. Chairman Davis, being optimistic and cautious, worked with this young man to ensure victorious future elections.[4] In 1966 Republican Howard Callaway received the plurality of votes for governor but failed to win, when the election was decided by the Democratic Party-controlled Georgia legislature. In the 1970s, amid the Watergate Scandal, the rise of Democratic President Jimmy Carter from Georgia, led to the self-proclaimed "dark days" for the Republican Party that led to a decade of failed elections and tough incidents. Georgia Republicans struggled through the 1960s, 1970s and 1980s to become a major party, occasionally winning victories such as the election of House member Newt Gingrich in 1979. Also U.S. Senator Mack Mattingly was elected after, in 1980, only to see those gains erased in subsequent elections.

The Party's fortunes finally began to turn in the 1990s. During the decade, Republicans gained a majority in the congressional delegation after a redistricting plan adopted by the General Assembly Democrats backfired.[5] Also, Georgia played a pivotal role in national affairs, as Congressman Newt Gingrich propelled to the top, becoming Speaker of the U.S. House of Representatives.

In 2002 Sonny Perdue was elected as the first Republican governor of Georgia since Reconstruction. He served as Governor from 2003-2011 for two terms.[6] Republicans gained control of both chambers the state legislature in 2002 and 2004.

On September 28, 2011, it was revealed that Georgia intends to move their Republican Primary to Super Tuesday by December 1. The party feels that it should play a bigger role due to its size and number of delegates, and is moving forward with the notion that it can have an important say in this next election. Georgia Republican Party Chairwoman Sue Everhart said that having an early primary would make Georgia a bigger player in 2012. She added that she did not want to see the state lose delegates by going before March. "Since we became a red state, they haven't paid much attention to us," Everhart said, referring to GOP candidates and the RNC. "They use us as a donor state."[7]

The mascot (symbol) of the Georgia Republican Party is the elephant. The elephant was originally constructed by artist Thomas Nast, in response to the criticism of a possible third term by President Ulysses S. Grant. 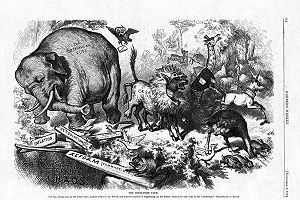 The cartoon's image was taken from one of Aesop's fables, "The Ass in the Lion's Skin." It follows up with, "At last coming upon a fox, he [the ass] tried to frighten him also, but the fox no sooner heard the sound of his voice than he exclaimed, 'I might possibly have been frightened myself, if I had not hear your bray.'" "The moral of the fable is that although a fool may disguise his appearance, his words will reveal his true nature. To Nast, the New York Herald is not a roaring lion to be feared, but a braying ass to be ridiculed. The reference in the citation to "Shakespeare or Bacon" is a jibe at Bennett's contention that Shakespeare's works were actually written by Sir Francis Bacon."

The elephant for the GOP rivals the Democrats' donkey.[8]

The Republican Party of Georgia controls both U.S. Senate seats and 10 of the 14 U.S. House seats. Republicans also control all 13 of the 13 state constitutional offices.

In 2002 Sonny Perdue was elected as the first Republican governor of Georgia since Reconstruction. He earned a doctorate from University of Georgia in 1971 in Veterinary Medicine. He served in the US Air Force, earning the rank of Captain, before receiving his honorable discharge and starting up a small business in Raleigh, N.C. He served 10 years beginning in 1990 as a Democrat in the Georgia State Senate, including a tenure as majority leader in 1995-1996. He served as Governor from 2003-2011 for two terms.[9]