Her father, John Spencer, 1st Earl Spencer, was a great-grandson of John Churchill, 1st Duke of Marlborough. Her niece was Lady Caroline Lamb. She was the great-great-great-great-aunt of Diana, Princess of Wales.

She attained a large amount of fame in her lifetime.[1][2][3] She became notorious for her marital arrangements, her catastrophic love affairs, and her love of gambling; she was famous for her beauty and her political campaigning; and she was a leader of fashionable style. 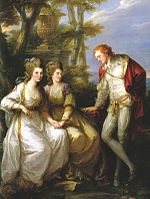 With her siblings, Henrietta and George, by Angelica Kauffman, c. 1774. The painting was painted just before Georgiana's marriage to the Duke of Devonshire

Lady Georgiana Spencer was born on 7 June 1757 to John Spencer and his wife Margaret Georgiana Poyntz (later Earl and Countess Spencer). After her daughter's birth, her mother wrote that "I will own I feel so partial to my Dear little Gee, that I think I never shall love another so well".[4] She had two younger siblings, Henrietta and George. She and her mother were very close and she was said to favour Georgiana over her other children. [4]

Lady Georgiana Spencer married the 5th Duke of Devonshire (then 25 years old) on her seventeenth birthday, 7 June 1774, at Wimbledon Parish Church.[5] He was one of the period's most eligible bachelors.[6]

The duchess introduced the duke to her best friend, Lady Elizabeth Foster (who later married the Duke), and lived in a triad with them for the next 25 years. Lady Elizabeth had two illegitimate children by the Duke, a son, Augustus Clifford and a daughter, Caroline Rosalie St Jules.

Politics and social and cultural life 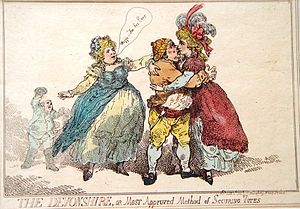 "THE DEVONSHIRE, or Most Approved Method of Securing Votes", by Thomas Rowlandson, 1784

The Duchess of Devonshire was a celebrated beauty and socialite who gathered around her a large salon of literary and political figures. She was connected to key figures of the age such as the Prince of Wales and Marie Antoinette.[7]

She was an active political campaigner in an age when women's suffrage was still more than a century away. The Spencers and the Cavendishes were Whigs. The Duchess of Devonshire campaigned for the Whigs—particularly for a distant cousin, Charles James Fox—at a time when the King (George III) and his ministers had a direct influence over the House of Commons, principally through their power of patronage. During the 1784 general election, the Duchess was rumoured to have traded kisses for votes in favour of Fox, and was satirised by Thomas Rowlandson in his print "THE DEVONSHIRE, or Most Approved Method of Securing Votes".

Famously, when she was stepping out of her carriage one day, an Irish dustman exclaimed: "Love and bless you, my lady, let me light my pipe in your eyes!", a compliment which she often recalled whenever others complimented her by retorting, "After the dustman's compliment, all others are insipid."[8][9]

The duchess was instrumental in formulating, with Thomas Beddoes, the idea of establishing the Pneumatic Institution in Bristol.[10] Her interest arose in part as she was related through marriage to the pneumatic chemist Henry Cavendish.

Cavendish wrote a number of works of both prose and poetry during her lifetime.

In 1779, she anonymously published the epistolary novel The Sylph. It has been speculated that The Sylph was written by Sophia Briscoe. A receipt at the British Library suggests that Briscoe was paid for The Sylph, but it is thought more likely that Briscoe may have served as an intermediary between the duchess and her publisher, so that Georgiana could keep her anonymity.[11]

The Duchess of Devonshire is famous for her marital arrangements, her catastrophic love affairs, her beauty and sense of style, her political campaigning, as well as her love of gambling. Even though her own family, the Spencers, and her husband's family, the Cavendishes, were immensely wealthy, she was reported to have died deeply in debt due to her excesses. She died on 30 March 1806, aged 48, from what was thought to be an abscess on her liver; she was buried at All Saints Parish Church in Derby. At her death, she owed the equivalent of £3,720,000.[12] She was so petrified of her husband discovering the extent of her debts that she kept them secret; the duke only discovered their extent after her death and remarked, "Is that all?"....[12]

The Duchess was a frequent sitter in portraits, including a 1787 work by Thomas Gainsborough that was once thought lost. In 1786, Susanna Rowson, who went on to become a bestselling author, dedicated her first published work, Victoria, to the Duchess of Devonshire,.