Georgios Nikolaou Papanikolaou (or George Papanicolaou; Greek: Γεώργιος Ν. Παπανικολάου; 13 May 1883 – 19 February 1962) was a Greek pioneer in cytopathology and early cancer detection, and inventor of the "Pap smear".

Papanikolaou studied at the University of Athens, where he received his medical degree in 1904. Six years later he received his PhD from the University of Munich, Germany, after he had also spent time at the universities of Jena and Freiburg.[1] In 1910, Papanikolaou returned to Athens and got married to Andromahi Mavrogeni and then departed for Monaco where he worked for the Oceanographic Institute of Monaco, participating in the Oceanographic Exploration Team of the Prince of Monaco (1911).[2]

In 1913 he emigrated to the U.S. in order to work in the department of Pathology of New York Hospital and the Department of Anatomy at the Cornell Medical College Cornell University.

He first reported that uterine cancer could be diagnosed by means of a vaginal smear in 1928, but the importance of his work was not recognized until the publication, together with Herbert Frederick Traut (1894–1963), of Diagnosis of Uterine Cancer by the Vaginal Smear in 1943. The book discusses the preparation of vaginal and cervical smears, physiologic cytologic changes during the menstrual cycle, the effects of various pathological conditions, and the changes seen in the presence of cancer of the cervix and of the endometrium of the uterus. He thus became known for his invention of the Papanicolaou test, commonly known as the Pap smear or Pap test, which is used worldwide for the detection and prevention of cervical cancer and other cytologic diseases of the female reproductive system.

In 1961 he moved to Miami, Florida, to develop the Papanicolaou Cancer Research Institute at the University of Miami, but died there on 19 February 1962[3][4] prior to its opening.

Papanicolaou was the recipient of the Albert Lasker Award for Clinical Medical Research in 1950.[5]

Papanikolaou's portrait appeared on the obverse of the Greek 10,000-drachma banknote of 1995–2001,[6] prior to its replacement by the euro.

In 1978 his work was honored by the U.S. Postal Service with a 13-cent stamp for early cancer detection. 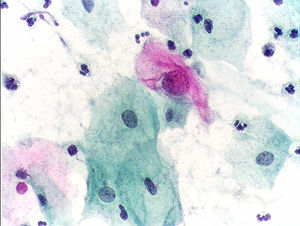 The fact that malignant cells could be seen under the microscope was first pointed out in a book on diseases of the lung, by Walter Hayle Walshe (1812–92), professor and physician to University College Hospital, London, in 1843. This fact was recounted by Papanikolaou.

In 1928 Papanikolaou told an incredulous audience of physicians about the noninvasive technique of gathering cellular debris from the lining of the vaginal tract and smearing it on a glass slide for microscopic examination as a way to identify cervical cancer. That year he had undertaken a study of vaginal fluid in women, in hopes of observing cellular changes over the course of a menstrual cycle. In female guinea pigs, Papanicolaou had already noticed cell transformation and wanted to corroborate the phenomenon in human females. It happened that one of Papanicolaou's human subjects was suffering from uterine cancer.

Upon examination of a slide made from a smear of the patient's vaginal fluid, Papanicolaou discovered that abnormal cancer cells could be plainly observed under a microscope. "The first observation of cancer cells in the smear of the uterine cervix," he later wrote, "gave me one of the greatest thrills I ever experienced during my scientific career."

The Romanian physician Aurel Babeş made similar discoveries in the cytologic diagnosis of cervical cancer.[7] He discovered that if a platinum loop was used to collect cells from a woman's cervix, and the cells were then dried on a slide and stained, it could be determined if cancer cells were present. This was the first screening test to diagnose cervical and uterine cancer. Babeş presented his findings to the Romanian Society of Gynaecology in Bucharest on 23 January 1927. His method of cancer diagnosis was published in a French medical journal, Presse Médicale, on 11 April 1928, but it is unlikely that Papanicolaou was aware of it. Moreover, the two techniques are different in their design. Therefore, although Babes publication preceded Papanicolaou, the design of the Pap test belongs to Papanicolaou since he had already tried it in 1925 in "Women's Hospital". Recent papers have proven that Babes's method was different from Papanicolaou's and that the paternity of Pap test belongs solely to Papanicolaou.[8] Despite this, it must be said that Aurel Babeş is viewed by most as the true pioneer in the cytologic diagnosis of cervical cancer,[7] and in a spirit of recognition and fairness, Romania refers to cervical testing as "Methode Babeş-Papanicolaou" in honor of Babeş.

At a 1928 medical conference in Battle Creek, Michigan, Papanicolaou introduced his low-cost, easily performed screening test for early detection of cancerous and precancerous cells. However, this potential medical breakthrough was initially met with skepticism and resistance from the medical community. Papanicolaou's next communication on the subject did not appear until 1941 when, with gynecologist Herbert Traut, he published a paper on the diagnostic value of vaginal smears in carcinoma of the uterus.[9] This was followed 2 years later by an illustrated monograph based on a study of over 3,000 cases. In 1954 he published another memorable work, the Atlas of Exfoliative Cytology, thus creating the foundation of the modern medical specialty of cytopathology.