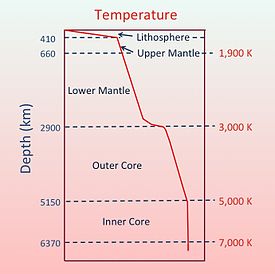 Geothermal gradient is the rate of increasing temperature with respect to increasing depth in the Earth's interior. Away from tectonic plate boundaries, it is about 25 °C per km of depth (1 °F per 70 feet of depth) near the surface in most of the world.[1] Strictly speaking, geo-thermal necessarily refers to the Earth but the concept may be applied to other planets. A line tracing the gradient through the planetary body is called a geotherm on Earth and other terrestrial planets. On the Moon it is called a selenotherm.

The Earth's internal heat comes from a combination of residual heat from planetary accretion, heat produced through radioactive decay, and possibly heat from other sources. The major heat-producing isotopes in the Earth are potassium-40, uranium-238, uranium-235, and thorium-232.[2] At the center of the planet, the temperature may be up to 7,000 K and the pressure could reach 360 GPa(3.6 million atm).[3] Because much of the heat is provided by radioactive decay, scientists believe that early in Earth history, before isotopes with short half-lives had been depleted, Earth's heat production would have been much higher. Heat production was twice that of present-day at approximately 3 billion years ago,[4] resulting in larger temperature gradients within the Earth, larger rates of mantle convection and plate tectonics, allowing the production of igneous rocks such as komatiites that are not formed anymore today.[5] 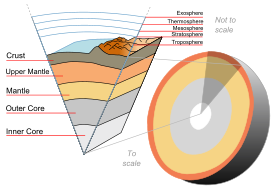 Earth cutaway from core to exosphere 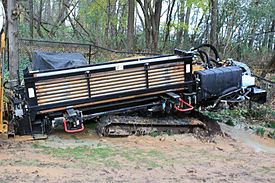 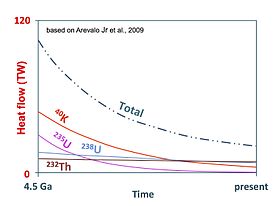 The radiogenic heat from the decay of 238U and 232Th are now the major contributors to the earth's internal heat budget.

In Earth's continental crust, the decay of natural radioactive isotopes has had significant involvement in the origin of geothermal heat. The continental crust is abundant in lower density minerals but also contains significant concentrations of heavier lithophilic minerals such as uranium. Because of this, it holds the largest global reservoir of radioactive elements found in the Earth.[10] Especially in layers closer to Earth's surface, naturally occurring isotopes are enriched in the granite and basaltic rocks.[11] These high levels of radioactive elements are largely excluded from the Earth's mantle due to their inability to substitute in mantle minerals and consequent enrichment in partial melts. The mantle is mostly made up of high density minerals with high contents of atoms that have relatively small atomic radii such as magnesium (Mg), titanium (Ti), and calcium (Ca).[10]

Heat flows constantly from its sources within the Earth to the surface. Total heat loss from the Earth is estimated at 44.2 TW (4.42 × 1013 watts).[13] Mean heat flow is 65 mW/m2 over continental crust and 101 mW/m2 over oceanic crust.[13] This is 0.087 watt/square meter on average (0.03 percent of solar power absorbed by the Earth[14] ), but is much more concentrated in areas where thermal energy is transported toward the crust by convection such as along mid-ocean ridges and mantle plumes.[15] The Earth's crust effectively acts as a thick insulating blanket which must be pierced by fluid conduits (of magma, water or other) in order to release the heat underneath. More of the heat in the Earth is lost through plate tectonics, by mantle upwelling associated with mid-ocean ridges. The final major mode of heat loss is by conduction through the lithosphere, the majority of which occurs in the oceans due to the crust there being much thinner and younger than under the continents.[13][16]

The heat of the Earth is replenished by radioactive decay at a rate of 30 TW.[17] The global geothermal flow rates are more than twice the rate of human energy consumption from all primary sources.

Heat from Earth's interior can be used as an energy source, known as geothermal energy. The geothermal gradient has been used for space heating and bathing since ancient Roman times, and more recently for generating electricity. As the human population continues to grow, so does energy use and the correlating environmental impacts that are consistent with global primary sources of energy. This has caused a growing interest in finding sources of energy that are renewable and have reduced greenhouse gas emissions. In areas of high geothermal energy density, current technology allows for the generation of electrical power because of the corresponding high temperatures. Generating electrical power from geothermal resources requires no fuel while providing true baseload energy at a reliability rate that constantly exceeds 90%.[10] In order to extract geothermal energy, it is necessary to efficiently transfer heat from a geothermal reservoir to a power plant, where electrical energy is converted from heat.[10] On a worldwide scale, the heat stored in Earth's interior provides an energy that is still seen as an exotic source. About 10 GW of geothermal electric capacity is installed around the world as of 2007, generating 0.3% of global electricity demand. An additional 28 GW of direct geothermal heating capacity is installed for district heating, space heating, spas, industrial processes, desalination and agricultural applications.[1] Because heat is flowing through every square meter of land, it can be used for a source of energy for heating, air conditioning (HVAC) and ventilating systems using ground source heat pumps. In areas where modest heat flow is present, geothermal energy can be used for industrial applications that presently rely on fossil fuels.[10]

The geothermal gradient varies with location and is typically measured by determining the bottom open-hole temperature after borehole drilling. To achieve accuracy the drilling fluid needs time to reach the ambient temperature. This is not always achievable for practical reasons.

In stable tectonic areas in the tropics a temperature-depth plot will converge to the annual average surface temperature. However, in areas where deep permafrost developed during the Pleistocene a low temperature anomaly can be observed that persists down to several hundred metres.[18] The Suwałki cold anomaly in Poland has led to the recognition that similar thermal disturbances related to Pleistocene-Holocene climatic changes are recorded in boreholes throughout Poland, as well as in Alaska, northern Canada, and Siberia. 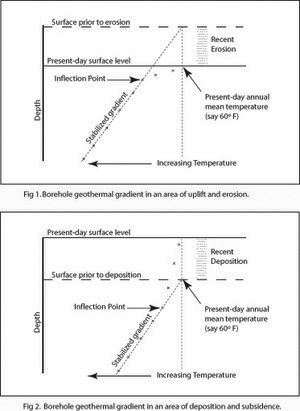 In deep boreholes, the temperature of the rock below the inflection point generally increases with depth at rates of the order of 20 K/km or more.[citation needed] Fourier's law of heat flow applied to the Earth gives q = Mg where q is the heat flux at a point on the Earth's surface, M the thermal conductivity of the rocks there, and g the measured geothermal gradient. A representative value for the thermal conductivity of granitic rocks is M = 3.0 W/mK.[citation needed] Hence, using the global average geothermal conducting gradient of 0.02 K/m we get that q = 0.06 W/m². This estimate, corroborated by thousands of observations of heat flow in boreholes all over the world, gives a global average of 6×10−2 W/m².[citation needed] Thus, if the geothermal heat flow rising through an acre of granite terrain could be efficiently captured, it would light four 60 watt light bulbs.

A variation in surface temperature induced by climate changes and the Milankovitch cycle can penetrate below the Earth's surface and produce an oscillation in the geothermal gradient with periods varying from daily to tens of thousands of years and an amplitude which decreases with depth and having a scale depth of several kilometers.[19][20] Melt water from the polar ice caps flowing along ocean bottoms tends to maintain a constant geothermal gradient throughout the Earth's surface.[19]

If that rate of temperature change were constant, temperatures deep in the Earth would soon reach the point where all known rocks would eventually melt. We know, however, that the Earth's mantle is solid because of the transmission of S-waves. The temperature gradient dramatically decreases with depth for two reasons. First, radioactive heat production is concentrated within the crust of the Earth, and particularly within the upper part of the crust, as concentrations of uranium, thorium, and potassium are highest there: these three elements are the main producers of radioactive heat within the Earth. Second, the mechanism of thermal transport changes from conduction, as within the rigid tectonic plates, to convection, in the portion of Earth's mantle that convects. Despite its solidity, most of the Earth's mantle behaves over long time-scales as a fluid, and heat is transported by advection, or material transport. Thus, the geothermal gradient within the bulk of Earth's mantle is of the order of 0.5 kelvin per kilometer, and is determined by the adiabatic gradient associated with mantle material (peridotite in the upper mantle).[21]

This heating up can be both beneficial or detrimental in terms of engineering: Geothermal energy can be used as a means for generating electricity, by using the heat of the surrounding layers of rock underground to heat water and then routing the steam from this process through a turbine connected to a generator.