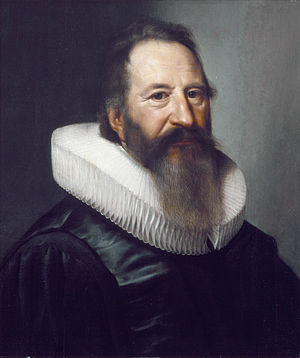 He was the son of Johannes (Jan) Vos, a Protestant from the Netherlands, who fled from persecution into the Electorate of the Palatinate and briefly became pastor in the village near Heidelberg where Gerardus (the Latinized form of Gerrit) was born, before friction with the strict Lutherans of the Palatinate caused him to settle the following year at the University of Leiden as student of theology, and finally became pastor at Dordrecht, where he died in 1585. Here in Dordrecht the son received his education, until in 1595 he entered the university of Leiden, where he became the lifelong friend of Hugo Grotius, and studied classics, Hebrew, church history and theology.

In 1600 he was made rector of the latin school in Dordrecht, and devoted himself to philology and historical theology. From 1614 to 1619 he was director of the theological college at Leiden University.

In the meantime, he was gaining a great reputation as a scholar, not only in the Netherlands, but also in France and England. But in spite of the moderation of his views and his abstention from controversy, he came under suspicion of heresy, and escaped expulsion from his office only by resignation (1619). The year before he had published his ‘Historia Pelagiana a history of the Pelagian controversies; at the time it was considered by some to favour the views of the Arminians or Remonstrants.

In 1622, he was appointed professor of rhetoric and chronology, and subsequently of Greek, in the university. He had many contacts in England; he declined invitations from Cambridge, but accepted from Archbishop Laud a prebend in Canterbury Cathedral without residence, and went to England to be installed in 1629, when he was made LL.D. at Oxford. He was on intimate terms with Thomas Farnaby, and Farnaby's ‘Latin Grammar’ is based to a certain extent upon that which Vossius wrote for the Elzevir press in 1629. Among his other English correspondents were Brian Duppa, Dudley Carleton, Lord Herbert of Cherbury, George Villiers, 1st Duke of Buckingham, the prelates James Ussher and Richard Sterne, and Christopher Wren.

He got permission from Charles I to return to the Low Countries. In 1632 he left Leiden to take the post of professor of history in the newly founded Athenaeum Illustre at Amsterdam, which he held till his death.

His son Isaac (1618–1689), after a career of scholarship in Sweden, became residentiary canon at Windsor in 1673. He was the author of De septuaginta interpretibus (1661), De poematum cantu et viribus rhythmi (1673), and Variarum observationum liber (1685).

A person also called Gerardus Vossius, a Roman Catholic born 1609, was not a son of Gerhardus Vossius. He made Latin versions and notes of Thaumaturgus, and Cicero. He died in Liège.[1]

Vossius was amongst the first to treat theological dogmas and the non-Christian religions from the historical point of view. His principal works are:

In rhetoric, his works enjoyed a wide circulation, being used as textbooks. He supported Aristotle's definitions, and opposed Ramism. With the major influences being Aristotle and Cicero, he also cited Hermogenes, Menander Rhetor, Bartholomeus Keckermann and Nicolas Caussin.[2]