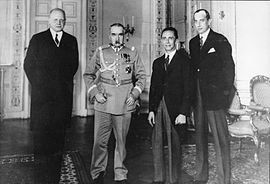 The German–Polish Non-Aggression Pact (German: Deutsch-polnischer Nichtangriffspakt; Polish: Polsko-niemiecki pakt o nieagresji ) was an international treaty between Nazi Germany and the Second Polish Republic signed on January 26, 1934. According to the Pact, both countries pledged to resolve their problems through bilateral negotiations and to forgo armed conflict for a period of ten years. It effectively normalized relations between Poland and Germany, which were previously strained by border disputes arising from the territorial settlement in the Treaty of Versailles. As a consequence of the treaty, Germany effectively recognized Poland's borders and moved to end an economically damaging customs war which existed between the two countries during the previous decade.

One of the most widely remarked-on of Józef Piłsudski's foreign-policy moves was his rumored proposal to France to declare war on Germany after Hitler had come to power in January 1933. Some historians write that Piłsudski may have sounded out France regarding the possibility of joint military action against Germany, which had been openly rearming in violation of the Versailles Treaty. France's refusal might have been one of the reasons Poland signed the German–Polish Non-Aggression Pact in January 1934.[1][2][3][4][5] However, the argument that the German-Polish non-aggression pact had been forced on Piłsudski by French refusal to wage a "preventive war" has been disputed by historians who point out that there is no evidence in either the French or Polish diplomatic archives that such a proposal was ever advanced. They state that when in late October 1933 rumors of a Polish "preventive-war" proposal were reported in Paris, their source was the Polish Embassy, which had informed French reporters that Poland had proposed a "preventive war" to France and Belgium; but by this time Poland and Germany were already secretly negotiating their non-aggression pact. It has been argued that Piłsudski had had the Polish Embassy start rumors about a "preventive war" as a way of pressuring the Germans, who were demanding that Poland abrogate its 1921 Franco-Polish alliance. In the event, the Polish-German non-aggression pact specifically excluded that alliance.[6]

It has been said that Piłsudski's reason for seeking a non-aggression pact with Germany was his concern over France's Maginot Line. Until 1929, French plans in the event of war with Germany had called for a French offensive into the North German plain in conjunction with offensives from Poland and Czechoslovakia. The building of the Maginot Line, begun in 1929, indicated that henceforth, in the event of war with Germany, the French Army would maintain a strictly defensive stance, and that France’s eastern allies were going to be on their own. (If this is true, then Piłsudski had successfully predicted the future: that is exactly what happened in 1939 with the Phoney War.) Thus, from Piłsudski's viewpoint, in light of France's military plans, a non-aggression pact with Germany was the best choice for Poland.

Józef Piłsudski used Adolf Hitler's rise to power and international isolation of Germany's new regime as an opportunity to reduce the risk that Poland would become the first victim of German aggression or of a Great Power deal (especially the Four Power Pact). Germany's new rulers seemed to depart from the traditionally Prussian anti-Polish orientation. Piłsudski regarded the new chancellor as less dangerous than his immediate predecessors, going back to Gustav Stresemann, and saw the Soviet Union as the greater threat, to the point where he opposed French and Czechoslovak efforts to include the Soviet Union in a common front against Nazi Germany.

In the text of the treaty the Poles insisted on stating that it did not nullify any previous international agreements, in particular the crucial alliance between Poland and France. Nevertheless, by easing Poland's disputes with Germany bilaterally, the treaty did weaken France's diplomatic position versus Germany.

To allay any fears that the warming of relations between Poland and its western neighbor were anything but peaceful, on May 5, 1934 Poland renewed the Polish-Soviet Non-Aggression Pact, first signed on July 25, 1932.

As a consequence of the treaty, Poland was able to maintain friendly relations with Germany for the next five years, while maintaining good relations with France and Great Britain, though it may have also led to foreign policy inattentiveness regarding the activities of the crumbling League of Nations and disinterest in the collective security schemes proposed by French in the early 1930s.

The 1934 Polish-German non-aggression pact, soon followed by a trade agreement with Germany, is said to have granted Germany a settled eastern border and allowed Hitler time for rearmament; five years later, he went on to successfully invade Poland.[7][8] Piłsudski, while distrusting German intentions on the whole, perceived Hitler's origins as an Austrian rather than a Prussian as a mitigating factor, and stated that he would like to see him in power as long as possible. [9] The pact has been seen as an instance of political weakness brought on by Piłsudski's illness, and likened to the interwar lack of leadership displayed by Neville Chamberlain and Paul von Hindenburg.[10]

German policy changed drastically in late 1938, after the annexation of Sudetenland sealed the fate of Czechoslovakia and Poland became Hitler's next target. In October 1938 the Nazi foreign minister Joachim Ribbentrop presented Poland with the proposition of renewing the nonaggression treaty in exchange for allowing the Free City of Danzig (Gdańsk) to be annexed by Germany and for permitting the building of an extraterritorial motorway and railway between East Prussia and Germany proper through the Polish Corridor, as well as Germany accepting Poland's post war borders.[11] Poland refused to accept these demands. As a consequence, the non-aggression pact was unilaterally abrogated by Adolf Hitler on April 28, 1939,[12] during an address before the Reichstag, as Germany renewed its territorial claims in Poland. After another few months of rising tension, Germany invaded Poland on September 1, 1939, initiating World War II.