The German American Bund, or German American Federation (German: Amerikadeutscher Bund; Amerikadeutscher Volksbund, AV), was an American Nazi organization established in 1936 to succeed Friends of New Germany (FONG), the new name being chosen to emphasise the group's American credentials after press criticism that the organisation was unpatriotic.[2] The Bund was to consist only of American citizens of German descent.[3] Its main goal was to promote a favorable view of Nazi Germany.

In May 1933, Nazi Deputy Führer Rudolf Hess gave German immigrant and German Nazi Party member Heinz Spanknöbel authority to form an American Nazi organization.[4] Shortly thereafter, with help from the German consul in New York City, Spanknöbel created the Friends of New Germany[4] by merging two older organizations in the United States, Gau-USA and the Free Society of Teutonia, which were both small groups with only a few hundred members each. The FONG was based in New York but had a strong presence in Chicago.[4] Members wore a uniform, a white shirt and black trousers for men with a black hat festooned with a red symbol. Women members wore a white blouse and a black skirt.[5]

The organization led by Spanknöbel was openly pro-Nazi, and engaged in activities such as storming the German language New Yorker Staats-Zeitung with the demand that Nazi-sympathetic articles be published, and the infiltration of other non-political German-American organizations. One of the Friends early initiatives was to counter, with propaganda, the Jewish boycott of German goods which started in March 1933 to protest Nazi anti-Semitism.

In an internal battle for control of the Friends, Spanknöbel was ousted as leader and subsequently deported in October 1933 because he had failed to register as a foreign agent.[4]

At the same time, Congressman Samuel Dickstein – who many years later was revealed to have been a Soviet spy – was Chairman of the Committee on Naturalization and Immigration, where he became aware of the substantial number of foreigners legally and illegally entering and residing in the country, and the growing anti-Semitism along with vast amounts of anti-Semitic literature being distributed in the country. This led him to investigate independently the activities of Nazi and other fascist groups, leading to the formation of the Special Committee on Un-American Activities Authorized to Investigate Nazi Propaganda and Certain Other Propaganda Activities. Throughout the rest of 1934, the Committee conducted hearings, bringing before it most of the major figures in the American fascist movement.[6] Dickstein's investigation concluded that the Friends represented a branch of German dictator Adolf Hitler's Nazi Party in America.[7][8]

The organization existed into the mid-1930s, although it always remained small, with a membership of between 5,000–10,000, consisting mostly of German citizens living in America and German emigrants who only recently had become citizens.[4] In December 1935, Rudolf Hess ordered all German citizens to leave the FONG and recalled all of its leaders to Germany .[4] 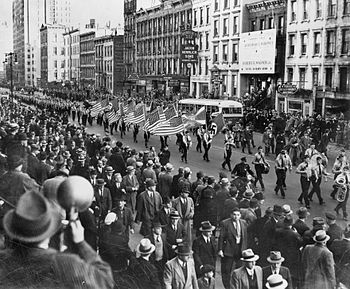 In March 1936, the German American Bund was established as a follow-up organization for the Friends of New Germany in Buffalo, New York.[4][9] The Bund elected a German-born American citizen Fritz Julius Kuhn as its leader (Bundesführer).[10] Kuhn was a veteran of the Bavarian infantry during World War I and an Alter Kämpfer (old fighter) of the Nazi Party, who in 1934 was granted American citizenship. Kuhn was initially effective as a leader and was able to unite the organization and expand its membership but came to be seen simply as an incompetent swindler and liar.[4]

The administrative structure of the Bund mimicked the regional administrative subdivision of the Nazi Party. The United States was divided into three Gaue: Gau Ost (East), Gau West and Gau Midwest.[11] Together the three Gaue comprised 69 Ortsgruppen (local groups): 40 in Gau Ost (17 in New York), 10 in Gau West and 19 in Gau Midwest.[11] Each Gau had its own Gauleiter and staff to direct the Bund operations in the region in accordance with the führerprinzip.[11] The Bund's national headquarters was located at 178 East 85th Street in the New York City borough of Manhattan.[1]

The Bund established a number of training camps, including Camp Nordland in Sussex County, New Jersey, Camp Siegfried in Yaphank, New York, Camp Hindenburg in Grafton, Wisconsin, Deutschhorst Country Club in Sellersville, Pennsylvania,[12] Camp Bergwald in Bloomingdale, NJ[4][13][14][15][12] and Camp Highland in New York state. The Bund held rallies with Nazi insignia and procedures such as the Hitler salute and attacked the administration of President Franklin D. Roosevelt, Jewish groups, Communism, "Moscow-directed" trade unions and American boycotts of German goods.[4][16] The organization claimed to show its loyalty to America by displaying the flag of the United States at Bund meetings, and declared that George Washington was "the first Fascist" who did not believe democracy would work.[17]

Kuhn and a few other Bundmen traveled to Berlin to attend the 1936 Summer Olympics. During the trip he visited the Reich Chancellery, where his picture was taken with Hitler.[4] This act did not constitute an official Nazi approval for Kuhn's organization: German Ambassador to the United States Hans-Heinrich Dieckhoff expressed his disapproval and concern over the group to Berlin, causing distrust between the Bund and the Nazi regime.[4] The organization received no financial or verbal support from Germany. In response to the outrage of Jewish war veterans, Congress in 1938 passed the Foreign Agents Registration Act requiring foreign agents to register with the State Department. On March 1, 1938 the Nazi government decreed that no Reichsdeutsche [German nationals] could be a member of the Bund, and that no Nazi emblems were to be used by the organization.[4] This was done both to appease the U.S. and to distance Germany from the Bund, which was increasingly a cause of embarrassment with its rhetoric and actions.[4] 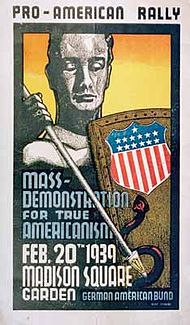 Arguably, the zenith of the Bund's activities was the rally at Madison Square Garden in New York City on February 20, 1939.[18] Some 20,000 people attended and heard Kuhn criticize President Roosevelt by repeatedly referring to him as "Frank D. Rosenfeld", calling his New Deal the "Jew Deal" and denouncing what he believed to be Bolshevik-Jewish American leadership. Most shocking to American sensibilities was the outbreak of violence between protesters and Bund storm troopers.

In 1939, a New York tax investigation determined that Kuhn had embezzled $14,000 from the Bund. The Bund did not seek to have Kuhn prosecuted, operating on the principle (Führerprinzip), that the leader had absolute power. However, New York City's district attorney prosecuted him in an attempt to cripple the Bund. On December 5, 1939, Kuhn was sentenced to two and a half to five years in prison for tax evasion and embezzlement.[19]

New Bund leaders replaced Kuhn, most notably Gerhard Kunze, but only for brief periods. A year after the outbreak of World War II, Congress enacted a peacetime military draft in September 1940. The Bund counseled members of draft age to evade conscription, a criminal offense punishable by up to five years in jail and a $10,000 fine. Gerhard Kunze fled to Mexico in November 1941.[5]

While Kuhn was in prison, his citizenship was canceled on June 1, 1943.[20] Upon his release after 43 months in state prison, Kuhn was re-arrested on June 21, 1943 as an enemy alien and interned by the federal government at a camp in Crystal City, Texas. After the war, Kuhn was interned at Ellis Island and deported to Germany on September 15, 1945.[20] He died on December 14, 1951, in Munich, Germany.