The Imperial German Army (Deutsches Heer) was the name given to the combined land and air forces of the German Empire (excluding the Marine-Fliegerabteilung maritime aviation formations of the Kaiserliche Marine). The term Deutsches Heer is also used for the modern German Army, the land component of the Bundeswehr. The German Army was formed after the unification of Germany under Prussian leadership in 1871 and dissolved in 1919, after the defeat of the German Empire in World War I. 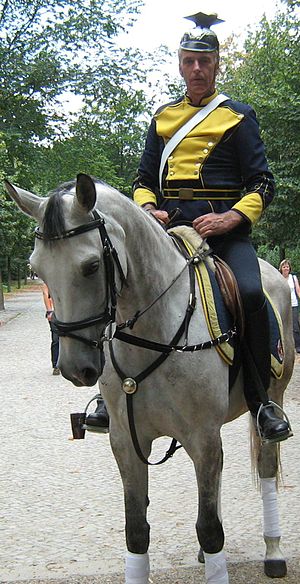 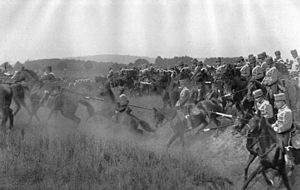 German Army hussars on the attack during maneuvers, 1912. 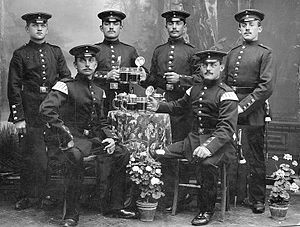 The states which made up the German Empire contributed their armies; within the German Confederation, formed after the Napoleonic Wars, each state was responsible for maintaining certain units to be put at the disposal of the Confederation in case of conflict. When operating together, the units were known as the Federal Army (Bundesheer). The Federal Army system functioned during various conflicts of the 19th century, such as the First Schleswig War from 1848–50 but by the time of the Second Schleswig War of 1864, tension had grown between the main powers of the confederation, the Austrian Empire and the Kingdom of Prussia and the German Confederation was dissolved after the Austro-Prussian War of 1866.

Prussia formed the North German Confederation and the treaty provided for the maintenance of a Federal Army and a Federal Navy (Bundesmarine or Bundeskriegsmarine).[1] Further laws on military duty also used these terms.[2] Conventions (some later amended) were entered into between the North German Confederation and its member states, subordinating their armies to the Prussian army in time of war, and giving the Prussian Army control over training, doctrine and equipment.[3]

Shortly after the outbreak of the Franco-Prussian War in 1870, the North German Confederation also entered into conventions on military matters with states that were not members of the confederation, the Bavaria, Württemberg, and Baden.[4] Through these conventions and the 1871 Constitution of the German Empire, an Army of the Realm (Reichsheer) was created. The contingents of the Bavarian, Saxon and Württemberg kingdoms remained semi-autonomous, while the Prussian Army assumed almost total control over the armies of the other states of the Empire. The Constitution of the German Empire, dated April 16, 1871, changed references in the North German Constitution from Federal Army to either Army of the Realm ("Reichsheer") or German Army ("Deutsches Heer").[5]

After 1871 the peacetime armies of the four kingdoms remained relatively distinct. "German Army" was used in various legal documents such as the Military Penal Code but otherwise the Prussian, Bavarian, Saxon and Württemberg armies maintained distinct identities.[6] Each kingdom had its own War Ministry, Bavaria and Saxony published their own rank and seniority lists for their officers and the Württemberg list was a separate chapter of the Prussian army rank lists. Württemberg and Saxon units were numbered according to the Prussian system but Bavarian units maintained their own numbers (the 2nd Württemberg Infantry Regiment was Infantry Regiment No. 120 under the Prussian system).

Command of the Prussian Army had been reformed in the wake of the defeats suffered by Prussia in the Napoleonic Wars. Rather than rely primarily on the martial skills of the individual members of the German nobility, who dominated the military profession, the Prussian Army instituted changes to ensure excellence in leadership, organization and planning. The General Staff system, that sought to institutionalize military excellence, was the main result. It sought to identify military talent at the lower levels and develop it thoroughly through academic training and practical experience on division, corps and higher staffs, up to the Great General Staff, the senior planning body of the army. It provided planning and organizational work during peacetime and wartime. The Prussian General Staff, proven in battle in the Wars of Unification, became the German General Staff upon formation of the German Empire, given Prussia's leading role in the German Army. 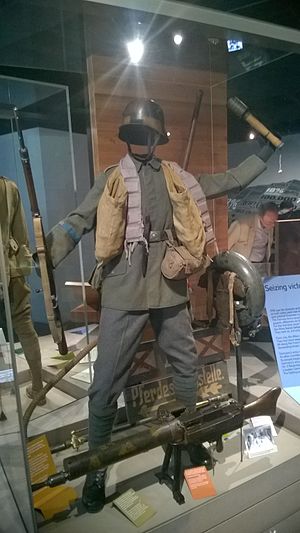 The basic peacetime organizational structure of the Imperial German Army were the Army inspectorate (Armee-Inspektion), the army corps (Armeekorps), the division and the regiment. During wartime, the staff of the Army inspectorates formed field army commands, which controlled the corps and subordinate units. During World War I, a higher command level, the army group (Heeresgruppe) was created. Each army group controlled several field armies.

Germany was divided into army inspectorates, each of which oversaw three or four corps. There were five in 1871, with three more added between 1907 and 1913.[7]

The basic organizational formation was the army corps (Armeekorps). The corps consisted of two or more divisions and various support troops, covering a geographical area. The corps was also responsible for maintaining the reserves and Landwehr in the corps area. By 1914, there were 21 corps areas under Prussian jurisdiction and three Bavarian army corps. Besides the regional corps, there was also a Guard Corps (Gardecorps), which controlled the elite Prussian Guard units. A corps usually included a light infantry (Jäger) battalion, a heavy artillery (Fußartillerie) battalion, an engineer battalion, a telegraph battalion and a trains battalion. Some corps areas also disposed of fortress troops; each of the 25 corps had a Field Aviation Unit (Feldflieger Abteilung) attached to it normally equipped with six unarmed "A" or "B" class unarmed two-seat observation aircraft apiece.[8]

In wartime, the army corps became a mobile tactical formation and four Höhere Kavallerie-Kommando (Higher Cavalry Commands) were formed from the Cavalry Inspectorate, the equivalent of corps, being made up of two divisions of cavalry.

The areas formerly covered by the corps each became the responsibility of a Wehrkreis (Military District, sometimes translated as Corp Area). The Military Districts were to supervise the training and enlistment of reservists and new recruits. Originally each Military District was linked to an army corps; thus Wehrkreis I took over the area that I. Armeekorps had been responsible for and sent replacements to the same formation. The first sixteen Reserve Corps raised followed the same pattern; X. Reserve-Korps was made up of reservists from the same area as X. Armeekorps. These links between rear areas and front line units were broken as the war went on however and later corps were raised with troops from all over Germany.

The regiment was the basic combat unit as well as the recruiting base for soldiers. When inducted, a soldier entered a regiment, usually through its replacement battalion, and received his basic training. There were three basic types of regiment: infantry, cavalry and artillery. Other specialties, such as pioneers (combat engineers) and signal troops, were organized into smaller support units. Regiments also carried the traditions of the army, in many cases stretching back into the 17th and 18th centuries. After World War I, regimental traditions were carried forward in the Reichswehr and its successor, the Wehrmacht, but the chain of tradition was broken in 1945 as West German and East German units did not carry forward pre-1945 traditions.

When the British decided to reform their army in the 1860s, they surveyed the major European forces and decided that the Prussian system was the best one. That system was continued into the Imperial Army after 1871 and resulted in a modest cadre of professional officers and sergeants, and a large reserve force that could be quickly mobilised at the start of a war. The British could not use the system because they rejected conscription. The Japanese, however, were also observing the reserve system and, unlike the British, decided to copy the Prussian model.[9] Barnett explains that every young man was drafted at age 18, with the upper-class becoming officers:

the Prussian system... was based on service of only three years with the colors... and four years in the reserve. The Prussian standing army had become simply a training cadre for the intake of conscripts. The Prussian army's organization for peace and war was virtually the same. Prussia was divided into army-corps districts for the purposes both of administration and of recruitment. On the outbreak of war the command organizations of the district became that of a corps in the field. Localization of the Army and its recruitment gave the districts pride and interest in their 'own' corps.[10]

Germany had the largest industrial base in Europe, surpassing Britain by 1900. The Army closely cooperated with industry, especially in the World War, with particular focus on the very rapidly changing aircraft industry. The Army set prices and labor exemptions, regulated the supply of credit and raw materials, limited patent rights so as to allow cross-licensing among firms, and supervised management–labor relationships. The result was very rapid expansion and a high output of high quality aircraft, as well as high wages that attracted the best machinists. Apart from aircraft the Army's regulation of the rest of the war economy was inefficient.[11]

The Deutsche Luftstreitkräfte, known before 1916 as Die Fliegertruppen des deutschen Kaiserreiches (Imperial German Flying Troops),[12] was the over-land air arm of the German Army during World War I (1914–1918). Although its name actually means something very close to "The German Air Force" it remained an integral part of the German Army for the duration of the war.

Ranks of the Imperial German Army

The German Army from 1871 to 1914 inherited the various traditions and military ranks of its constituent states, thus becoming a truly federal armed service.

Note: Einjährig-Freiwilliger and Kapitulant were not ranks as such during this specific period of use, but voluntary military enlistee designations. They however, wore a specific uniform distinction (twisted wool piping along their shoulder epaulette edging for Einjährig-Freiwilliger, the Kapitulant a narrow band across their lower shoulder epaulette) in the colours of their respective nation state. This distinction was never removed throughout their military service nor during any rank grade advancements.

Critics long believed that officer corps of the Army was heavily dominated by Junker aristocrats, so that commoners were shunted into low-prestige branches such as the heavy artillery or supply. However, by the 1890s the top ranks were opened to highly talented commoners.[19][20]

The Imperial Army was abolished on 6 March 1919, and the provisional Reichswehr was created.[21]