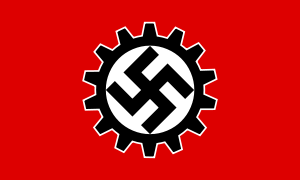 Flag of the DAF 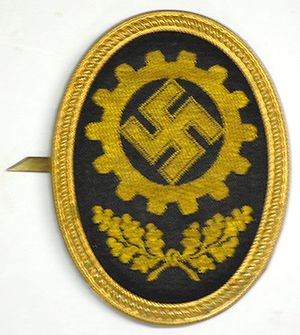 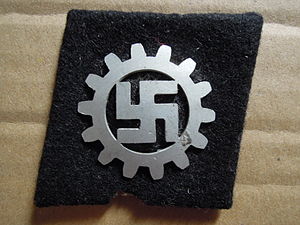 Its leader was Robert Ley, who stated its aim was 'to create a true social and productive community' (Smelster, 1988). Theoretically, DAF existed to act as a medium through which workers and owners could mutually represent their interests. Wages were set by the 12 DAF trustees. The employees were given relatively high set wages and security of employment, and dismissal was increasingly made difficult. Social security and leisure programmes were started, canteens, breaks, and regular working times were established, and German workers were generally satisfied by what the DAF gave them in repayment for their absolute loyalty.

Employment contracts created under the Weimar Republic were abolished and renewed under new circumstances in the DAF. Employers could demand more of their workers, while at the same time workers were given increased security of work and increasingly enrolled into social security programmes for workers. The organisation, by its own definition, combated capitalism and liberalism, but also revolution against the factory owners and the national socialist state. The DAF, however, did openly prefer to have large companies nationalised by the German state, instead of privately owned companies.

DAF membership was theoretically voluntary, but any workers in any area of German commerce or industry would have found it hard to get a job without being a member. Membership required a fee within the range of 15 pfennig to 3 Reichsmark, depending on the category a member fell into in a large scale of 20 membership groups. A substantially large amount of income was raised through fees. In 1934, the total intake was 300,000,000 Reichsmark.

There were 2 main components of the DAF and these were:

Several other sub-organisations were set up:

The Front also organised the Reichsberufswettkampf, a national vocational competition.