The German National Library in Frankfurt

The German National Library (German: Deutsche Nationalbibliothek or DNB) is the central archival library and national bibliographic centre for the Federal Republic of Germany. Its task is to collect, permanently archive, comprehensively document and record bibliographically all German and German-language publications since 1913, foreign publications about Germany, translations of German works, and the works of German-speaking emigrants published abroad between 1933 and 1945, and to make them available to the public.[2] The German National Library maintains co-operative external relations on a national and international level. For example, it is the leading partner in developing and maintaining bibliographic rules and standards in Germany and plays a significant role in the development of international library standards. The cooperation with publishers is regulated by law since 1935 for the Deutsche Bücherei Leipzig and since 1969 for the Deutsche Bibliothek Frankfurt.

Duties are shared between the facilities in Leipzig and Frankfurt am Main, with each center focusing its work in specific specialty areas. A third facility, the Deutsches Musikarchiv Berlin (founded 1970), deals with all music-related archiving (both printed and recorded materials).

During the German revolutions of 1848 various booksellers and publishers offered their works to the Frankfurt Parliament for a parliamentary library. The library, led by Johann Heinrich Plath, was termed the Reichsbibliothek ("Reich library"). After the failure of the revolution the library was abandoned and the stock of books already in existence was stored at the Germanisches Nationalmuseum in Nuremberg.[3] In 1912, the town of Leipzig, seat of the annual Leipzig Book Fair, the Kingdom of Saxony and the Börsenverein der Deutschen Buchhändler (Association of German booksellers) agreed to found a German National Library in Leipzig. Starting January 1, 1913, all publications in German were systematically collected (including books from Austria and Switzerland). In the same year, Dr. Gustav Wahl was elected as the first director.

In 1946 Dr. Georg Kurt Schauer, Heinrich Cobet, Vittorio Klostermann and Professor Hanns Wilhelm Eppelsheimer, director of the Frankfurt University Library, initiated the re-establishment of a German archive library based in Frankfurt. The Federal state representatives of the book trade in the American zone agreed to the proposal. The city of Frankfurt agreed to support the planned archive library with personnel and financial resources. The US military government gave its approval. The Library began its work in the tobacco room of the former Rothschild library, which served the bombed university library as accommodation. As a result, there were two libraries in Germany, which assumed the duties and function of a national library for the later GDR and the Federal Republic of Germany, respectively. Two national bibliographic catalogues almost identical in content were published annually.

With the reunification of Germany on 3 October 1990, the Deutsche Bücherei Leipzig and the Deutsche Bibliothek Frankfurt am Main were merged into a new institution, The German Library (Die Deutsche Bibliothek). The "Law regarding the German National Library" came into force on 29 June 2006. The expansion of the collection brief to include online publications set the course for collecting, cataloguing and storing such publications as part of Germany's cultural heritage. The Library's highest management body, the Administrative Council, was expanded to include two MPs from the Bundestag. The law also changed the name of the library and its buildings in Leipzig, Frankfurt am Main and Berlin to "Deutsche Nationalbibliothek".

In July 2000, the DMA also assumed the role as repository for GEMA, Gesellschaft für musikalische Aufführungs- und mechanische Vervielfältigungsrechte, a German music copyright organization. Since then, music publishers only have to submit copies to DMA, which covers both national archiving and copyright registration. The 210,000 works of printed music previously held by GEMA were transferred to DMA.

One of the special activities of the German National Library involves the collection and processing of printed and non-printed documents of German-speaking emigrants and exiles during the period from 1933 to 1945.

In 1998 the German National Library and the German Research Foundation began a publicly funded project to digitise the “Jewish Periodicals in Nazi Germany” collection of approximately 30,000 pages, which were originally published between 1933 and 1943. Additionally included in the project were 30 German-language emigrant publications "German-language exile journals 1933–1945", consisting of around 100,000 pages. These collections were put online in 2004 and were some of the most frequently visited sites of the German National Library.

In June 2012 the German National Library discontinued access to both collections on its website for legal reasons. The digitised versions are since then available for use in the reading rooms of the German National Library in Leipzig and Frankfurt am Main only, which caused partly harsh criticism.[4] The German National Library cited concerns over copyright as the reason, claiming that although the Library and the German Research Foundation had permission from the owners of the publication to put them online, the ownership of the “orphaned articles”, that is, the individual authors, could not be ascertained as would be necessary because German legislation does not include a "fair use clause".

The Jewish German-language newspaper haGalil called the libraries action "overzealous." Yves Kugelmann, the head of Jüdische Medien AG in Zürich, which owns the rights to Aufbau magazine, one of the Exile Archive’s offerings, called the action “completely absurd, confusing, and without merit.” Dr. Anne Lipp of the German Research Foundation concluded that "all projects of the foundation,” which have been paid for by public funding and with the intent of publishing online, “must be made public.”[5]

Dr. Asmus, head of Deutsches Exilarchiv, claims that the ownership of articles from over 13,000 individual authors must first be confirmed and permissions obtained before the 70- to 80-year-old articles may be put online again, despite having had permission from the rightful owners of the publications to put the articles online. Asmus admits that there was not one single complaint of copyright violation.[6] Meanwhile, other German and international institutions such as Compact Memory, the Leo Baeck Institute and Archive.org have no such compunctions and have begun restoring many of the deleted periodicals to the internet again.[7]

The Deutsches Musikarchiv (DMA, German Music Archive) is the central collection of printed and recorded music and the music-bibliographic information centre for Germany. It is a Federal agency founded in 1970, tasked with collecting all music published in the country. Its precursor was the Deutsche Musik-Phonothek (1961–1969). The DMA moved to Leipzig in 2010, to be housed in an extension of the Deutsche Nationalbibliothek. Construction work began in 2006 and was completed in 2009.

Formerly situated in Berlin-Lankwitz, the DMA constitutes a department of the German National Library (Deutsche Nationalbibliothek). Publishers of printed and recorded music in Germany are required by law (since 1973) to deliver two copies of every edition to the archive. One copy is kept at the DMA in Leipzig, the second is deposited in Frankfurt.

Coordinates: Lua error in Module:Coordinates at line 668: callParserFunction: function "#coordinates" was not found. 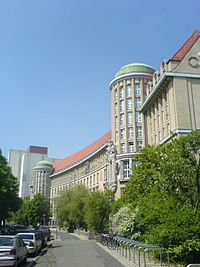 The German National Library in Leipzig

The main building of the German National Library in Leipzig was built 1914–1916 after plans of the architect Oskar Pusch. The impressive facade is 160 m long and faces the "Deutscher Platz" (German Plaza). The building was opened on October 19, 1916, one day after the Monument to the Battle of the Nations. The site of the library had been donated by the city of Leipzig, while Friedrich August III, King of Saxony provided the funds for the building. On the facade, the portraits of Otto von Bismarck, Johann Wolfgang von Goethe and Johannes Gutenberg are displayed. Statues represent Technology, Justice, Philosophy, Medicine etc. The central reading room contains a picture by Ludwig von Hofmann, depicting Arcadia in Art Nouveau-style. The staircase displays a mural showing the founders of the German library. The Library also contains a museum for books and letters. An extension was completed in 2010. 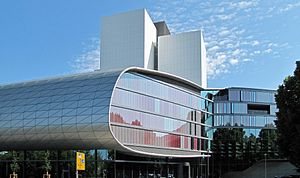