From Infogalactic: the planetary knowledge core
Jump to: navigation, search
This article is about the German word Reich, and in particular its historical and political implications. For other uses, see Reich (disambiguation).

Deutsches Reich (German: [ˈdɔʏtʃəs ˈʀaɪç]) was the official name for the German nation state from 1871 to 1943 in German language. It translates literally to "German Empire", with a context approximating that of "German Realm".[1] From 1943 to 1945, the official name was – but not formally proclaimed – Großdeutsches Reich ("Greater German Reich") on account of the new territories annexed into the state's administration during the Second World War.

To refer to the entire period, the partially translated "German Reich" /ˈdʒɜːrmən ˈraɪk/, which has no monarchical connotations, is often used,[2] with "German Realm" being a more appropriate direct translation of the official title.[1] Informally, this nation was also known simply as Germany.

There were three periods in the history of the Reich:

The 1918–1933 Weimar period, which is also called German Reich is ignored and denounced by the Nazis as a historical aberration, contemptuously referring to it as "the System".

In a 1923 book entitled Das Dritte Reich by Arthur Moeller van den Bruck,[3] that counted the medieval Holy Roman Empire as the first and the 1871–1918 monarchy as the second, which was then to be followed by a "reinvigorated" third one.

The name Deutsches Reich was occasionally applied in contemporary maps to the Holy Roman Empire (911–1806), also called "Holy Roman Empire of the German Nation" from the 16th century onwards, though it constituted a supranational entity extending beyond the frontiers of the German language area (Sprachraum). The first attempt to establish a "German Empire" during the 1848 March Revolution by the Frankfurt Constitution ultimately failed: it was aborted by the monarchs of the German Confederation, especially by the King of Prussia, fighting German nationalism, which then was tied to the idea of popular sovereignty.

Following the Anschluss annexation of Austria in 1938, Nazi Germany informally named itself the Greater German Reich (German: Großdeutsches Reich). This name was made the official state name only during the last two years (1943–45) of Nazi rule under Adolf Hitler,[4] though the change was never proclaimed. After World War II, the denotation "German Reich" quickly fell into disuse in Allied-occupied Germany, however, the state's continued existence remained a matter of debate (see below).

The difference between "Reich" and "Empire" 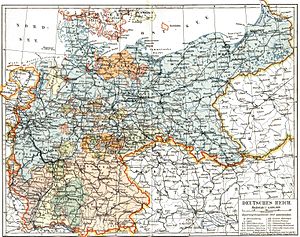 Though the German word Reich translates to the English word "empire" (it also translates to such words as "realm" or "domain"), this translation was not used throughout the full existence of the German Reich. Historically, only Germany from 1871 to 1918 — when Germany was under the rule of an emperor (Kaiser) — is known in English as the "German Empire" (Deutsches Kaiserreich in German historiography), while the term "German Reich" describes Germany from 1871 to 1945.[2] As the literal translation "German Empire" denotes a monarchy, the term is used only in reference to Germany before the fall of the monarchies at the end of World War I in 1918.

After the unification of Germany, under the reign of the Prussian king Wilhelm I and his Chancellor Otto von Bismarck, the German states (e.g., the kingdoms of Prussia, Bavaria, and Saxony) were united under imperial rule by the Hohenzollern dynasty. On 18 January 1871, Wilhelm I was proclaimed German Emperor at the Hall of Mirrors in Versailles, the German Reich was officially declared Deutsches Reich, or "German Empire",[5] referring to the extinct Holy Roman Empire. On 14 April 1871, the Reichstag parliament passed the Constitution of the German Empire (Verfassung des Deutschen Reiches), which was published two days later.

However, originating from the North German Confederation, the Empire never comprised all "German" lands, excluding those Cisleithanian crown lands of Austria-Hungary which had been part of the German Confederation until 1865. The unification under Prussian leadership manifested Bismarck's "Lesser German" solution of the German question after the Austro-Prussian War of 1866, realised with the support of his national liberal allies. On the other hand, the German Reich of 1871 comprised extended Prussian territories with large non-German sections of the population, like Posen, West Prussia or Schleswig.

It is important to note that before and during the events of World War I, the German state was called an "empire" in English and Wilhelm II was titled "His Imperial and Royal Majesty The German Emperor." After the War and the abolition of the monarchy during the German Revolution of 1918–19, however, when Wilhelm was forced to abdicate, the official English name for Germany was the "German Reich": Reich was left untranslated and no longer referred to an "empire" but, instead, took on the connotation of "Realm" or "State". "German Reich" was used in legal documents and English-language international treaties — for example, the Kellogg–Briand Pact[6] and the Geneva Conventions.[7] If the term "Empire" had still been considered valid at this point, it would have been used on these documents instead of "Reich".

Apart from official documents, post-World War I Germany was referred to as the "German Reich" — never as the "German Empire" — for example, by British politicians[8]—and the word "Reich" was used untranslated by Allied prosecutors throughout the Nuremberg Trials, with "German Empire" only used to signify pre-1918 Germany.

That Reich was never translated to "Empire" after 1918 has to do with the lack of a precise equivalent in English. In German, Reich does not presuppose a monarchical form of government; but in English, the word "Empire" almost certainly does, even though the Latin word imperium, from which "empire" is derived, need not denote a monarchy. Old English had the word rīc which was cognate with Reich, but this word has long since fallen out of use, except perhaps in the compound "bishopric".

On 8 May 1945, with the capitulation of the German armed forces, the supreme command of the Wehrmacht was handed over to the Allied Powers. The Allies refused to recognise Karl Dönitz as Reichspräsident or to recognise the legitimacy of his Flensburg government (so-called because it was based at Flensburg and controlled only a small area around the town) and, on 5 June 1945, the four powers signed the Berlin Declaration, creating the Allied Control Council, and assumed de jure supreme authority with respect to Germany.[9]

While the Allied-occupied Germany was divided into a British, French, American and a Soviet occupation zone, the former eastern territories of the German Reich east of the Oder-Neisse line were de facto annexed by the Republic of Poland and the Soviet Union. Nevertheless, the Allied forces did not abolish the Weimar Constitution nor did they declare the German Reich dissolved.[citation needed]

In its 1973 review of the previous year's Basic Treaty between East and West Germany, the German Federal Constitutional Court (Bundesverfassungsgericht) ruled that according to its Basic Law the Federal Republic of Germany (FRG) is identical with the German Reich and not merely its legal successor.[10] The court also explained that the FRG had only partial identity in questions concerning the state territory because the German Democratic Republic and the Polish- and USSR-occupied eastern territories were beyond FRG authority and because the Allied powers still had jurisdiction where Germany as a whole was concerned. It therefore stated the continuity of the German state established in 1871 according to constitutional law and its identity as a subject of international law.

The view, however, was contested by most other countries of the world. The three Western allies, the Soviet Union and most other Western countries regarded the German Reich as still being one nation — not synonymous with either the West or East German state but rather the two states in collective. Other countries tended to regard the German Reich to have been divided into two states. As of 1974, East Germany's official stance was that the GDR was a new state that is German in nature, a successor of the German Empire,[11] and that there were then two German states that were different nations. The Basic Law for the Federal Republic of Germany was made with agreement of at least the Western allied forces.[citation needed] It is also worth noting that the FRG was held responsible for reparations after the war, while the GDR denied any legal responsibility for the German Reich.[citation needed]

When the Treaty on the Final Settlement with Respect to Germany between Germany and the wartime Allies was signed on 12 September 1990, there was no mention of the term Deutsches Reich, however the Allies paraphrased the international legal personality of Germany as "Germany as a whole" in the English version of the text. Instead the states of the Federal Republic of Germany (West Germany, FRG) and the German Democratic Republic (East Germany, GDR) agreed to be bound by certain conditions which they had to ratify, one of which was the creation of a united Germany — which to come into existence was also required to agree to certain treaty conditions. On meeting these conditions under Article 7.2 "The United Germany [has] accordingly full sovereignty over its internal and external affairs."[12]