The German War Graves Commission (Volksbund Deutsche Kriegsgräberfürsorge in German) is responsible for the maintenance and upkeep of German war graves in Europe and North Africa.[2] Its objectives are: acquisition, maintenance and care of German war graves; tending to next of kin; youth and educational work; and preservation of the memory to the sacrifices of war and despotism.

It was founded as a private charity on December 16, 1919 as the recognised [German] Commission under the war graves provisions of Article 225 of the Treaty of Versailles.[2]

By the 1930s, the Commission had established numerous cemeteries for German World War I dead.[2] During World War II, the Volksbund's work was mostly carried out by the Wehrmacht's own graves service.[2]

The Commission spent about 41 million Euro (in 2013). Two-thirds of this sum was financed by members and private donations. One third was paid by government (war graves outside of Germany) and states (maintenance of some war graves within Germany).[1]

The commission looks after "832 military cemeteries in 45 countries with about 2.6 million dead" and its work is carried out today by 8,000 honorary and 571 full-time employees.[1] Since the end of the Cold War, the Volksbund has access to Eastern Europe, where most World War II German casualties occurred.[2] Since 1991, 188 World War I cemeteries and 330 World War II cemeteries in eastern, central and south-eastern Europe have been reconstructed or rebuilt and about 759,110 bodies have been buried in new graves.[2] Maintenance of German war cemeteries in France is looked after by the Service d'Entretien des Sépultures Militaires Allemandes (the "German Military Burials Maintenance Service") known as S.E.S.M.A..[4]

The German War Graves Commission offers an accessible online database of 4.6 million individual names for World Wars I and II.[10][1]

War cemeteries and war dead of World War I and II inside of Germany are also documented in these files (895,561 in 2010). Among these are war dead transferred to Germany or persons who died within Germany. But only those are registered whose remains were transferred to war cemetery areas within civil cemeteries but not to individual family graves.

Further in this database persons can be found who died by aerial bombing of cities, as prisoner of war or in imprisonment, partly foreign members of German auxiliary troops who died in World War II or even some members of Wehrmacht who died before World War II began.

A grave research demand (Grabnachforschungsauftrag in German) can be sent online or as hardcopy to Volksbund (German War Grave Commission) to clarify the unknown fate of a German soldier. As some family names are very common it is important to mention all given names and the date of birth of the missing soldier. As additional data should be given if available: date of death, last unit (Truppenteil in German) and last letters. Often withdrawing troops could not bury their casualties. Detailed data on the war dead of World War I were destroyed in Berlin during World War II,[8] by aerial bombing in February 1945, when the files of the bureau Zentralnachweiseamt für Kriegerverluste und Kriegsgräber (ZNA) were lost.[11]

Volksbund has also an online database on war cemeteries. Data collected for each cemetery are location (geography), how to reach, number of dead, course of military events in the region and architecture of the cemetery.[12] The search for war cemeteries can also be done in geographical order (country, cemetery).[13]

German War Graves Commission has an online inventory of its cemeteries.[14][15] Some of these cemeteries are described below: 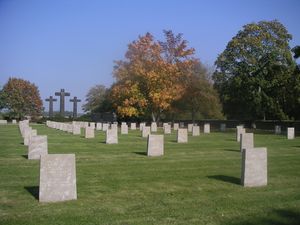 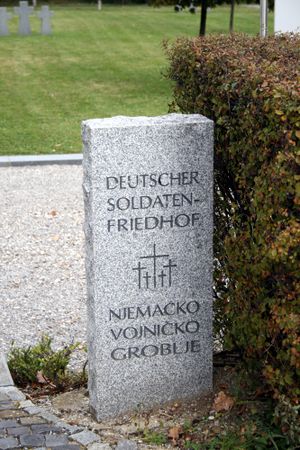 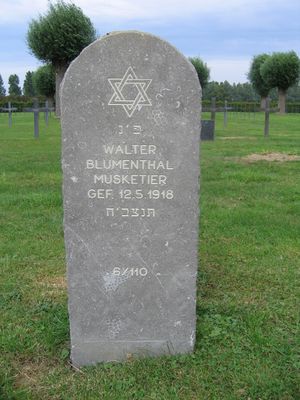