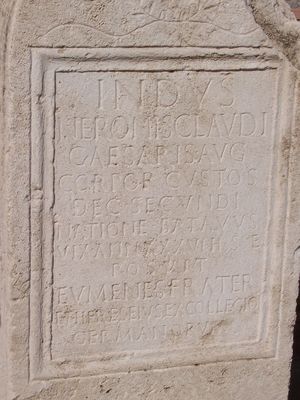 Gravestone of Indus, a member of the German Bodyguard[1]

The Roman Imperial German Bodyguard, also called the Germanic bodyguard, (Latin: Germani corporis custodes[2] or Germani corpore custodes,[3] in the literary sources also called the numerus Batavorum[4] or cohors Germanorum[5]) was a personal, imperial guards unit for the Roman emperors of the Julio-Claudian dynasty (30 BC – AD 68) composed of Germanic soldiers. Although the Praetorians may be considered the Roman Emperor's main bodyguard, the German Bodyguards were a unit of more personal guards recruited from distant parts of the Empire, so they had no political or personal connections with Rome or the provinces.[6]

From De Bello Gallico, it is known that Julius Caesar also had a Germanic bodyguard.[7][8]

The members of the German Bodyguard were recruited from the Germanic tribes resident in, or on the borders of, the Roman province of Germania Inferior, with most recruits drawn from the Batavi[9] but also from neighbouring tribes of the Rhine delta region, including the Frisii,[10] Baetasii[11] and Ubii.[12][13] Little is known about their organisation; the 500 bodyguards were formed up in five centuries, each century commanded by a centurion. From inscriptions it is known that there existed, as in all Roman cavalry units, the officer rank of decurion. The exact size of the unit, which was at least partially mounted, is also unknown, but is described in ancient sources as a cohort, which in this period normally implied a strength of c. 500 men, or less precisely as a numerus, whose size could vary. Under the Emperor Caligula, the Bodyguard may have consisted of 500 to 1,000 men.[citation needed]

The German Bodyguard was valued as loyal and reliable.[14] Emperors like Nero trusted the Germani especially because they were not of Roman origin.[15]

The Bodyguard was disbanded briefly after the Battle of the Teutoburg Forest,[citation needed] and was finally dissolved by Galba in 68[5] because of its loyalty to Nero (ruled 54-68), whom he had overthrown. The decision caused deep offence to the Batavi, and contributed to the outbreak of the Revolt of the Batavi in the following year.[16] Their indirect successors were the Equites singulares Augusti which were, likewise, mainly recruited from the Germani.[citation needed] They were apparently so similar to the Julio-Claudians' earlier German Bodyguard that they were given the same nickname, the "Batavi".[17]

The Roman client king of Judea Herod the Great had a German personal bodyguard modeled upon that of Augustus.[18]