German declaration of war against the United States (1941) 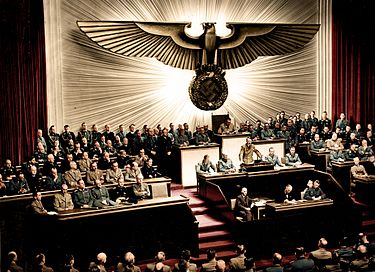 The course of relations between Germany and the United States had deteriorated since the beginning of World War II, inevitably so given the increasing cooperation between the United States and the United Kingdom. The Destroyers for Bases Agreement, Lend-Lease, the Atlantic Charter, the hand-over of military control of Iceland from the United Kingdom to the United States, the extension of the Pan-American Security Zone, and many other results of the special relationship which had developed between the two countries had put a strain on relations between the US, still technically a neutral country, and Nazi Germany. US destroyers escorting American supply vessels bound for the UK were already engaged in a de facto war with German U-Boats.[1] Roosevelt's desire to help the UK, despite the objections of the influential US isolationist lobby, and legal impediments imposed by Congress which prevented direct involvement in the war, brought the US to push hard against the traditional boundaries of neutrality.

On December 7, 1941, the Empire of Japan launched an attack on the US naval and army base on Pearl Harbor in Hawaii, beginning a war between Japan and the United States. Japan had not informed its ally, Germany, in advance of the attack, although the Japanese ambassador had informed the German Foreign Minister, Joachim von Ribbentrop, at the beginning of December that relations between the US and the Japanese Empire were at a breaking point, and that war was imminent. He was instructed to ask Germany for commitment to declare war under the terms of the Tripartite Pact should that occur. Hitler and Ribbentrop had been urging Japan to attack and take over Singapore from the British, on the theory that doing so would not only hurt the UK, but would also serve to help keep the US out of the war.[2]

According to the terms of their agreements, Germany was obliged to come to the aid of Japan if a third country attacked Japan, but not if Japan attacked a third country. Ribbentrop reminded Hitler of this, and pointed out that to declare war against the US would add to the number of enemies Germany was fighting against, but Hitler dismissed this concern as not being important,[2] and, almost entirely without consultation, chose to declare war against the US, wanting to do so before, he thought, Roosevelt would declare war on Germany.[3][4][5]

In fact, Hitler's declaration of war came as a great relief to British Prime Minister Winston Churchill, who feared the possibility of two parallel disconnected wars – the UK and Soviet Union versus Germany in Europe, and the US versus Japan in the Pacific. With Nazi Germany's declaration against the United States in effect, American assistance for Britain in both theaters of war as a full ally was assured. It also simplified matters for the American government, as John Kenneth Galbraith recalled:

When Pearl Harbor happened, we [Roosevelt's advisors] were desperate. ... We were all in agony. The mood of the American people was obvious – they were determined that the Japanese had to be punished. We could have been forced to concentrate all our efforts on the Pacific, unable from then on to give more than purely peripheral help to Britain. It was truly astounding when Hitler declared war on us three days later. I cannot tell you our feelings of triumph. It was a totally irrational thing for him to do, and I think it saved Europe."[6]

Hitler's reasons for declaring war against the US when he was not obligated to were numerous. One was an emotional response: the Japanese tactic of using a surprise attack without making a declaration of war appealed to him – he had done the same thing when he attacked the Soviet Union with Operation Barbarossa in June 1941; indeed, he told the Japanese ambassador "[O]ne should strike – as hard as possible – and not waste time declaring war."[2] Also, the prospect of a world-wide war fed Hitler's tendency towards grandiose thinking, and reinforced his feeling that he was a world-historical figure of destiny. As he said in his declaration speech to the Reichstag:

I can only be grateful to Providence that it entrusted me with the leadership in this historic struggle which, for the next five hundred or a thousand years, will be described as decisive, not only for the history of Germany, but for the whole of Europe and indeed the whole world.[2]

Hitler's lack of knowledge about the US and its industrial and demographic capacity for mounting a war on two fronts also entered into his decision.[2] As early as mid-March 1941 – nine months before the Japanese attack – President Roosevelt was acutely aware of Hitler's hostility towards the United States, and the destructive potential it presented. Due to this attitude within the White House, and the rapidly progressing efforts of the Americans' industrial capacity before and through 1941 to start providing its armed forces with the ordnance, combat aircraft and ships that would be required to defeat the Axis as a whole, the US was already well on its way towards the full-scale wartime economy which would make it the "arsenal of democracy" for itself and its allies.

Finally, Hitler's deeply-held racial prejudices made him see the US as a decadent bourgeois democracy filled with people of mixed race, a population heavily under the influence of Jews and Negroes, with no history of authoritarian discipline to control and direct them, interested only in luxury and living the "good life" while dancing, drinking and enjoying negrofied music. Such a country, in Hitler's mind, could never be a serious threat to a disciplined country like National Socialist Germany[2] — and thus set the stage for a dangerously inaccurate view of the very nation that Hitler had stated in his unpublished Zweites Buch (Second Book, 1928) would be the Third Reich's most serious challenge beyond his intended defeat of the Soviet Union.[7]

The one advantage of the declaration of war against the US provided for Hitler was as a propaganda diversion for the German public, to distract them from the state of the war against the Soviet Union, in which Germany had suffered severe setbacks and an unexpectedly prolonged engagement. Hitler had assured every one that the Soviet Union would be crushed well before the onset of winter, but that, in fact, did not happen, and there was little in the way of good news to report to the people. The timing of the Japanese attack on Pearl Harbor enabled Hitler to angle his planned speech to the Reichstag in a more positive fashion, squeezing as much propaganda value out of it as possible. Hitler, in fact, put off the speech – and the declaration of war – for several days, trying to arrive at the proper psychological moment to make the announcement.[8] Still, the propaganda motive was hardly sufficient to justify declaring war on the US, especially considering that doing so would create an otherwise "unnatural alliance" between two disparate and heretofore antagonistic polities, the United States and the Soviet Union. Joachim C. Fest, one of Hitler's biographers, has argued that Hitler's decision was "really no longer an act of his own volition, but a gesture governed by a sudden awareness of his own impotence. That gesture was Hitler's last strategic initiative of any importance."[4]

Regardless of Hitler's reasons for the declaration, the decision is generally seen as an enormous strategic blunder on his part, as it allowed the United States to enter the European war in support of the United Kingdom and the Allies without much public opposition, while still facing the Japanese threat in the Pacific. Hitler had, in fact, committed Germany to fight the US while in the midst of a war of extermination against Russia, and without having first defeated the UK, instead of taking the option of putting off a conflict with the US for as long as possible, forcing it to concentrate on the war in the Pacific against Japan, and making it much more difficult for it to become involved in the European war. At least to some extent he had held in his hands the power to control the timing of the intervention of the US, and instead, by declaring war against America, he freed Roosevelt and Churchill to act as they saw fit.[1][4][5][9][10][11] 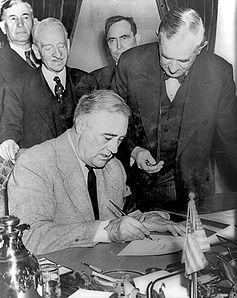 Franklin Delano Roosevelt's signing of the declaration of war against Germany, the response of the United States to Hitler's declaration

Text of the German declaration

The Government of the United States having violated in the most flagrant manner and in ever increasing measure all rules of neutrality in favor of the adversaries of Germany and having continually been guilty of the most severe provocations toward Germany ever since the outbreak of the European war, provoked by the British declaration of war against Germany on September 3, 1939, has finally resorted to open military acts of aggression.

On September 11, 1941, the President of the United States publicly declared that he had ordered the American Navy and Air Force to shoot on sight at any German war vessel. In his speech of October 27, 1941, he once more expressly affirmed that this order was in force. Acting under this order, vessels of the American Navy, since early September 1941, have systematically attacked German naval forces. Thus, American destroyers, as for instance the Greer, the Kearney and the Reuben James, have opened fire on German submarines according to plan. The Secretary of the American Navy, Mr. Knox, himself confirmed that-American destroyers attacked German submarines.

Furthermore, the naval forces of the United States, under order of their Government and contrary to international law have treated and seized German merchant vessels on the high seas as enemy ships.

Accept, Mr. Charge d'Affaires, the expression of my high consideration.