German federal elections took place on 16 October 1994, to elect members to the 13th Bundestag (parliament) of the Federal Republic of Germany.

The SPD let its members elect a candidate for Chancellor against Helmut Kohl. Rudolf Scharping, Minister-President of Rhineland-Palatinate, beat Gerhard Schröder and Heidemarie Wieczorek-Zeul in the SPD's internal election. Tension between Scharping and other SPD leaders such as Oskar Lafontaine and Gerhard Schröder hampered his campaign.

For the first time the Green party seemed to be willing to actually join a government in the event that a SPD – Green coalition had the majority.

^† — totals for the Greens reflect the merger of the Western and Eastern Green parties. 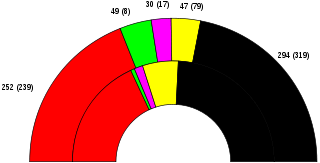 The coalition between the CDU/CSU and the FDP was able to continue in power with Helmut Kohl as chancellor.

The PDS was able to gain four direct seats and was therefore eligible for full caucus status and proportional representation even though it remained below the 5% margin.