German military brothels were set up by the Third Reich during World War II throughout much of occupied Europe for the use of Wehrmacht and SS soldiers.[1] These brothels were generally new creations but in the West they were sometimes set up using existing brothels as well as many other buildings. Until 1942, there were around 500 military brothels of this kind in Nazi occupied Europe.[2] Often operating in confiscated hotels and guarded by the Wehrmacht, these facilities used to serve travelling soldiers and those withdrawn from the front.[3][4] Along with those in concentration camp brothels, according to records, at least 34,140 European women were forced to serve as prostitutes during the German occupation of their countries.[1] In many cases in Eastern Europe, the women involved were kidnapped on the streets of occupied cities during German military and police round ups called łapanka or rafle.[3][4]

The Foreign Ministry of the Polish Government in Exile issued a document on May 3, 1941, describing the mass kidnapping raids conducted in Polish cities with the aim of capturing young women for sexual slavery at brothels run by the German military.[5] At the same time, Polish girls as young as 15, classified as suitable for slave labor and shipped to Germany, were sexually exploited by German men at their place of destination.[5] In Brandenburg, two Polish teens who returned home to Kraków in advanced stage of pregnancy, reported to have been raped by German soldiers with such frequency that they were unable to perform any of the worker's designated labour.[5] 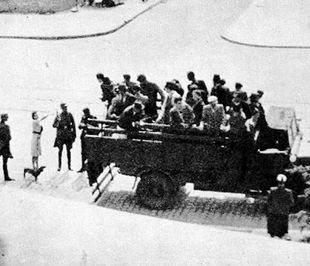 The Swiss Red Cross mission driver Franz Mawick wrote in 1942 from Warsaw about what he saw: "Uniformed Germans [...] gaze fixedly at women and girls between the ages of 15 and 25. One of the soldiers pulls out a pocket flashlight and shines it on one of the women, straight into her eyes. The two women turn their pale faces to us, expressing weariness and resignation. The first one is about 30 years old. "What is this old whore looking for around here?" – one of the three soldiers laughs. "Bread, sir" – asks the woman. [...] "A kick in the ass you get, not bread" – answers the soldier. Owner of the flashlight directs the light again on the faces and bodies of girls. [...] The youngest is maybe 15 years old [...] They open her coat and start groping her with their lustfull paws. "This one is ideal for bed" – he says.".[5]

In the Soviet Union women were kidnapped by German forces for prostitution as well; one report by International Military Tribunal writes "in the city of Smolensk the German Command opened a brothel for officers in one of the hotels into which hundreds of women and girls were driven; they were mercilessly dragged down the street by their arms and hair[6]

According to exposé by the Polish Wprost magazine,[5] the women forced into sexual slavery by the Nazi German authorities sometimes tried to escape; in one such instance, a group of Polish and Russian women imprisoned at a German military brothel located in Norway escaped in 1941. They found refuge in the local Lutheran Church which offered them asylum.[5] The women were forced to service up to 32 men per day; the visiting soldiers were allocated 15 minutes each at a nominal cost of 3 Reichsmarks per session between the hours of 2 p.m. till 8.30 p.m.[5] The women who were visibly pregnant were sometimes released, but would not go back to their families, so as not to shame them.[5]

A 1977 German report by a neoconservative historian from Baden-Württemberg,[7] Franz W. Seidler, contended that the foreign women who were made to register for the German military brothels had been prostitutes already before the war.[8][9] Ruth Seifert, professor of sociology at the University of Applied Sciences in Regensburg; on the other hand, maintained that women were ostensibly forced to work in these brothels by their German captors, as shown during the Trial of the Major War Criminals before the International Military Tribunal in Nuremberg in 1946, further confirmed by the 1961 book published by Raul Hilberg.[10]

The Wehrmacht was able to establish a thoroughly bureaucratic system of around 100 new brothels already before 1942, based on an existing system of government-controlled ones – wrote Inse Meinen.[11] The soldiers were given official visitation cards issued by Oberkommando des Heeres and were prohibited from engaging in sexual contact with other French women. In September 1941, General von Brauchitsch suggested that weekly visits for all younger soldiers be considered mandatory to prevent "sexual excesses" among them. The prostitutes had a scheduled medical check-up to slow-down the spread of venereal diseases.[12]

The order to regulate the soldiers' sex lives was issued on 29 July 1940[citation needed]. From that point on, free prostitution was forbidden and persecuted by the police. As before, the prostitutes were paid a nominal fee. The soldiers had to bring up the money themselves from their regular guerdon (recompense).[citation needed]