The German nobility (German: deutscher Adel) was a class of persons who, until 1919, enjoyed certain privileges relative to other people under the laws and customs of various parts of what is now Germany. Governments which recognised or conferred nobility included the Holy Roman Empire (962–1806), the German Confederation (1814–1866) and the German Empire (1871–1918). All legal privileges of the nobility were officially abolished in 1919 by the Weimar Republic (1919–1933), and nobility is no longer conferred or recognised by the Federal Republic of Germany, former hereditary titles being allowed only as part of the surname. The system of nobility in the former German Empire was similar to the nobility of Austria, as both territories long belonged to the Holy Roman Empire, although Austria, unlike Germany, legally abolished its nobility and banned use of hereditary titles in any form.

In Germany, nobility and titles pertaining to it were recognised or bestowed upon individuals by emperors, kings and rulers of lesser rank, and were then inherited by the legitimate, male-line descendants of the ennobled person. In cases where families had been deemed noble as far back as historical records could document (i.e. the Uradel), their nobility (generally pre-dating AD 1400) was usually eventually recognised by a sovereign, confirming their entitlement to whatever legal privileges nobles enjoyed in that sovereign's realm. Noble rank was usually granted to men by letters patent, whereas women were members of the nobility by descent or (sometimes) by marriage to a nobleman. Nobility was inherited equally by all legitimate descendants in the male line.

Most German titles of nobility were also inherited by all male-line descendants, although some descended by male primogeniture, especially in 19th and 20th century Prussia (e.g. Otto von Bismarck, although born a baronial Junker (not a title) and elevated twice, first to the hereditary title of count (Graf), and then to the — in this case only personal — title of prince (Fürst) in 1871, his children and future cadets of his family were counts). Upon promulgation of the Weimar Constitution on 11 August 1919, all Germans were declared equal before the law.[1] On 18 March 1919 the Landtag of the Free State of Bavaria enacted the Gesetz über die Aufhebung des Adels ("Act on the Abolition of the Nobility), which eliminated (not nobility as a class or individual attribute per se, but) all noble privileges, and henceforth forbade Bavarians from accepting foreign ennoblement. Other German states enacted equivalent legislation.

The Bavarian constitution (of 1998) also bans the transfer, by way of adoption, of surnames containing formally noble attributes (§ 118, section 3). This caused[clarification needed] an exceptional practice regarding surnames borne by former members of the nobility: whereas the gender differentiation in German surnames, widespread until the 18th century – colloquially retained in some German dialects – was abolished in Germany with the introduction of officially registered invariable surnames by the late 19th century, former noble titles transformed into parts of the surname in 1919 continue to appear in female and male forms.[2]

Altogether abolished were titles borne exclusively by German monarchs, such as emperor/empress, king/queen, grand duke/grand duchess, etc. However former titles shared and inherited by all members of the family were retained but incorporated into the surname. Members of, for instance, the former royal families of Prussia and Bavaria were allowed use of Prinz/Prinzessin;[3] or Herzog/Herzogin in the cases of the former kings/queens of Saxony and Württemberg, the ducal title borne by non-ruling cadets of their dynasties before 1919; or Herzog/Herzogin for the six deposed grand dukes and their wives: These were the former rulers of Baden, Hesse, Mecklenburg-Schwerin, Mecklenburg-Strelitz, Oldenburg, and Saxe-Weimar-Eisenach.

Any dynast who did not reign prior to 1918 but had held a specific title as heir to one of Germany's former thrones (e.g. Erbprinz (Crown Prince), along with any heir to a primogeniture title of nobility, and their wives, were permitted to incorporate those titles into elements of the personal surname. However, these titles became extinct upon their deaths, not being heritable.[4] With the demise of all persons styled "crown prince" before 1918, the term Kronprinz no longer exists as a legal surname element. Traditional titles exclusively used for unmarried noblewomen, such as Baronesse, Freiin and Freifräulein, were also transformed into parts of the legal surname, subject to change at marriage or upon request.[5]

All other former titles and nobiliary particles are now inherited as part of the surname, and remain protected as private names under the laws. Whereas the title previously prefixed the given and surname (e.g. Graf {"Count"} Kasimir von der Recke), the legal usage moves the former title to the surname (i.e. Kasimir Graf von der Recke). However, the pre-1919 style sometimes continues in colloquial usage. In Austria, by contrast, not only were the privileges of the nobility abolished, but their titles and nobiliary particles as well.[6] 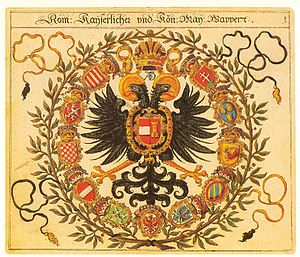 Some states within the Holy Roman Empire had strict laws concerning proper conduct, employment, or marriage of individual nobles. Failure to comply with these laws could result in temporary or permanent Adelsverlust ("loss of the status of nobility"). Until about the early 19th century, for example, it was commonly forbidden for nobles, theoretically on pain of Adelsverlust, to marry persons "of low birth", i.e. commoners. Moreover, nobles employed in menial labour could, theoretically, lose their noble rank, as could nobles convicted of capital crimes. Adelsverlust only concerned the individual who was in violation of noble laws of conduct, meaning that their kin, spouse and living children were generally not affected.

Various organisations perpetuate the historical legacy of the former nobility, documenting genealogy, chronicling the history of noble families and sometimes declining to acknowledge persons who acquired noble surnames in ways impossible before 1919.

Most, but not all, surnames of the German nobility were preceded by or contained the preposition von (meaning "of") or zu (meaning "at") as a nobiliary particle.[7] The two were occasionally combined into von und zu (meaning "of and at").[7] In general, the von form indicates the family's place of origin, while the zu form indicates the family's continued possession of the estate from which the surname is drawn: Therefore, von und zu indicates a family which is both named for and continues to own their original feudal holding or residence. However, the zu particle can also hint to the split of a dynasty, as providing information on the adopted new home of one split-off branch: For instance, a senior branch owning and maybe even still residing at the place of the dynasty's origing might have been called of A-Town [{and at} A-Town] furthermore, while a new, junior branch could then have adopted the style of, say, of A-town [and] at B-ville, sometimes even dropping [and] at, simply hyphenating the names of the two places. Other forms also exist as combinations with the definite article: e.g. "von der" or von dem → "vom" ("of the"), zu der → "zur" or zu dem → "zum" ("of the", "in the", "at the").[8] Although the "von" did often denote place names, this principle was eventually superseded by "von" simply becoming a denotation of nobility. Particularly between the late 18th and early 20th century when an increasing number of unlanded commoners were ennobled, the "von" was typically simply put in front of a person's surname. When a person by the common occupational surname of "Meyer" received nobility, they would thus simply become "von Meyer".

When sorting noble – as well as non-noble – names in alphabetic sequence, any prepositions or (former) title are ignored.[9] Also name elements which have developed from honorary functions, such as Schenk (short for Mundschenk, i.e. cup-bearer), are overlooked.[10] Nobiliary particles are not capitalised unless they begin a sentence, and then they are usually skipped,[11] unless this creates confusion. In this, the German language practice differs from Dutch in the Netherlands, where the particle van is usually capitalised when mentioned without preceding given names or initials, or from Dutch in Belgium, where the name particle Van is always capitalised.

A family whose nobility dates back to at least the 14th century may be called Uradel, or Alter Adel ('ancient nobility',[12] or 'old nobility'). 'This contrasts with Briefadel ('patent nobility'): Nobility granted by letters patent. The first known such document is from September 30, 1360, for Wyker Frosch in Mainz.[13]

Hochadel (upper nobility) were those noble houses which ruled sovereign states within the Holy Roman Empire and, later, in the German Confederation or the German Empire. They were royalty; the heads of these families were entitled to be addressed by some form of “Majesty” or “Highness”. These were the families of kings (Bavaria, Hanover, Prussia, Saxony, and Württemberg), grand dukes (Baden, Hesse-Cassel, Hesse and by Rhine, Luxembourg, Mecklenburg-Schwerin, Mecklenburg-Strelitz, Oldenburg and Saxe-Weimar), reigning dukes (Anhalt, Brunswick, (Schleswig-)Holstein, Nassau, Saxe-Altenburg, Saxe-Coburg-and-Gotha, Saxe-Meiningen), and reigning princes (Hohenzollern-Hechingen, Hohenzollern-Sigmaringen, Liechtenstein, Lippe, Reuss, Schaumburg-Lippe, Schwarzburg, and Waldeck-and-Pyrmont).

The Hochadel also included the Empire's formerly quasi-sovereign families whose domains had been mediatised within the German Confederation by 1815, yet preserved the legal right to continue royal intermarriage with still-reigning dynasties (Ebenbürtigkeit). These quasi-sovereign families comprised mostly comital and princely families, but they included a few dukes also of Belgian/Dutch origin (Arenberg, Croÿ, Looz-Corswarem). Information on these families constituted the second section of Justus Perthes’ entries on reigning, princely, and ducal families in the Almanach de Gotha.

During the unification of Germany in 1866-1871, the states of Hanover, Hesse-Kassel, Hohenzollern-Hechingen, Hohenzollern-Sigmaringen, (Schleswig-)Holstein, and Nassau were absorbed into Prussia. The former ruling houses of these states were still considered Hochadel under laws adopted by the German Empire.

In addition, the ruling families of Hohenzollern-Hechingen and Hohenzollern-Sigmaringen were accorded the dynastic rights of a cadet branch of the Royal House of Prussia after yielding sovereignty to their royal kinsmen. The exiled heirs to Hanover and Nassau regained sovereignty by being allowed to inherit, eventually, the crowns of Brunswick (1914) and Luxembourg (1890).

Nobility that held legal privileges until 1918 greater than those enjoyed by commoners, but less than those enjoyed by the Hochadel were considered part of the lower nobility or Niederer Adel. Most were untitled, only making use of the particle von in their surnames. Higher ranking noble families of the Niederer Adel bore such hereditary titles as Ritter, Freiherr (or Baron) and Graf. Although most German counts belonged officially to the lower nobility, those who were mediatised belonged to the Hochadel, the heads of their families being entitled to be addressed as Erlaucht ("Illustrious Highness"), rather than simply as Hochgeboren ("High-born"). There were also some German noble families, especially in Austria, Prussia and Bavaria, whose head bore the titles of Fürst (Prince) or Herzog (Duke), however never having exercised a degree of sovereignty, they were accounted members of the lower nobility (e.g., Bismarck, Blücher, Pless, Wrede).

The titles of Elector, Grand Duke, Archduke, Duke, Landgrave, Margrave, Count Palatine, Prince and Reichsgraf were borne by rulers who belonged to Germany's Hochadel. Other counts, as well as barons (Freiherren), lords (Herren), knights (Ritter)[14] were borne by noble non-reigning families. The vast majority of the German nobility, however, inherited no titles, and were usually distinguishable only by the nobiliary particle von in their surnames.

^1 The prefix Reichs- indicates a title granted by a past Holy Roman Emperor; these titles conferred higher precedence than that associated with other titles of the same nominal rank.
^2 Freiin indicates an unmarried daughter of a baron.

The heirs to sovereigns or to headship of mediatised families prefixed their title by Erb-, meaning Hereditary. For instance, the heir to a Grand Duke is titled Erbgroßherzog or simply Erbprinz, meaning Hereditary Grand Duke or Hereditary Prince. A sovereign duke's heir was also titled Erbprinz, and a prince's (Fürst) heir might be titled Erbprinz or Erbgraf ("Hereditary Prince", "Hereditary Count"). The prefix distinguished the heir from similarly titled junior siblings. The heirs of emperors and kings were titled Kronprinz ("crown prince"), while the heirs of prince-electors were titled Kurprinz ("electoral prince").