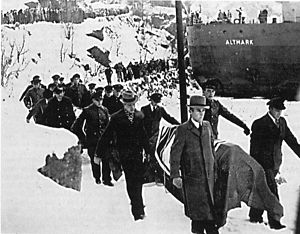 German dead are brought ashore for burial after the incident.

Altmark was a German oil tanker and supply vessel, one of five of a class built between 1937 and 1939. She is best known for her support of the German commerce raider, the "pocket battleship" Admiral Graf Spee and her subsequent involvement in the "Altmark Incident".

Altmark (Captain Heinrich Dau) was assigned to support Admiral Graf Spee during her raid in the South Atlantic between September and December 1939. Seamen rescued from the ships sunk by Admiral Graf Spee were transferred to Altmark. After Admiral Graf Spee was scuttled by her crew in the Río de la Plata in December 1939, Altmark attempted to return to Germany, steaming around the north of Great Britain and then within the Norwegian littoral. On 14 February 1940 Altmark, proceeding south within Norwegian territorial waters, was discovered by three British Lockheed Hudson Mk.II's, from RAF Thornaby and pursued by several British destroyers led by HMS Cossack. Late on 16 February 1940 in Jøssingfjord she was fired upon while the Norwegian Navy stood by and took no action save for raising a protest flag. The German tanker then received a boarding party from HMS Cossack. During an attempted escape across the ice, seven of the Altmark crew were shot down. During the skirmish Altmark was run onto the rocks. It had been the British intention to tow the ship back to a Scottish port, but the damage to the tanker's stern frustrated this idea.

An attack by one belligerent upon its enemy in neutral waters is a breach of neutrality, in this case a breach of Norwegian neutrality by Britain. Because Hitler feared Norway would be insufficiently resolute to protect the German iron-ore traffic that passed legitimately along the Norwegian littoral, at Raeder's urging he decided on the invasion of Norway and Denmark in March 1940.

The British justification for the attack on the Altmark was set out in a Note to the Norwegian Government from Foreign Secretary Lord Halifax dated 10 March 1940. The problem the British Government faced was the wording of The Hague Convention XIII of 1907 to which it was a signatory. Article 10 provides that: "The neutrality of a Power is not affected by the mere passage through its territorial waters of warships or prizes belonging to belligerents."

This meant that the Altmark was within its rights to sail through Norwegian waters with prisoners aboard providing that it did not come to a protracted stop longer than 24 hours. In the diplomatic letter, the British Government confirmed that it was not contrary to the law of neutrality to sail a prison ship through neutral waters, and Britain often did this herself. In fact the British complaint had nothing to do with the prisoners. Altmark was a Fleet tanker assimilated to a warship and was proceeding to Germany from the Atlantic by the north-about route. Instead of sailing down the North Sea as he would do in peacetime, the master of the Altmark had elected to sail the entire leg of the voyage southwards within Norwegian territorial waters in order to attract immunity from attack there under international law. There was no other reason for him to want to voyage through waters so dangerous to navigation. This must be an abuse of international law, and since the Norwegians had declined to stop the voyage the Royal Navy had done so on orders from the British Admiralty.

The question remains unresolved to this day as to whether, as the Hague Conventions stood in 1940, a warship could legitimately seek immunity from attack in neutral waters by widely varying its course to reach them.

The ship, renamed Uckermark on 6 August 1940, then resumed in the role for which she had been built. During Admiral Lütjens' Atlantic adventure with the battleships Scharnhorst and Gneisenau between January and March 1941, Uckermark (Captain Zatorski) was a supply ship and scout attached to the squadron. As the result of her reports the battleships were directed to various merchant vessels, which were then sunk.

On 9 September 1942 she left France for Japan with a cargo of vegetable oil and fuel, supplying the auxiliary cruiser Michel on the way, arriving at Yokohama on 24 November 1942. Uckermark was then intended as the replenishment ship for the German raider Thor, which was raiding merchant shipping in the Indian Ocean and western Pacific Ocean areas.

On 30 November 1942, Uckermark was anchored in Yokohama, Japan, next to Thor and the Australian passenger liner Nankin, which Thor had captured in March five days out from Fremantle, Australia, en route to Colombo, Ceylon. While the crew was at lunch, Uckermark suffered a huge explosion that ripped the vessel apart. Uckermark, Thor, and Nankin were sunk by the explosion. The cause of the explosion was thought to be a spark from tools used by a repair gang working near the cargo tanks. The Uckermark had delivered 5000ts of gasoline to Yokohama. It seems to be logical that the residual fumes and gasoline did explode. Diesel fuel does not explode the way the ship went up. 53 crewmen from Uckermark died in the explosion. The severely damaged ship was beyond repair and was scrapped.

Some of the survivors of the ship were sent to France on the blockade runner Doggerbank and perished when the ship was mistakenly sunk by the German submarine U-43 on 3 March 1943 with all but one of the 365 strong crew lost at sea.[2]