Germanic kingship refers to the customs and practices surrounding kings among the pre-Christianized Germanic tribes of the Migration period (c. AD 300–700) and the kingdoms of the Early Middle Ages (c. AD 700–1000). The title of king (Proto-Germanic:*kuningaz) is in origin that of the leader elected as sacral and military leader from out of a noble family, usually considered of divine ancestry, in the pre-Christianization period.

The Germanic monarchies were originally pre-Christianized, but their contact, during the Völkerwanderung or Migration Period, with the Roman Empire and the Christian Church greatly altered their structure and developed into the feudal monarchy of the High Middle Ages.

The derisive term "barbarian monarchy" is sometimes used in the context of those Germanic rulers who after AD 476 and during the 6th century ruled territories formerly part of the Western Roman Empire, especially the Barbarian kings of Italy. In the same context, Germanic law is also derisively termed leges barbarorum "barbarian law" etc.[1]

The term is notably different from the word for "king" in other Indo-European languages (*rēks "ruler"; Latin rēx, Sanskrit rājan and Irish ríg, but see Gothic reiks and, e.g., modern German Reich and modern Dutch rijk). It is a derivation from the term *kunjom "kin" (Old English cynn) by the -inga- suffix. The literal meaning is that of a "scion of the [noble] kin", or perhaps "son or descendant of one of noble birth" (OED).

There were other terms for the Germanic king in early Germanic languages, derived from the word for "the people, the nation" rather than "kin". These are Old Norse fylkir (from *fulka) and Gothic þiudans (from *þeuda).

Comparable terms did not necessarily refer to a king but to any member of the nobility, e.g. Old English dryhten (from *druhtiz "army, folk, people"), þēoden (from *þeuda) and æðeling (from *aþel "noble family").

In Germanic poetry, kennings in use for "king" or "lord" include Old English beah-gifa "giver of rings" (Beowulf).

Earl/jarl was a title for a chieftain or leader of a small force of men below the level of kingship. The English lord (hlāford) is another kenning for a chieftain, without parallels in other Germanic languages. Old Norse hofðing (Modern German Häuptling) was a term for "chieftain", literally "head man". The Latinate captain introduced in the late medieval period has the same meaning.

The office was received hereditarily, but a new king required the consent of the people before assuming the throne. All sons of the king had the right to claim the throne, which often led to co-rulership (diarchy) where two brothers were elected kings at the same time. This evolved into the territories being considered the hereditary property of the kings, patrimonies, a system which fueled feudal wars, because the kings could claim ownership of lands beyond their de facto rule.

As a sort of pre-Christianization high priest, the king often claimed descent from some deity. In the Scandinavian nations, he administered pagan sacrifices (blóts) at important cult sites, such as the Temple at Uppsala. Refusal to administer the blóts could lead to the king losing power (see Haakon the Good and Anund Gårdske).

According to the testimony of Tacitus (Germania), some early Germanic peoples had an elective monarchy already in the 1st century.

"They choose their kings by birth, their generals for merit. These kings have not unlimited or arbitrary power, and the generals do more by example than by authority."[2]

Germanic pre-Christianization society had three levels, the king, the nobility and the free men. Their respective political influence was negotiated at the thing. According to the testimony of Tacitus,

"About minor matters the chiefs deliberate, about the more important the whole tribe. Yet even when the final decision rests with the people, the affair is always thoroughly discussed by the chiefs. [... At the assembly, w]hen the multitude think proper, they sit down armed. Silence is proclaimed by the priests, who have on these occasions the right of keeping order. Then the king or the chief, according to age, birth, distinction in war, or eloquence, is heard, more because he has influence to persuade than because he has power to command. If his sentiments displease them, they reject them with murmurs; if they are satisfied, they brandish their spears."[3]

Tacitus notes that as each tribe had its own customary law, the political power of the king could vary between nations. Thus, he states that the Gothones were ruled by kings "a little more strictly than the other German tribes, but not as yet inconsistently with freedom" while beyond the Gothones, the Rugii and Lemovii (tribes placed at the far end of Magna Germania, near the Baltic Sea) lived in "servile submission to their kings".[4] 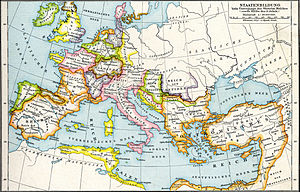 Europe at the fall of the Western Roman Empire in 476, from Allgemeiner Historischer Handatlas by Gustav Droysen, 1886

With the decline of the Roman Empire, many of its provinces came under the rule of Germanic kings: Hispania to the Visigoths, Italia to the Ostrogoths, Gallia to the Franks, Britannia to the Anglo-Saxons, and Africa to the Vandals. These nations had by then been in contact with Rome for a century or more and had adopted many Roman customs. They had also been Christianised and pre-Christianization practice was slowly being replaced.

The Frankish state under the Merovingian dynasty had many of the characteristics of Germanic monarchy under heavy influence from secular and ecclesiastic Rome. Its kings, through their division of the territory, treated it not as a state independent of themselves, but as their patrimony, land won by conquest (theirs and their forefathers'). The king was primarily a war leader and a judge. There are many theories to explain the collapse of Merovingian power, most of which blame the inability of later Merovingians in war as an important factor. The commonly cited occasion of Sigebert III sobbing in his saddle after a defeat (the king was then only ten years old) highlights the importance of victory in battle for a king who is chiefly a warrior.

The principle of election, which determined Germanic succession, was abandoned in those states under the heaviest influence from the papacy, such as Merovingian Gaul, where hereditary succession and the divine right of the reigning dynasty was recognised. In Anglo-Saxon Britain, the principle survived until the Norman Conquest removed it. Anglo-Saxon kings were elected by the witena gemót. Finally, the principle survived in some form or other for centuries after the demise of the last Germanic monarchies. The civil wars of medieval Scandinavia and the electorate of the Holy Roman Empire are part of its legacy.