Giarre (Sicilian: Giarri) is an Italian town and comune on the east coast of Sicily in the province of Catania. In 2010 its population was 27,785.[1]

Some historians suppose that the ancient Greek city of Kallipolis was situated in the same territory of the present-day town of Giarre, but nowadays there is no relevant proof of it.

Since the late 16th century until 1815 Giarre was a village of the county of Mascali.

During the fascist era Giarre was joined to Riposto under the name of Jonia, but separated again in 1945.

Giarre is bounded by the municipalities of Acireale, Mascali, Milo, Riposto, Sant'Alfio, Santa Venerina and Zafferana Etnea. It forms a conurbation with the coastal town of Riposto. 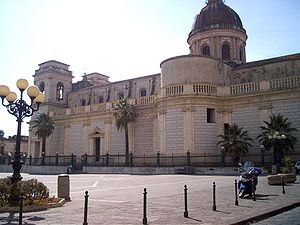 The neo-classical cathedral, begun in 1794, is dedicated to the Spaniard St. Isidore, patron of Madrid.

Giarre has attracted attention for its numerous unfinished buildings and amenities, initiated with public money in the 1990s but never used. A small number have been converted to other uses, including a multi-storey car park; residents also see the prospect of some tourism, as the town has come to be regarded as the centre this style of urban planning.[2]