Established in 2005, the Gibraltar Port Authority's strategy is to build on Gibraltar's unique geographical position and fiscal status and provide a vital link between all stakeholders to ensure a cohesive strategy aimed at achieving common goals in developing and improving the competitiveness and safe operation of the Port of Gibraltar.[1] All operational matters including navigational safety and the smooth running of the Port are overseen by the Captain of the Port. The Port Authority's main functions are:

The Chairman of the board of directors of the Gibraltar Port Authority is the Minister for Tourism, Public Transport and the Port, the Hon. Neil F. Costa, who took office following the Gibraltar general election in December 2011.[2] He succeeded Joseph J. Holliday, the Minister for Enterprise, Development, Technology and Transport as Chairman of the Authority.[3] Commodore Bob Sanguinetti is the Chief Executive of the Gibraltar Port Authority and Captain of the Port. He assumed his position on 19 May 2014. Bob Sanguinetti was formerly an Officer of the Royal Navy and commanded Royal Navy warships before working at the Ministry of Defence in a number of strategic roles. Most recently he was Head of Intelligence at the UK’s National Operations Headquarters in North London. In Gibraltar, he succeeded Captain Roy Stanbrook, who had served from February 2012 to April 2014.[4] Roy Stanbrook replaced Captain Peter Hall who served from 2008 to 2011. 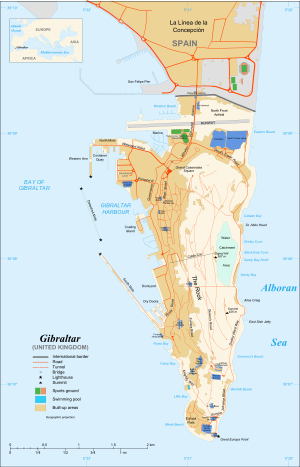 The Port's office is located on the North Mole (pictured top right), at the northern end of Gibraltar Harbour (map shown on the left).

The principal functions of the Authority are to regulate the movement of vessels, co-ordinate Search and Rescue (SAR) operations, ensure all agencies are operating in line with Local and International Maritime Law and the security and safety of all visiting commercial vessels in British Gibraltar Territorial Waters (BGTW).

The principal services provided within Gibraltar Port are bunkering (vessels taking fuel) and cruise liner calls. Other services that are carried out in the Port of Gibraltar (but not limited to) are: the supply & provisions for transiting vessels; crew changes; Gibraltar to Morocco ferry service; ship repairs (see Gibdock) lub-oils delivery; slops/waste discharge; class surveys; underwater cleaning/survey and Ship to Ship transfers.

To ensure the safety of navigation at sea in and around BGTW the Gibraltar Port Authority employs a high specification Vessel Traffic Services (VTS) system. Supported by multiple radars and high-powered cameras, positioned in strategic locations around the Rock of Gibraltar, the VTS centre monitors the surrounding waters with high levels of accuracy on a 24/7 basis.

Bunkering, the supply of fuel to vessels, is the main service that is carried out at the Port. Customarily, the fuel is delivered by bunker barge to a vessel anchored in the Bay of Gibraltar, however, bunkers can also be delivered to vessels alongside a berth where multiple shore fuelling stations are located.

Gibraltar is a popular tourist destination for cruise liner calls due to its location at the entrance to the Mediterranean. The vast majority of all cruise liner calls to Gibraltar come alongside the primary quayside, the North Mole, Western Arm (pictured above), which makes access into town convenient for passengers and crew alike. Gibraltar plays hosts to approximately 270’000 to 300’000 cruise liner passengers annually making Gibraltar a competitive player in this industry.