From Infogalactic: the planetary knowledge core
Jump to: navigation, search
For the 1980s band of the same name, see Adrian Baker.

Gidea Park (/ˈɡɪdⁱə.pɑːrk/) is a small neighbourhood in the London Borough of Havering, United Kingdom. It is a predominantly affluent residential suburb of Romford and was originally known as Romford Garden Suburb.

Gidea Park is situated south of the Gallows Corner junction where the A12, A127 and A118 roads meet. It is approximately 15 miles (24 km) north-east of Charing Cross.

Romford is a large town to the west of Gidea Park; Ardleigh Green is to the east, and Emerson Park and Hornchurch are to the south.

The new Romford Garden Suburb was constructed in 1910–11 on the Gidea Hall and Balgores estates as an exhibition of town planning. Small cottages and houses were designed by more than 100 architects, many of them of considerable reputation. A competition was held to select the best town planning scheme for the suburb; the best designs for houses resulted in those sold at a well-above average £500 and cottages at £375. The project, including a new railway station on the Great Eastern Main Line out of London, was promoted by a company founded by three Liberal Members of Parliament who had links with the Hampstead Garden Suburb development: Herbert Raphael, John Tudor Walters (both later knighted) and Charles McCurdy.[1] 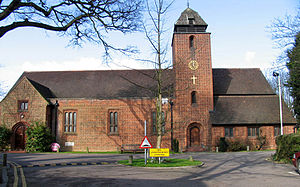 St. Michael and All Angels church in Gidea Park, built in the early 1930s

Known as the exhibition houses, and set in their garden suburb, the houses are fine examples of the domestic architecture of their time. Six of them are now Grade II listed buildings (the initial category of architectural recognition). Further houses, mostly of contemporary flat-roofed design, were built in 1934–35 in Heath Drive, Brook Road, and Eastern Avenue for a Modern Homes Exhibition. One such house (No. 64, Heath Drive) by Berthold Lubetkin's Tecton Group architectural group was the special responsibility of Francis Skinner and is now Grade II listed.[2]

The Royal Liberty School in Upper Brentwood Road was the first school in Britain (and possibly in Europe) to install an electronic computer (an Elliot 903), in 1965.

Romford Hockey Club is based in Gidea Park. It is also the location of Gidea Park Lawn Tennis Club, Romford Golf Club, and two public parks: Lodge Farm Park and Raphael Park. There are also a number of pubs, restaurants and a library.

Gidea Park railway station is on the Great Eastern Main Line, with stopping services running between London Liverpool Street and Shenfield. On Sundays there is also semi-fast services to and from Southend Victoria.[3] From 2018, Gidea Park will be fully served by Crossrail, linking it to additional stations in central London as well as Heathrow Airport and Reading.[4]

Romford railway station is close and is also on the Great Eastern Main Line and sees additional fast and slow services to and from Liverpool Street; it is also the terminus of a branch line to Upminster via Emerson Park.[5]