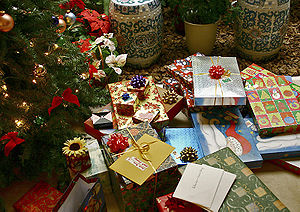 Gifts under a Christmas tree 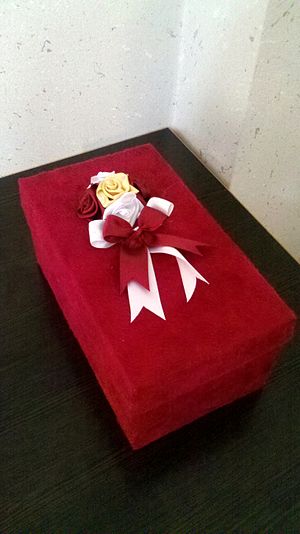 A gift or a present is an item given to someone without the expectation of payment. An item is not a gift, if that item, itself, is already owned by the one to whom it is given. Although gift-giving might involve an expectation of reciprocity, a gift is meant to be free. In many countries, the act of mutually exchanging money, goods, etc. may sustain social relations and contribute to social cohesion. Economists have elaborated the economics of gift-giving into the notion of a gift economy. By extension the term gift can refer to anything that makes the other happier or less sad, especially as a favor, including forgiveness and kindness. Gifts are also first and foremost presented on occasions - birthdays and Christmas being the main examples.

In many cultures gifts are traditionally packaged in some way. For example, in Western cultures, gifts are often wrapped in wrapping paper and accompanied by a gift note which may note the occasion, the recipient's name, and the giver's name. In Chinese culture, red wrapping connotes luck. Although inexpensive gifts are common among colleagues, associates and acquaintances, expensive or intimate gifts are considered more appropriate among close friends, romantic interests or relatives.[1]

Gift giving occasions may be:

At common law, for a gift to have legal effect, it was required that there be (1) intent by the donor to give a gift, and (2) delivery to the recipient of the item to be given as a gift.

In some contexts gift giving can be construed as bribery. This tends to occur in situations where the gift is given with an implicit or explicit agreement between the giver of the gift and its receiver that some type of service will be rendered (often outside of normal legitimate methods) because of the gift. Some groups, such as government workers, may have strict rules concerning gift giving and receiving so as to avoid the appearance of impropriety.[2]

Lewis Hyde remarks in The Gift that Christianity considers the Incarnation and subsequent death of Jesus to be the greatest gift to humankind, and that the Jataka contains a tale of the Buddha in his incarnation as the Wise Hare giving the ultimate alms by offering himself up as a meal for Sakka. (Hyde, 1983, 58-60)

In the Eastern Orthodox Church the bread and wine that are consecrated during the Divine Liturgy are referred to as "the Gifts." They are first of all the gifts of the community (both individually and corporately) to God, and then, after the epiklesis, the Gifts of the Body and Blood of Christ to the Church.

Ritual sacrifices can be seen as return gifts to a deity.