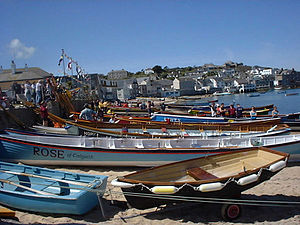 A lineup of gigs on St. Mary's, Isles of Scilly during the world pilot gig championships 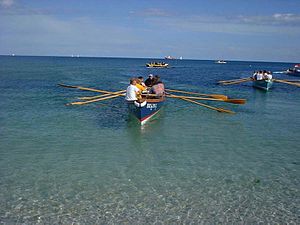 A Pilot Gig returning from a race at Falmouth

It is recognised as one of the first shore-based lifeboats that went to vessels in distress, with recorded rescues going back as far as the late 17th century.

The original purpose of the Cornish pilot gig was as a general work boat, and the craft is used for taking pilots out to incoming vessels off the Atlantic. At the time, the race would be the first gig to get their pilot on board a vessel (often those about to run aground on rocks) got the job, and hence the payment.

Today, pilot gigs are used primarily for sport, with around 100 clubs across the globe. The main concentration is within Cornwall and the Isles of Scilly, however clubs exist in Somerset, Devon, Dorset, Wales and London. Internationally there are pilot gig clubs in France, the Netherlands, the Faroe Islands, Australia and the USA.

All modern racing gigs are based on the "Treffry", built in 1838 by William Peters of St. Mawes, and still owned and raced by the Newquay Rowing Club. However non-racing gigs have been built which do not conform to the exact specification of the Treffry and are disallowed from racing in competitive races.

The sport is governed by the Cornish Pilot Gig Association, which monitors all racing gigs during the construction phase. The Association's Standards Officer is responsible for measuring every gig at least three times during construction, to ensure that it conforms to the Standard set by the Association.

The 100th gig, built for the Bude Gig Club by Ralph Bird was launched during the summer of 2005.

Currently there are 128 gigs on the CPGA register of gigs, this does not include the Isles of Scilly. The most recent being 'Tamar' of the Tamar Tavy Club, but by the end of 2008 there will be 131 gigs with an additional three gigs that are currently under construction now - Ilfracombe, Lyme Regis and Mevagissey.

Since 1990, the World Pilot Gig Championships have been held annually on the Isles of Scilly. Held over the first May bank holiday weekend, they are attended by over 2000 rowers and spectators, and is widely believed to be the busiest weekend on the islands, with an approximate doubling of population.

At the 2005 championships, Caradon triumphed coming 1st and 2nd in the Men’s race and 3rd in the Ladies. Falmouth won the Ladies, with Isles of Scilly coming 2nd. Par Bay came 3rd. Men's results Ladies results