From Infogalactic: the planetary knowledge core
Jump to: navigation, search
Not to be confused with Gillet.

Gillette is a brand of men's safety razors and other personal care products including shaving supplies, owned by the multi-national corporation Procter & Gamble (P&G).

Based in Boston, Massachusetts, United States, it was originally owned by The Gillette Company, a supplier of products under various brands until that company merged into P&G in 2005. The Gillette Company was founded by King C. Gillette in 1901 as a safety razor manufacturer.[1]

Under the leadership of Colman M. Mockler Jr. as CEO from 1975–91, the company was the target of three takeover attempts, from Ronald Perelman and Coniston Partners.[2] On October 1, 2005, Procter & Gamble finalized its merger with the Gillette Company.

The Gillette Company's assets were incorporated into a P&G unit known internally as "Global Gillette". In July 2007, Global Gillette was dissolved and incorporated into Procter & Gamble's other two main divisions, Procter & Gamble Beauty and Procter & Gamble Household Care. Gillette's brands and products were divided between the two accordingly. However, both the Gillette R&D center in Boston, Massachusetts as well as the Gillette South Boston Manufacturing Center (known as "Gillette World Shaving Headquarters"), still exist as functional working locations under the Procter & Gamble-owned Gillette brand name.[3] Gillette's subsidiaries Braun, Duracell (until 2014) and Oral-B, among others, have also been maintained by P&G. 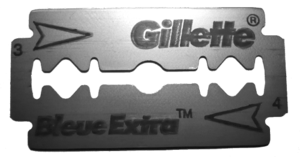 The first safety razor using the new disposable blade went on sale in 1903.[4] Gillette maintained a limited range of models of this new type razor until 1934 and the introduction of the "Aristocrat". The great innovation of this new model was the "Twist to Open", or TTO design, which made blade changing much easier than it had been previously, wherein the razor head had to be detached from the handle.

1947 saw the introduction of the new "Super Speed" model, also a TTO design. This was updated in 1954, with different versions being produced to shave more closely—the degree of closeness being marked by the color of the handle tip.

In 1958, the first "adjustable" razor was produced. This allowed for an adjustment of the blade to increase the closeness of the shave. The model, in various versions, remained in production until 1986.

The Super Speed razor was again redesigned in 1966 and given a black resin coated metal handle. It remained in production until 1988. A companion model, "The Knack", with a longer plastic handle, was produced from 1966 to 1976. In Europe, the Knack was sold as "Slim Twist" and "G2000" from 1978 to 1988, a later version known as "G1000" was made in England and available until 1998. A modern version of the Tech, with a plastic thin handle, is still produced and sold in several countries under the names 7 O'clock, Gillette, Nacet, Minora, Rubie and Economica.[citation needed]

Trac II blades are still made by American and foreign razor blade companies. American Safety Razor Company make a Trac II version blade in the U.S. called the Personna Twin II Plus. In India the Supermax and Gallant brands manufacture Trac II handles and blades. According to USRazor, sales of the Trac II style razor have always been strong and have increased over the last few years due to consistent quality and increased consumer demand.[citation needed]

The Sensor for Women was released around the same time and is nearly identical, but has a wider cartridge head.

The Mach3 featured five improved microfins and spring blades, a pivoting head with greater flexibility and a blue lubrication strip that faded with usage to encourage users to change their blades more frequently.

All Mach3 blades are interchangeable between the three products in the range, so it is possible to use the Mach3 Turbo blades on a Mach3 razor.

The lubrication and microfins are identical to Mach3Turbo. The Mach3 Power Nitro has a slightly different handle design.

Another version of the Breeze, the Venus Spa Breeze, is essentially the same as the Breeze, but with a white tea scent to the shave gel bars.[5]

The ProGlide series feature re-engineered blades with edges that are thinner than Fusion and are finished with low-resistance coating which the company claims allow the blades to glide more easily through hair.[8]

The ProGlide FlexBall has a handle allows the razor cartridge to pivot. Gillette claims that it means 20% fewer missed hairs, the ability to cut hairs 23 microns shorter, and 23% increased skin contact.

The desire to release ever more expensive products, each claiming to be the best ever, has led Gillette to make disputed claims for its products. In 2005, an injunction was brought by rival Wilkinson Sword which was granted by the Connecticut District Court which determined that Gillette's claims were both "unsubstantiated and inaccurate" and that the product demonstrations in Gillette's advertising were "greatly exaggerated" and "literally false". While advertising in the United States had to be rewritten, the court's ruling does not apply in other countries.[9]

Procter & Gamble (P&G) shaving products have been under investigation by the UK Office of Fair Trading as part of an inquiry into alleged collusion between manufacturers and retailers in setting prices. According to the Daily Mail newspaper, an industry insider claimed that the Fusion range of blades cost only £0.05 each to manufacture, yet sold for up to £2.43: a mark-up price of more than 4,750%.[10]

In 1999, Gillette, as a company, was worth US$43 billion, and it was estimated that the brand value of Gillette was worth US$16 billion. This equated to 37% of the company's value, which was the same as DaimlerChrysler, one of the world's largest car manufacturers at the time.[11]

Gillette has a long history of promotions for its products, especially towards young men. Current promotions include sponsorship of sports events such as Major League Baseball (since the 1940s, when it was the only sponsor for World Series television broadcasts) and the England national rugby league team, along with the Rugby League Four Nations. Gillette ships a razor to males in the United States around the time of their 18th birthday; as of 2010 Gillette has been sending the Fusion ProGlide. Athletes such as Roger Federer, Tiger Woods, Shoaib Malik, Derek Jeter, Thierry Henry, Kenan Sofuoglu, Park Ji-Sung, Rahul Dravid, and Michael Clarke are sponsored by the company.[citation needed]

There were calls to boycott Gillette products given their association with Thierry Henry, after a handball by Henry went undetected by referees and allowed France to knock Ireland out of qualifying for the 2010 FIFA World Cup. Marketing experts have highlighted "the curse of Gillette", given the mishaps that happen to sports stars associated with the brand.[12]

Until the late 1980s, Gillette Canada's headquarters were in the Montreal suburb of Mont-Royal, Quebec until they moved west to another Montreal suburb in Kirkland. The Kirkland offices were closed in 1999 and Gillette Canada moved to Mississauga, Ontario, a Toronto suburb following the Gillette acquisition of Duracell. The Mississauga offices were closed in 2005-06 after Procter & Gamble acquired Gillette, and Gillette's Canadian headquarters are located in downtown Toronto with parent Procter & Gamble on Yonge St.[citation needed]