From Infogalactic: the planetary knowledge core
Jump to: navigation, search
This article is about the alcoholic beverage. For the card game, see Gin rummy. For other uses, see Gin (disambiguation). 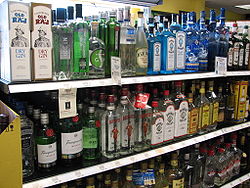 A selection of bottled gins offered at a liquor store

Gin is a spirit which derives its predominant flavour from juniper berries (Juniperus communis). From its earliest origins in the Middle Ages, gin has evolved over the course of a millennium from a herbal medicine to an object of commerce in the spirits industry. Gin was developed on the basis of the older jenever, and became popular in Great Britain when William of Orange, leader of the Dutch Republic, occupied the English and Scottish thrones with his wife Mary. Gin is one of the broadest categories of spirits, represented by products of various origins, styles, and flavour profiles that all revolve around juniper as a common ingredient.[1][2]

The name "gin" is derived from genièvre (French) and jenever (Dutch), both of which mean "juniper".

Although several different styles of gin have evolved, it is legally differentiated into four categories in the European Union, which are described as follows.[1]

Juniper-flavoured spirit drinks
This includes the earliest class of gin, which is produced by pot distilling a fermented grain mash to moderate strength (e.g. 68% ABV), and then redistilling it with botanicals to extract the aromatic compounds. It must be bottled at a minimum of 30% ABV. Juniper-flavoured spirit drinks may also be sold under the names Wacholder or Genebra.
Gin
This is a juniper-flavoured spirit made not via the redistillation of botanicals, but by simply adding approved natural flavouring substances to a neutral spirit of agricultural origin. The predominant flavour must be juniper.
Distilled gin
Distilled gin is produced exclusively by redistilling ethanol of agricultural origin with an initial strength of 96% ABV (the azeotrope of water and ethanol) in stills traditionally used for gin, in the presence of juniper berries and of other natural botanicals, provided that the juniper taste is predominant. Gin obtained simply by adding essences or flavourings to ethanol of agricultural origin is not distilled gin.
London gin
London gin is obtained exclusively from ethanol of agricultural origin with a maximum methanol content of 5 grams per hectolitre of 100% ABV equivalent, whose flavour is introduced exclusively through the re-distillation in traditional stills of ethanol in the presence of all the natural plant materials used, the resultant distillate of which is at least 70% ABV. London gin may not contain added sweetening exceeding 0.1 grams of sugars per litre of the final product, nor colorants, nor any added ingredients other than water. The term London gin may be supplemented by the term "dry".

In the EU, the minimum bottled alcoholic strength for gin, distilled gin, and London gin is 37.5% ABV.

In the United States, gin is defined as an alcoholic beverage of no less than 40% ABV (80 proof) that possesses the characteristic flavour of juniper berries. Gin produced only through distillation or redistillation of aromatics with an alcoholic wash can be further distinguished and marketed as "distilled gin".[2]

Several different techniques for the production of gin have evolved since its early origins, this evolution being reflective of ongoing modernization in distillation and flavouring techniques. As a result of this evolution, gins can be broadly differentiated into three basic styles.[3]

Popular botanicals and/or flavouring agents for gin often include citrus elements, such as lemon and bitter orange peel, as well as a combination of other spices, which may include any of anise, angelica root and seed, orris root, licorice root, cinnamon, almond, cubeb, savory, lime peel, grapefruit peel, dragon eye, saffron, baobab, frankincense, coriander, grains of paradise, nutmeg, cassia bark, and/or others.

The Dutch physician Franciscus Sylvius is often falsely credited with the invention of gin in the mid 17th century,[5][6] although the existence of genever is confirmed in Philip Massinger's play The Duke of Milan (1623), when Sylvius would have been about nine years old. It is further claimed that English soldiers who provided support in Antwerp against the Spanish in 1585, during the Eighty Years' War, were already drinking genever for its calming effects before battle, from which the term Dutch Courage is believed to have originated.[7] 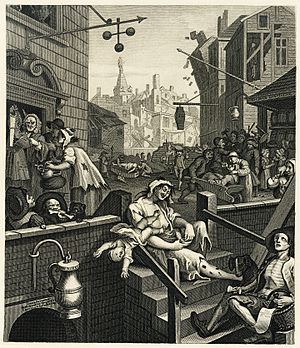 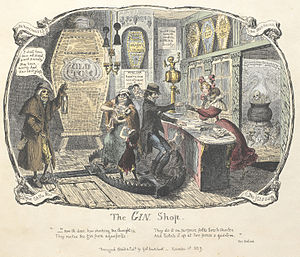 Cruikshank's engraving of The Gin Shop (1829)

By the mid 17th century, numerous small Dutch and Flemish distillers (some 400 in Amsterdam alone by 1663) had popularized the re-distillation of malt spirit or malt wine with juniper, anise, caraway, coriander, etc.,[9] which were sold in pharmacies and used to treat such medical problems as kidney ailments, lumbago, stomach ailments, gallstones, and gout. Gin emerged in England in varying forms as of the early 17th century, and at the time of the Restoration, enjoyed a brief resurgence. When William of Orange, ruler of the Dutch Republic, occupied the British throne with his wife Mary in what has become known as the Glorious Revolution, gin became vastly more popular,[10] particularly in crude, inferior forms, where it was more likely to be flavoured with turpentine[11] as an alternative to juniper.

Gin drinking in England rose significantly after the Government allowed unlicensed gin production and at the same time imposed a heavy duty on all imported spirits. This created a market for poor-quality grain that was unfit for brewing beer, and thousands of gin-shops sprang up throughout England, a period known as the Gin Craze. Because of the relative price of gin, when compared with other drinks available at the same time and in the same geographic location, gin began to be consumed regularly by the poor.[12] Of the 15,000 drinking establishments in London, not including coffee shops and drinking chocolate shops, over half were gin shops. Beer maintained a healthy reputation as it was often safer to drink the brewed ale than unclean plain water. Gin, though, was blamed for various social problems, and it may have been a factor in the higher death rates which stabilized London's previously growing population.[10] The reputation of the two drinks was illustrated by William Hogarth in his engravings Beer Street and Gin Lane (1751), described by the BBC as "arguably the most potent anti-drug poster ever conceived."[13] The negative reputation of gin survives today in the English language, in terms like "gin mills" or the American phrase "gin joints" to describe disreputable bars or "gin-soaked" to refer to drunks, and in the phrase "mother's ruin", a common British name for gin.

The Gin Act 1736 imposed high taxes on retailers and led to riots in the streets. The prohibitive duty was gradually reduced and finally abolished in 1742. The Gin Act 1751 was more successful, however; it forced distillers to sell only to licensed retailers and brought gin shops under the jurisdiction of local magistrates.[10] Gin in the 18th century was produced in pot stills, and was somewhat sweeter than the London gin known today.

In London in the early 18th century, much gin was distilled legally in residential houses (there were estimated to be 1,500 residential stills in 1726) and was often flavoured with turpentine to generate resinous woody notes in addition to the juniper.[14] As late as 1913, Webster's Dictionary states without further comment, " 'common gin' is usually flavoured with turpentine".[11]

Another common variation was to distill in the presence of sulphuric acid. Although the acid itself does not distil, it imparts the additional aroma of diethyl ether to the resulting gin. Sulphuric acid subtracts one water molecule from two ethanol molecules to create diethyl ether, which also forms an azeotrope with ethanol, and therefore distils with it. The result is a sweeter spirit, and one that may have possessed additional analgesic/intoxicating effects – see Paracelsus.

Dutch or Belgian gin, also known as jenever or genever, evolved from malt wine spirits, and is a distinctly different drink from later styles of gin. Schiedam, a city in the province of South Holland, is famous for its jenever-producing history. The oude (old) style of jenever remained very popular throughout the 19th century, where it was referred to as "Holland" or "Geneva" gin in popular, American, pre-Prohibition bartender guides.[15]

The 19th century gave rise to a style of gin referred to as Old Tom Gin, which is a softer, sweeter style of gin, often containing sugar. Old Tom gin faded in popularity by the early 20th century.

The invention and development of the column still (1826–31)[16] made the distillation of neutral spirits practical, thus enabling the creation of the "London dry" style that evolved later in the 19th century.

In tropical British colonies gin was used to mask the bitter flavour of quinine, which was the only effective anti-malarial compound. Quinine was dissolved in carbonated water to form tonic water; the resulting cocktail is gin and tonic, although modern tonic water contains only a trace of quinine as a flavouring. Gin is a common base spirit for many mixed drinks, including the martini. Secretly produced "bathtub gin" was available in the speakeasies and "blind pigs" of Prohibition-era America as a result of the relative simple production.

Sloe gin is traditionally described as a liqueur made by infusing sloes (the fruit of the blackthorn) in gin, although modern versions are almost always compounded from neutral spirits and flavourings. Similar infusions are possible with other fruits, such as damsons[17] or beach plums.[18]

The National Jenever Museums are located in Hasselt, Belgium, and Schiedam, the Netherlands.

Since 2009 the second Saturday in June is dedicated to World Gin Day.

A well known gin cocktail is the martini, traditionally made with gin and dry vermouth. Several other notable gin-based drinks include: