From Infogalactic: the planetary knowledge core
Jump to: navigation, search
For other uses, see Ginger (disambiguation).

Ginger (Zingiber officinale Roscoe) is a flowering plant, in the family Zingiberaceae whose rhizome, ginger root or simply ginger, is widely used as a spice or a folk medicine.

It is a herbaceous perennial which grows annual stems about a meter tall bearing narrow green leaves and yellow flowers. Ginger is indigenous to south China, and was spread eventually to the Spice Islands, other parts of Asia and subsequently to West Africa.[2] Ginger was exported to Europe via India in the first century AD as a result of the lucrative spice trade and was used extensively by the Romans.[2][3] India is now the largest producer of ginger.[2][4]

Other members of the family Zingiberaceae include turmeric, cardamom, and galangal. The distantly related dicots in the genus Asarum are commonly called wild ginger because of their similar taste.

The origin of "ginger" is from the mid-14th century, from Old English gingifer, from Medieval Latin gingiber, from Latin zingiberi, from Greek zingiberis, from Prakrit (Middle Indic) singabera, from Sanskrit srngaveram, from srngam "horn" + vera- "body", from the shape of its root. But this may be Sanskrit folk etymology, and the word may be from an ancient Dravidian name that also produced the Tamil and Malayalam name for the spice, inchi-ver, from inchi "root." cf. gin (v.). The word probably was readopted in Middle English from Old French gingibre (modern French gingembre).[5][6] 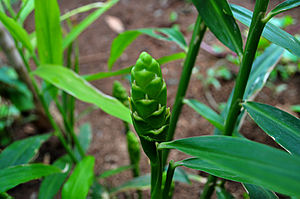 Ginger produces clusters of white and pink flower buds that bloom into yellow flowers. Because of its aesthetic appeal and the adaptation of the plant to warm climates, ginger is often used as landscaping around subtropical homes. It is a perennial reed-like plant with annual leafy stems, about a meter (3 to 4 feet) tall. Traditionally, the rhizome is gathered when the stalk withers; it is immediately scalded, or washed and scraped, to kill it and prevent sprouting. The fragrant perisperm of Zingiberaceae is used as sweetmeats by Bantu, and also as a condiment and sialagogue.[7]

Ginger produces a hot, fragrant kitchen spice.[9] Young ginger rhizomes are juicy and fleshy with a very mild taste. They are often pickled in vinegar or sherry as a snack or cooked as an ingredient in many dishes. They can be steeped in boiling water to make ginger tisane, to which honey is often added; sliced orange or lemon fruit may be added. Ginger can be made into candy, or ginger wine, which has been made commercially since 1740.

Mature ginger rhizomes are fibrous and nearly dry. The juice from ginger roots is often used as a spice in Indian recipes and is a common ingredient of Chinese, Korean, Japanese, Vietnamese, and many South Asian cuisines for flavoring dishes such as seafood, meat, and vegetarian dishes.

Fresh ginger can be substituted for ground ginger at a ratio of six to one, although the flavors of fresh and dried ginger are somewhat different. Powdered dry ginger root is typically used as a flavoring for recipes such as gingerbread, cookies, crackers and cakes, ginger ale, and ginger beer.

Candied ginger, or crystallized ginger, is the root cooked in sugar until soft, and is a type of confectionery.

Fresh ginger may be peeled before eating. For longer-term storage, the ginger can be placed in a plastic bag and refrigerated or frozen. 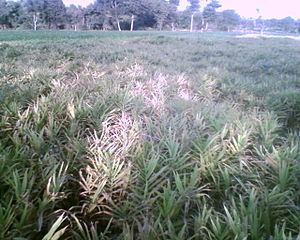 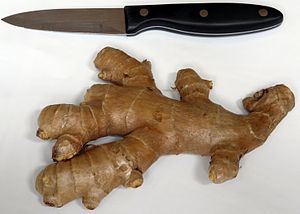 In Indian cuisine, ginger is a key ingredient, especially in thicker gravies, as well as in many other dishes, both vegetarian and meat-based. Ginger also has a role in traditional Ayurvedic medicine. It is an ingredient in traditional Indian drinks, both cold and hot, including spiced Masala chai. Fresh ginger is one of the main spices used for making pulse and lentil curries and other vegetable preparations. Fresh ginger together with peeled garlic cloves is crushed or ground to form ginger garlic masala. Fresh, as well as dried, ginger is used to spice tea and coffee, especially in winter. Ginger powder is used in food preparations intended primarily for pregnant or nursing women, the most popular one being katlu, which is a mixture of gum resin, ghee, nuts, and sugar. Ginger is also consumed in candied and pickled form. Tea can be made using ginger.

In Japan, ginger is pickled to make beni shoga and gari or grated and used raw on tofu or noodles. It is made into a candy called shoga no sato zuke. In the traditional Korean kimchi, ginger is either finely minced or just juiced to avoid the fibrous texture and added to the ingredients of the spicy paste just before the fermenting process. 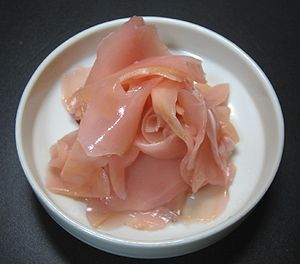 Gari, a type of pickled ginger

In Burma, ginger is called gyin. It is widely used in cooking and as a main ingredient in traditional medicines. It is consumed as a salad dish called gyin-thot, which consists of shredded ginger preserved in oil, with a variety of nuts and seeds.

In Thailand where it is called ขิง khing, it is used to make a ginger garlic paste in cooking.

In Indonesia, a beverage called wedang jahe is made from ginger and palm sugar. Indonesians also use ground ginger root, called jahe, as a common ingredient in local recipes.

In Malaysia, ginger is called halia and used in many kinds of dishes, especially soups.

Called luya in the Philippines, ginger is a common ingredient in local dishes and is brewed as a tea called salabat.[10][11] 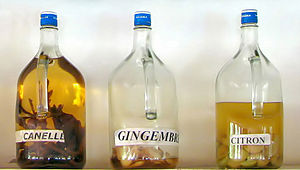 In Vietnam, the fresh leaves, finely chopped, can be added to shrimp-and-yam soup (canh khoai mỡ) as a top garnish and spice to add a much subtler flavor of ginger than the chopped root.

In China, sliced or whole ginger root is often paired with savory dishes such as fish, and chopped ginger root is commonly paired with meat, when it is cooked. Candied ginger is sometimes a component of Chinese candy boxes, and a herbal tea can be prepared from ginger.

In the Caribbean, ginger is a popular spice for cooking and for making drinks such as sorrel, a drink made during the Christmas season. Jamaicans make ginger beer both as a carbonated beverage and also fresh in their homes. Ginger tea is often made from fresh ginger, as well as the famous regional specialty Jamaican ginger cake. 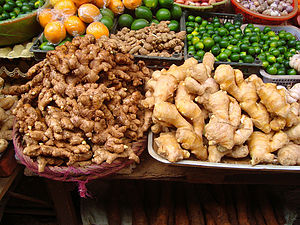 Two varieties of ginger as sold in Haikou, Hainan, China

On the island of Corfu, Greece, a traditional drink called τσιτσιμπύρα (tsitsibira), a type of ginger beer, is made. The people of Corfu and the rest of the Ionian islands adopted the drink from the British, during the period of the United States of the Ionian Islands.

In Arabic, ginger is called zanjabil and in some parts of the Middle East, gin�gayu (生姜湯).[12] The Hebrew name for the spice, zangevil, is a variation on the name.

In Western cuisine, ginger is traditionally used mainly in sweet foods such as ginger ale, gingerbread, ginger snaps, parkin, ginger biscuits, and speculaas. A ginger-flavored liqueur called Canton is produced in Jarnac, France. Ginger wine is a ginger-flavored wine produced in the United Kingdom, traditionally sold in a green glass bottle. Ginger is also used as a spice added to hot coffee and tea.

In 100 grams, ground dried ginger (10% water) provides numerous essential nutrients in high content, particularly the dietary mineral manganese as a multiple of its Daily Value (DV, table). In a typical spice serving amount of one US tablespoon or 5 g, however, ginger powder provides negligible content of essential nutrients, with the exception of manganese present as 79% of DV (USDA database).

Due to its higher content of water (80%), raw ginger root has lower overall nutrient content when expressed per 100 grams (table).

If consumed in reasonable quantities, ginger has few negative side effects.[13] It is on the FDA's "generally recognized as safe" list,[14] though it does interact with some medications, including the anticoagulant drug warfarin[15] and the cardiovascular drug, nifedipine.[16]

Products of Chinese origin found in Taiwan contained ginger contaminated with diisobutyl phthalate, causing some 80,000 nutritional supplement capsules made with imported ginger powder to be seized by the Public Health Department of Taiwan in June 2011.[17]

The characteristic odor and flavor of ginger is caused by a mixture of zingerone, shogaols, and gingerols, volatile oils that compose one to three percent of the weight of fresh ginger. In laboratory animals, the gingerols increase the motility of the gastrointestinal tract and have analgesic, sedative, antipyretic, and antibacterial properties.[18] Gingerols can inhibit growth of ovarian cancer cells in vitro.[19][20][21] [6]-gingerol (1-[4'-hydroxy-3'-methoxyphenyl]-5-hydroxy-3-decanone) is the major pungent principle of ginger.

Ginger contains up to 3% of a fragrant essential oil whose main constituents are sesquiterpenoids, with (−)-zingiberene as the main component. Smaller amounts of other sesquiterpenoids (β-sesquiphellandrene, bisabolene, and farnesene) and a small monoterpenoid fraction (β-phelladrene, cineol, and citral) have also been identified.

The pungent taste of ginger is due to nonvolatile phenylpropanoid-derived compounds, particularly gingerols and shogaols, which form from gingerols when ginger is dried or cooked. Zingerone is also produced from gingerols during this process; this compound is less pungent and has a spicy-sweet aroma.[22] Ginger is a minor chemical irritant and, because of this, was used as a horse suppository by pre-World War I mounted regiments for feaguing.

Ginger has a sialagogue action, stimulating the production of saliva, which makes swallowing easier.[23]

Another plant in the Zingiberaceae family, galangal, is used for similar purposes as ginger in Thai cuisine. Galangal is also called Thai ginger, fingerroot (Boesenbergia rotunda), Chinese ginger, or the Thai krachai.

A dicotyledonous native species of eastern North America, Asarum canadense, is also known as "wild ginger", and its root has similar aromatic properties, but it is not related to true ginger. The plant contains aristolochic acid, a carcinogenic compound.[24] The United States Food and Drug Administration warns that consumption of aristolochic acid-containing products is associated with "permanent kidney damage, sometimes resulting in kidney failure that has required kidney dialysis or kidney transplantation. In addition, some patients have developed certain types of cancers, most often occurring in the urinary tract."[24]

Medicinal use and research

Oral or topical uses of ginger to treat various disorders, such as nausea or arthritis pain, are under research, but there are no conclusions possible from these studies about its effectiveness or safety in long-term use.[16]

In limited studies, ginger was found to be more effective than placebo for treating nausea caused by seasickness, morning sickness, and chemotherapy,[16][25][26] although it was not found superior to placebo for treating postoperative nausea. Some studies indicate taking ginger during pregnancy may cause harm to the fetus or increase the mother's risk of bleeding.[16][26]

Studies are inconclusive about the effects of using ginger for nausea or pain associated with various ailments. Side effects, mostly associated with consuming powdered ginger, are gas, bloating, heartburn and nausea.[16][27]

Allergic reactions to ginger generally result in a rash.[16] Although generally recognized as safe, ginger can cause heartburn and other side effects, particularly if taken in powdered form. Unchewed fresh ginger may result in intestinal blockage, and individuals who have had ulcers, inflammatory bowel disease, or blocked intestines may react badly to large quantities of fresh ginger.[16] It can also adversely affect individuals with gallstones.[28] There are suggestions that ginger may affect blood pressure, clotting, and heart rhythms.[16]

One traditional medical form of ginger historically was called "Jamaica ginger"; it was classified as a stimulant and carminative and used frequently for dyspepsia, gastroparesis, slow motility symptoms, constipation or colic.[16][29] It was also frequently employed to disguise the taste of medicines.