Giovanni Pascoli was born at San Mauro di Romagna (in his honor renamed "San Mauro Pascoli" in 1932), into a well-to-do family. He was the fourth of ten children of Ruggero Pascoli and Caterina Vincenzi Alloccatelli. His father was administrator of an estate of farm land of the Princes Torlonia on which the Pascoli family lived.

On the evening of Aug. 10, 1867 as Ruggero Pascoli was returning home from the market at Cesena in a carriage drawn by a black and white mare (una cavalla storna), he was shot and killed by an assassin hiding in a ditch by the road. The mare continued slowly on her way and brought home the body of her slain master. The murderer was never apprehended.

Giovanni Pascoli had a tragic childhood, struck by the murder of his father and the early deaths of his mother, sister and two brothers, and the subsequent financial decline of the family. The father's assassination echoes in particular in one of his most popular poems, "La cavalla storna". His whole first work, Myricae (1891), reflects his unhappy childhood.

In 1871 he moved to Rimini with six of his brothers. Here he made friends with Andrea Costa, and began to participate in Socialist demonstrations. This led to another key event in Pascoli's life, his brief imprisonment in Bologna following a protest against the capture of the anarchist Giovanni Passannante, who attempted to kill Humbert I. Pascoli composed an Ode to Passannante, which he tore up soon after reading it during a socialist gathering in Bologna.

Pascoli studied at the University of Bologna, where his teacher and mentor was Giosuè Carducci. He graduated in 1882, and began to teach in high schools in Matera and Massa. He lived next to his sisters Ida and Maria, in an attempt to renew the original family, building a "nest" (as he called it) for the sisters and himself. Although he was almost married, it is speculated that he never did because of an immature and perhaps ambiguous relationship with his sisters.

In the meantime he began to collaborate with the magazine Vita nuova, which published his first poems later collected in Myricae. In 1894 Pascoli was called to Rome to work for the Ministry of Public Instruction, and there he published the first version of Poemi conviviali. Later he moved between cities living in Bologna, Florence and Messina, but remained always psychologically rooted to his original, idealized peasant origins.

In 1895 he and his sister Maria moved into a house at Castelvecchio, near Barga, in Tuscany, bought with money gained from literary awards. The political and social turmoil of the early 20th century, which was to lead to Italy's participation in World War I and to the advent of Fascism, further strengthened Pascoli's insecurity and pessimism.

From 1897 to 1903 he taught Latin at the University of Messina, and then in Pisa. When Carducci retired, Pascoli replaced him as professor of Italian literature at the University of Bologna. In 1912, already ill of cirrhosis (from alcohol abuse), Giovanni Pascoli died of liver cancer at the age of 56 in Bologna. An atheist,[1] he was entombed in the chapel annexed to his house at Castelvecchio, where his beloved sister, Maria, would also be laid to rest.

His earlier poems look simple, and focus particularly on domestic life and nature. However, Pascoli, even in that period of Positivism and scientism, believed that life is a mystery; only symbolic associations discovered in the humble things of nature can lead man to catch a glimpse of the truth behind mere appearances.

His later poems share similar themes but are more experimental, and reflect his knowledge of classical antiquity. They were a great influence on later Italian poets, who incorporated his melancholy themes into their own works. He wrote in both Italian and Latin; he also translated English poetry. His numerous poems in Latin gained many international awards.

In 1897 Pascoli issued a detailed definition of his poetical stance, which he called poetica del fanciullino ("poetics of the child") and which showed the influence of Sully and von Hartmann. Poetry, according to Pascoli, would be the unceasing capability to get stunned by the world, typical of childhood, secondarily connected to the expressive capabilities of the aged. In a refusal of both Classicism and Romanticism, Pascoli opposed both the renunciation of self-analysis and the abandonment of the self-centered point of view, in favour of a semi-irrational comfort which the poet gives himself through poetry.

Pascoli's poetry shows interesting affinities with European symbolism, even if direct influences cannot be demonstrated. A wide use of analogy and synesthesia, a very subtle musicality, a lexicon open both to foreign languages and to vernacular or onomatopeic voices are major signs of a literary research oriented towards modern poetical language.

Part of Pascoli's work was translated into English by Lawrence Venuti, who in 2007 was awarded a Guggenheim Fellowship in Humanities for that reason.[2] In 2010 Red Hen Press published first appearance of Pascoli’s poems in English translation, under the title "Last Voyage: Selected Poems of Giovanni Pascoli." Other poems have been translated into English by Taije Silverman in various venues including The Nation.

Pascoli was also known as a prose essayist and for his Dante studies.[3] 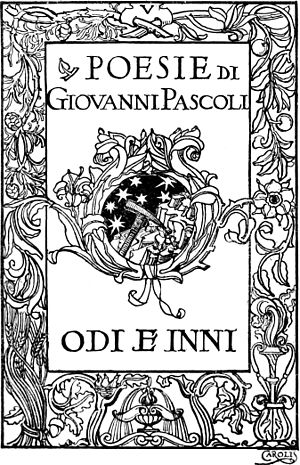