Gipuzkoa (in Basque and also the official form since 2011; in Spanish: Guipúzcoa; French: Guipuscoa) is a province of Spain and a historical territory of the autonomous community of the Basque Country. Its capital city is Donostia-San Sebastián. Gipuzkoa shares borders with the French department of Pyrénées-Atlantiques at the northeast, with the province and autonomous community of Navarre at east, Biscay at west, Álava at southwest and the Bay of Biscay to its north. It is located at the easternmost extreme of the Cantabric Sea, in the Bay of Biscay. It has 66 km of coast land.

With a total area of 1,980 square kilometers, Gipuzkoa is the smallest province of Spain. The province has 89 municipalities and a population of 715,148 inhabitants (2014), from which more than half live in the Donostia-San Sebastián metropolitan area. Apart from the capital, other important cities are Irun, Errenteria, Zarautz, Mondragón, Eibar, Hondarribia, Oñati, Tolosa, Beasain and Pasaia.

The oceanic climate gives the province an intense green color with little thermic oscillation. Gipuzkoa is the province of the Basque Country where the Basque language is most extensively used: 49.1% of the population speak Basque.[1]

The first recorded name of the province was Ipuscoa in a document from the year 1025.[2] During the following years, and in various documents, several similar names appear, such as Ipuzcoa, Ipuçcha, Ipuzka, among others.

The full etymology the word Gipuzkoa has not been fully ascertained, but links have been made with the Basque word Giputz,[2] containing the root ip- which is related to the word ipar (north), ipurdi (back) and ipuin (tale). According to this, ipuzko (one of the several first known denominations) might refer to something "to the north" or "in the north".[2]

Gipuzkoa is also the only official spelling approved for the historical territory by the Juntas Generales of the province.

At 1,980 km2 (764 sq mi) Gipuzkoa is the smallest province in Spain. The province has 88 municipalities and 709,607 inhabitants (2011), a quarter of whom live in the capital, San Sebastián. Other important towns are Irun, Errenteria, Zarautz, Arrasate, Oñati with an old university, Eibar, Tolosa which was the provincial capital for a short time, Beasain, Pasaia, the main port and Hondarribia, an old fort town across from the French Atlantic coast.

Gipuzkoa is hilly and green linking mountain and sea, and heavily populated with numerous urban nuclei that dot the whole territory. The conspicuous presence of hills and rugged terrain has added to a special leaning towards hiking, nature and mountains on the part of Gipuzkoans. Some mountains have an emblematic or iconic significance in the local tradition, their summits being topped with crosses, memorials and mountaineer postboxes. In addition, pilgrimages which have gradually lost their former religious zeal and taken on a more secular slant are sometimes held to their summits. Some renowned mountains are Aiako Harria, Hernio, Txindoki, Aizkorri and Izarraitz, amongst others.

The Aralar Natural Park is a conservation area on the border of Gipuzkoa and Navarre in the Aralar Range.[3]

The rivers of Gipuzkoa are distinctly different from other Bay of Biscay rivers. They arise in the hilly Basque inland landscape (Basque Mountains), flow in a south- north direction, forming close, narrow valleys before joining the ocean. The rivers extend for a short length with only a small fluctuation in the volume of water thanks to the stable rainfall all year round, and they show an abrupt drop between origin and mouth as far as the length of the river is concerned. From west to east the rivers are the Deba, Urola, Oria, Urumea, Oiartzun and Bidasoa. Except for a narrow strip extending east from the hamlet Otzaurte (Zegama) and the tunnel of San Adrian, the province drains its waters to the Atlantic basin. 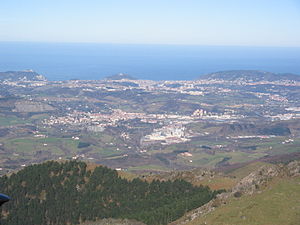 Bay of Biscay, San Sebastian and Hernani in Gipuzkoa 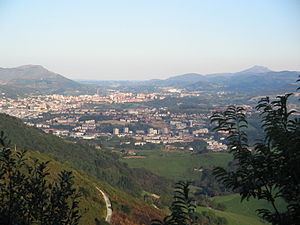 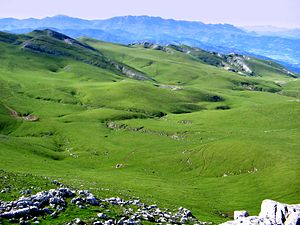 View to the SW from Ganbo Txiki in Aralar, with Aratz and the Aizkorri ridge in the background

The region's communication layout is in step with its geographical features, with the main lines of infrastructure along a north -south axis up to recent times along the rivers heading to the ocean. Accordingly, the inland Way of St. James, i.e. the Tunnel Route penetrated the province via Irun and turned south-west along the Oria River towards the provincial limits at the tunnel of San Adrian. This stretch was in operation up to 1765 when the Royal Road moved to the western Deba Valley. A minor St. James route crossed Gipuzkoa east to west along the coast.

Currently,[when?] the main road cutting through Gipuzkoa largely follows that layout, i.e. the N-1 E-5 from Irun to Donostia and on to Altsasu all along the Oria River for the most part (gateway to Navarre through the pass of Etxegarate). Also, the major Irun-Madrid railway runs close to the river up to its very origin on the slopes of Aizkorri at train stop Otzaurte in Zegama. By 1973 engineering works for the Bilbao-Behobia A-8 E-70 motorway had been completed, with the new road cutting across the valleys east to west and turning into the main axis between Donostia and Bilbao, besides enabling heavy load traffic to access the west and south of Spain as a toll road. The regional railway network Euskotren also follows along the coast from east to west, while it proves impractical for long distance on the grounds of its tortuous layout and as it serves small towns. The railway network reaches the border town Hendaia before it changes to SNCF.

The stretch of the A-15 motorway serving Gipuzkoa and Pamplona opened in 1995 embroiled in controversy under protest and an attack campaign led by ecologists, Basque leftist nationalists and eventually ETA. Conflict resolved after a deal about the definitive layout was struck . In January 2010, following a scheme drawn up by the regional government of Gipuzkoa to improve provisions for the ever increasing road traffic, the Maltzaga-Urbina AP-1 motorway stretch leading to Gasteiz was completed, providing likewise access to the industrial areas of Arrasate and Bergara, the gateway to Álava by village Landa). AP-1 and N-1 E-5 are connected by a highway east to west from Bergara and Beasain. European traffic to south of Spain avoids Donostia's metropolitan area by means of the southern outer road ring.

There are plans for a high-speed rail with an X-type layout and links to the SNCF network in Hendaia (NE), Vitoria (SE), Bilbao (W) and Pamplona (S) to be completeted by 2016. Contractors were appointed, works are in place although past schedule, while strong opposition (ecologists, Basque leftist nationalists,...) and serious financial tensions make its future uncertain.

The only airport in Gipuzkoa serving just domestic flights is the San Sebastian Airport located in Hondarribia, while the air transportation needs are usually served by the nearby Bilbao and Biarritz airports.

Gipuzkera, a dialect of the Basque language spoken in most of the region, shows a considerable vitality and holds a prominent position among other dialects. The Basque cultural element is apparent, including traditional dances and singing, bertsolaritza, trikiti and txistu music, baserris dotting the rural landscape, town festivals, and its signature heavy sculptures (stone, steel, iron) from the industrial tradition, all blending with the latest Basque, Spanish and international pop culture events and design trends centred in major urban areas (Donostia, Tolosa, etc.).

Traditionally a Catholic province, its patron saints are Ignatius of Loyola, born in the neighborhood of Loyola (Azpeitia) and founder of the Society of Jesus, and Our Lady of Arantzazu.