Girona–Costa Brava Airport (IATA: GRO, ICAO: LEGE) (Catalan: Aeroport de Girona-Costa Brava, Spanish: Aeropuerto de Girona-Costa Brava) is an airport located 12.5 km (7.8 mi) southwest[2] of the city of Girona, next to the small village of Vilobí d'Onyar, in the north-east of Catalonia, Spain. The airport is well connected to the Costa Brava and the Pyrenees. Girona Airport is used as an alternative airport for Barcelona as well, even though the airport is 92 km (57 mi)[3] north of Barcelona.

The airport was built in 1965,[4] but passenger traffic was modest.

The early 2000s saw passenger numbers grow spectacularly after Ryanair chose Girona as one of its European hubs. In 1993, Girona Airport dealt with only 275,000 passengers; in the six years from 2002 to 2008 passenger numbers increased by nearly ten times from just over 500,000 to more than 5.5 million, but half of these were lost again in the next 4 years until 2012 with only 2.8 million passengers.[5] 2014 saw less than 2.2 million passengers pass through the airport.

The airport consists of one two-storey passenger terminal building. On the ground floor there are 33 check-in desks, with 11 boarding gates on the first floor for both domestic and international flights.[6] Food is available in the departures area of the airport, as well as a few shops. 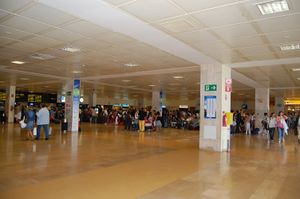 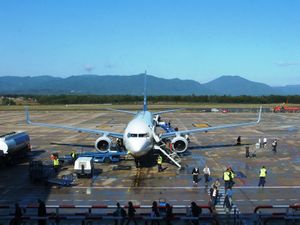 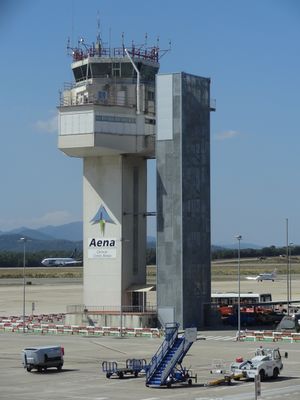 The following table shows total passenger numbers at Girona Airport from 1997 to date.

Alongside being an alternative option to Barcelona Airport, Girona Airport is convenient for the resorts along the Costa Brava, such as Lloret de Mar, l'Estartit and Blanes. It is about a 40-minute drive from the French border and many people use Girona Airport as a way of getting to the Pyrenees and the ski resorts of Andorra.

The airport is served by three main roads:

There are 6 bus lines operating in the airport: