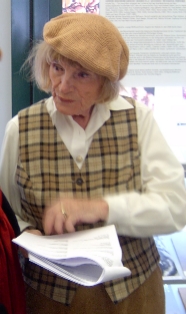 Gisela May is a German actress and singer born May 31, 1924, in Wetzlar, Rhine Province.

May studied at the drama school in Leipzig. She was employed for nine years at various theatres, including the State Theatre of Schwerin and the State Theatre in Halle. Starting in 1951, she performed at the Deutsches Theater in Berlin, Max Reinhardt's former workplace, where she played a variety of roles.

In 1962, May moved to Bertolt Brecht's theatre group, the Berliner Ensemble, and stayed for 30 years. While there she played a variety of roles, including Madame Cabet in The Days of the Commune, Mrs Peachum in The Threepenny Opera, Mrs Kopecka in Schweik in the Second World War, and Mother Courage in Mother Courage and Her Children. Since 1992, May has free-lanced, often working at Berlin's Renaissance Theatre.