Giuliano de' Medici (25 March 1453 – 26 April 1478) was the second son of Piero de' Medici (the Gouty) and Lucrezia Tornabuoni. As co-ruler of Florence, with his brother Lorenzo the Magnificent, he complemented his brother's image as the "patron of the arts" with his own image as the handsome, sporting, "golden boy."

For more details on this topic, see Pazzi conspiracy.

As the opening stroke of the Pazzi Conspiracy, he was assassinated on Sunday, 26 April 1478 in the Duomo of Florence, Santa Maria del Fiore, by Francesco de' Pazzi and Bernardo Baroncelli. He was killed by a sword wound to the head and was stabbed 23 times.[1] 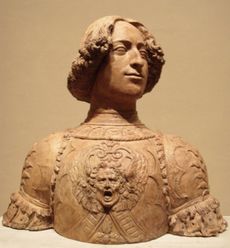 Giuliano was buried in his father's tomb in the Church of San Lorenzo but later, with his brother Lorenzo, was reinterred in the Medici Chapel of the same church, in an unmarked tomb surmounted by a statue of the Madonna and Child of Michelangelo.[1][2]

Guiliano de' Medici is portrayed by Tom Bateman in Starz's original series Da Vinci's Demons. He has an affair with Vanessa, who becomes pregnant with his child. He is murdered in the season 1 finale.

Angelo Poliziano wrote two works that have Giuliano de' Medici as a major character. Stanze per la giostra di Giuliano was written to commemorate a joust that Giuliano won in 1475. It is mostly fictionalized and involves Giuliano's love for Simonetta Vespucci. It was left unfinished, for both of his protagonists (Giuliano and Simonetta) died. The other work is Coniurationis Commentarium, which was written in 1478 to commemorate Giuliano's murder. It explains the people involved in the plot and the events of the day of his assassination.[3]