Giuseppe "Beppe" Sannino (born 30 April 1957) [1] is an Italian football coach and former player. He was last in charge of newly promoted Serie A side Carpi.

Born in Campania, Sannino relocated to Turin with his family after his father was hired by the Fiat automobile company in Turin. In his career, Sannino played as a creative attacking midfielder for several minor league teams, with Serie C2 club Vogherese being the one he became most associated with. Sannino retired from active football in 1988, after a lone season with Ligurian amateur club Entella.[2] 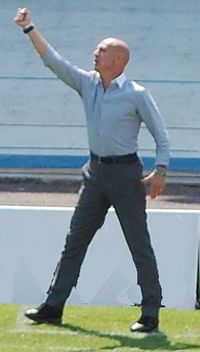 Sannino entered into a coaching career in 1990, as responsible of the Allievi (under-17) team at Vogherese. In 1992 he became youth coach at Pavia, and one year later he worked with the same role at Monza. In 1996 he took his first head coaching experience at amateur Eccellenza club Oltrepò, ending the season in sixth place.[3] After a short stint as youth coach at Como, in 1998 Sannino took his first head coaching role in a professional league at Serie C2 club Biellese: this experience however turned out to be disappointing, as he was dismissed before the end of the season.[3]

In 1999 he took a personal revenge as he led Serie D club F.C. Südtirol to first place in the league, and then keeping the club into Serie C2 the following season. In 2001–02 he guided Meda, another Serie C2 club, but was dismissed again before the end of the season. In 2002–03 he then led Sangiovannese to sixth place in the Serie C2 league. Two other unsuccessful stints, both ended with him being removed from managerial duties, followed at Varese and Cosenza F.C..[4][5] In 2005 he took the reins of Lecco, guiding the small Lombardian team to a surprise promotion to Serie C1 at his second season in charge of the club.[3] This was followed by three more consecutive promotions: the first at Pergocrema (from Serie C2 to Serie C1), and the other two at Varese, where he was appointed by Sean Sogliano during the season and successfully guided the club from Serie C2 to Serie B. In his first season in charge of a Serie B club, Sannino led Varese to a remarkable fourth place and a spot in the Serie A promotion playoffs, then lost to Padova in the semi-finals.[3]

On June 2011 Sannino signed a two-year contract as head coach of newly promoted Serie A club Siena, taking over from departing boss Antonio Conte who was signed by Italian giants Juventus. The aim for the small Tuscan club was to escape relegation in what was going to be Sannino's first experience in charge of a top flight club.[6] In the 2011–12 season, Sannino managed to keep Siena safely out of the relegation zone, and also led the club to the Coppa Italia semifinals, then lost to eventual winners Napoli.

On 6 June 2012 Sannino signed a two-year contract as head coach of Palermo, only a few weeks after Siena director of football Giorgio Perinetti made the same move to Sicily.[7] His short-lived experience with the Sicilians ended on 16 September 2012, when club chairman Maurizio Zamparini decided to remove him from first team duties after achieving only one point in the first three Serie A games; he was replaced by Gian Piero Gasperini.[8] He was rehired on 11 March 2013.[9] Despite an impressive string of results with a particularly difficult calendar (including wins against Inter and Roma), however, he failed to keep Palermo in the top flight. He was appointed as Chievo coach on the 1st of July. However he was sacked on the 11th of November.

On 18 December 2013 he was confirmed as new head coach of Watford.[10] On 15 March 2014, Sannino led Watford to a club record sixth consecutive home win in all competitions without conceding, with a 3–0 win against Barnsley.[11]

Despite winning four of the first five league games of the 2014/15 season, and with Watford sitting 2nd in the table, Sannino's future was subject to increased speculation following rumours of dressing-room unrest and some players taking a dislike to his management style. Sannino resigned from his position as Watford manager on 31 August 2014, his last game in charge being their 4-2 home win against Huddersfield Town the day before.

On 14 September 2014, Sannino returned into management, taking over as new head coach of Serie B club Catania.[12] His period as Catania boss however lasted only three months, as he resigned on 19 December following a string a poor results and strained relationship with the club's board.[13]

On 29 September 2015, he was appointed manager of newly promoted Serie A side Carpi.[14]

On 3 November 2015, it was announced that he had been relieved of his duties and he was replaced by Fabrizio Castori - the man he had initially replaced - as first team coach [15]