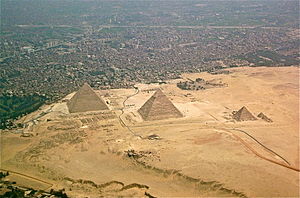 From north to south: parts of the city of Giza, the Giza Necropolis, and part of the Giza plateau

The Giza Plateau (Arabic: جيزة بلاتي‎‎) is a plateau that is located in Giza, Egypt. The famous Giza Necropolis is located in this geographical area, which is characterized by a sandy, desert climate and terrain with little vegetation.

Modern Giza's layout is accessed by two main roads. The first from the north leads to Khufu's pyramids and the other road leads near the Sphinx's forecourt from the east. They cross the Nile River from the east bank and follow the causeway westward. Dominating the plateau and running in a southwest diagonal through the site are the three pyramids of the pharaohs Khufu, Khafra, and Menkaura. The northernmost, and the largest, one belongs to Khufu. Khafra's pyramid is built precisely on a southwest diagonal to his father's pyramid, as well as having been built on higher ground to create the illusion of being bigger. The pyramid of Menkaura is much smaller and is not aligned along the same diagonal line as the other two pyramids.[1]

Since the Egyptian Revolution of 2011 looting has been taking place at the site.[2]