The Gladstone Branch (also known as the Gladstone Line) is a branch of New Jersey Transit's Morris and Essex Lines. The Gladstone Branch primarily serves commuter trains; freight service is no longer operated. Out of 24 inbound and 27 outbound daily weekday trains, 2 peak-hour inbound and 2 peak-hour outbound trains use the Kearny Connection (opened June 10, 1996) to New York Penn Station, bypassing Secaucus Junction except for one inbound train.[1] The rest go to Hoboken Terminal. The part of the line west of Summit is single-tracked with passing sidings at Murray Hill, Stirling, and west of Far Hills and operates in peak-direction only on weekday peak hours, except for some service operating reverse-peak from Murray Hill in the PM peak. Bernardsville also has a passing siding, but is no longer used, as the Far Hills one is currently in use. On weekends the line operates Gladstone-Summit service hourly along the branch.

The branch received severe damage from Hurricane Sandy on October 29–30, 2012, especially to the catenary and signal system, causing a suspension of service for one month. High winds brought down five tall catenary poles (whose replacements had to be custom-made), approximately five miles of catenary, and 49 trees across the tracks. Gladstone service resumed on Monday, December 3 with electric Midtown Direct trains to Penn Station and diesel-powered trains to Hoboken; full electric operation was impractical until substation damage near Hoboken was repaired in early 2013.[2][3][4] 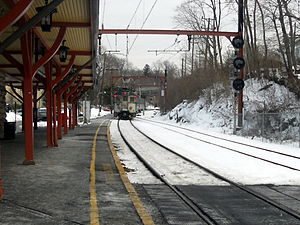 The only part of the New Jersey West Line Railroad that was completed was from Summit west to Bernardsville. The New Jersey West Line Railroad was dissolved in 1878 and the assets were sold off. The Summit to Bernardsville line was then purchased by the Passaic and Delaware Railroad. The Delaware Lackawanna and Western Railroad (DL&W) leased the line on November 1, 1882 as a branch of the Morris and Essex. The Passaic and Delaware Extension Railroad was chartered in 1890 and opened later that year, extending the line to its current terminus in Gladstone, New Jersey.

Most service is provided by Arrow III electric cars built by General Electric and Avco in 1978. The two weekday round trips to New York use Bombardier MultiLevel Coach or Comet coaches powered by ALP-46, ALP-45DP Electric Mode locomotives, since Arrows cannot make the voltage change at the Kearny Connection. In the months following Hurricane Sandy, service to Hoboken used Comet trains powered by ALP-45DP locomotives.

At the time of NJT acquisition, freight service was operated by the Consolidated Rail Corporation. Upon the breakup of that company, the Norfolk Southern Railway inherited the business. Customers on the line dwindled, and the last customer, the Reheis Chemical Company, was bought out by the General Chemical Company and planned to close down in 2008. The apparent last freight train made its run on November 7, 2008; however, seven months later the facility began receiving shipments again, on June 19, 2009. Although this industry is east of the Berkeley Heights station, the freight trains actually operate as far west as Stirling, where the engine uses the siding to run around the train to reverse direction.

For the stations between Newark – Broad Street and Summit, see Morristown Line#Stations.