From Infogalactic: the planetary knowledge core
(Redirected from Gladstone Park, Chicago)
Jump to: navigation, search
This article is about the neighborhood. For the park, see Jefferson Park (Chicago).

Jefferson Park is one of 77 well-defined community areas located on the Northwest Side of Chicago, USA. The neighborhood of Jefferson Park occupies a larger swath of territory, as shown on this map. 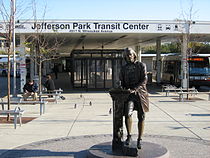 Monument of Thomas Jefferson in front of the Jefferson Park Transit Center.

Settlement in the vicinity of Jefferson Park began in the 1830s with John Kinzie Clark and Elijah Wentworth, whose claim was near what is now the Jefferson Park Metra Station, where he operated a tavern and inn. The tiny settlement of traders, hunters, and farmers consisted of simple one and two room log cabins until Abram Gale, for whom Gale Street is named, built the first frame house in Jefferson. Jefferson Park became the hub of an independent township that was incorporated at the nearby Dickinson Tavern as Jefferson Township in 1850 until annexed by the city of Chicago in 1889. The area was once home to a significant population of Volga Germans, and one of the area's one time local landmarks was a local apartment buildings in the vicinity of the park along Higgins Avenue dubbed by locals as "the Russian Hotel".

Jefferson Park is also, appropriately enough, home to the The Northwest Chicago Historical Society which is dedicated to preserve the area's rich history as well as most historical events and lectures.

Jefferson Park, the park, with a view of the field house designed by Clarence Hatzfeld

Jefferson Park is a 7-acre (28,000 m2) park operated by the Chicago Park District. The park, which is listed on the National Register of Historic Places is located on the site of the Esdohr Farm. 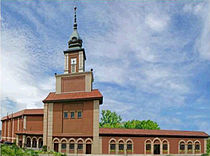 The Copernicus Center, supported by the Copernicus Foundation is located in Jefferson Park. It houses the former Gateway Theater, as well as a number of other event venues and meeting spaces.

The Taste of Polonia has brought some of the nation's most prominent political figures to Jefferson Park to woo the support of Chicago's Polish community. President George H.W. Bush hosted the festival in 1992 and in 2000, future Vice-President Dick Cheney as well as Tipper Gore, and Hadassah Lieberman made an appearance.[3] Vice-President Cheney's presence was particularly notorious with coverage in the New York Times of his lively antics which included dancing the polka, serving attendees kielbasa with stuffed cabbage and addressing a cheering crowd by shouting the Polish phrase Sto Lat.[4]

Jefferson Park has long been one of Chicago's transportation hubs, earning the neighborhood the nickname as "The Gateway to Chicago".[5] 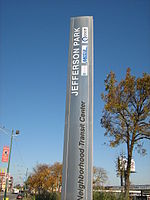 The neighborhood is serviced by a Blue Line station in the Kennedy Expressway at the intersection of Milwaukee and Avondale, less than three blocks away from the Copernicus Center and the historic Jefferson Park Congregational Church. The Union Pacific / Northwest Line also provides service to Jefferson Park. In 2005, a monument to Thomas Jefferson was placed along the station's entrance along Milwaukee Avenue. 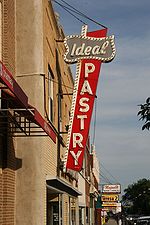 Jefferson Park is a predominantly middle-class neighborhood of people coming from a variety of diverse backgrounds. Like many neighborhoods on the Northwest Side of Chicago the neighborhood has a heavy Polish-American presence, and is home to the Copernicus Foundation, the Polish parish of St. Constance, as well as a host of other Polish-American organizations, institutions and businesses.

Jefferson Park is also known for having a very high number of resident city and county workers. The area is filled with the homes of Chicago Public School teachers and staff, Chicago Police Department, Chicago Fire Department as well as Cook County Sheriff officers and staff.

Gladstone Park is a neighborhood in the northern section of the Jefferson Park community area of Chicago. It is centered at the large and confusing intersection of Northwest Highway and Central, Milwaukee, and Foster Avenues. The Kennedy Expressway runs nearby as well and has an entrance from Foster Avenue. The park for which the neighborhood is named is located a few blocks to the northwest between Northwest Highway and Milwaukee, on Menard Avenue.

The numerous examples of homes in the Dutch Colonial style has led to the area's nickname as "Little Rotterdam", an allusion to the Dutch city of Rotterdam

Gladstone Park has its own stop on the Union Pacific / Northwest Line.