Glanum (Hellenistic Γλανόν,[1] as well as Glano,[2] Calum,[3] Clano,[4] Clanum, Glanu, Glano) was an oppidum, or fortified town in present day Provence, founded by a Celto-Ligurian people called the Salyens in the 6th century BCE.[5] It became officially a Roman city in 27 BCE and was abandoned in 260 AD. It is located on the flanks of the Alpilles, a range of mountains in the Bouches-du-Rhône département, about 20 km (12 mi) south of the modern city of Avignon, and a kilometre south of Saint-Rémy-de-Provence. It is particularly known for two well-preserved Roman monuments of the 1st century B.C., known as les Antiques, a mausoleum and a triumphal arch (the oldest in France).

File:Hellenic fountain in Glanum.JPG
A circular fountain in the Hellenic style, built near the old Agora, or public square (2nd-1st century BC).

Between the 4h and 2nd centuries BC, the Salyens, the largest of the Celto-Ligurian tribes in Provence, built a rampart of stones on the peaks that surrounded the valley of Notre_Dame-de-Laval, and constructed an oppidum, or fortified town, around the spring in the valley, which was known for its healing powers. A shrine was built at the spring to Glanis, a Celtic god. The town grew, and a second wall was built in the 2nd century BC.[6]

The town had a strong Celtic identity, shown by the names of the residents (Vrittakos, Eporix, Litumaros); by the names of the local gods (Glanis and his companions, the Glanicae, (similar to the Roman Matres); and the goddesses Rosmerta and Epona); by the statues and pottery; by the customs, such as displaying the severed heads of enemies at the city gate; and by the cooking utensils found in the ruins, which showed that the people of Glanis boiled their food in pots, rather than frying it in pans like other Mediterranean tribes.[7]

The people of Glanum were in early contact with the Greek colony of Massalia, present day Marseille, which had been founded in about 600 BC. The contact influenced the architecture and art of Glanum- villas were built in the Hellenic style. But by the 2nd century BC conflicts and wars arose between the Salyens and the Greeks of Marseille, who not having a powerful army, called upon the assistance of their Roman allies. In 125 BC the Salyens were defeated by the army of the Roman consul Marcus Fulvius Flaccus, and the following year decisively defeated by C. Sextus Calvinus. Many of the old monuments of Glanum were destroyed.

Due to its commercially useful location on the Via Domitia, and the attraction of its healing spring, the town prospered again. The city produced its own silver coins and built new monuments. The prosperity lasted until 90 BC when the Salyens again rebelled against Rome. The public buildings of Glanum were again destroyed. The rebellion was crushed this time by the Consul Caecilius, and the remains of the main buildings demolished and replaced by more modest structures.[8]

File:Glanum Roman Road.JPG
A Roman road paved with blocks of stone ran from north to south through the center of Glanum. Under the street was a water conduit which carried away rainwater and sewage.

In 49 BC Julius Caesar captured Marseille, and after a period of destructive civil wars, the Romanization of Provence and Glanum began.

In 27 BC the Emperor Augustus created the Roman province of Gallia Narbonensis, and in this province Glanum was given the title of Oppidum Latinum, which gave residents the civil and political status of citizens of Rome. A triumphal arch was built outside the town between 10 and 25 BC, near the end of the reign of Augustus, (the first such arch to be built in Gaul), as well as an impressive mausoleum of the Julii family, both still standing.

In the 1st century BC, under the Romans, the city built a new forum, temples, and a curved stone arch dam, Glanum Dam, the oldest known dam of its kind,[9][10] and an aqueduct, which supplied water for the towns fountains and public baths.

Glanum was not as prosperous as the Roman colonies of Arles, Avignon and Cavaillon, but by the 2nd century AD it was wealthy enough to build impressive shrines to the Emperors, to enlarge the forum, and to have extensive baths and other public buildings clad in marble.

Glanum did not survive the collapse of the Roman Empire. The town was overrun and destroyed by the Alamanni in 260 AD and subsequently abandoned, its inhabitants moving a short distance north into the plain to found a city that eventually became modern day Saint-Rémy-de-Provence.

After its abandonment Glanum became a source of stone and other building materials for Saint-Remy. Since the Roman system of drains and sewers was not maintained, the ruins became flooded and covered with mud and sediment. The mausoleum and triumphal arch, together known as "Les Antiques," were famous, and were visited by King Charles IX, who had the surroundings cleaned up and maintained. Some excavations were made around the monuments as early as the 16th and 17th centuries, finding sculptures and coins, and by the Marquis de Lagoy in the Vallons-de-Notre-Dame in the 19th century.

The first systematic excavations began in 1921, directed by the architect of historic monuments, Jules Foremigé. From 1921 until 1941, the archeologist Pierre LeBrun worked on the site, discovering the baths, the basilica, and the residences of the northern part of the town. From 1928 to 1933, Henri Roland (1887–1970) worked on the Iron Age sanctuary, to the south. From 1942 until 1969, Roland took over the work and excavated the area from the forum to the sanctuary. The objects he discovered are on display today at the Hotel de Sade in nearby Saint-Remy. New excavation and exploration work began in 1982, devoted mainly to the preservation of the site, and to exploring beneath sites already discovered for older works.[11]

Mausoleum of the Julii

The Mausoleum of the Julii, located across the Via Domitia, to the north of, and just outside the city entrance, dates to about 40 BCE, and is one of the best preserved mausoleums of the Roman era.[12]

A dedication is carved on the architrave of the building facing the old Roman road, which reads:

It is believed that the mausoleum was the tomb of the mother and father of the three Julii brothers, and that the father, for military or civil service, received Roman citizenship and the privilege of bearing the name of the Julii, one of the most distinguished families in Rome.[12]

The mausoleum is built in three stages. The upper stage, or tholos, is a circular chapel with Corinthian columns. It contains two statues wearing togas, presumably the father and grandfather of the Julii. (The heads of the statues were lost at an earlier date, and replaced in the 18th century). The conical roof is decorated with carved fish scales, traditional for Roman mausoleums. The frieze beneath the conical roof is decorated with a rinceau featuring carvings of acanthus leaves, used in Roman mortuary architecture to represent eternal rebirth.

The middle stage, or quadrifons, is an arch with four bays. The archivoltes, or curved bands of decoration on the tops of the arches, also have acanthus leaves. At the top of each arch is the carved head of a gorgon, the traditional protector of Roman tombs.

The frieze at the top of the quadrifons is decorated with carvings of tritons, carrying the disk of the sun, and with sea monsters.

The lowest part of the mausoleum is decorated with carved garlands of vegetation, theater masks and cupids or putti, and with mythical or legendary scenes.

The Triumphal Arch of Glanum 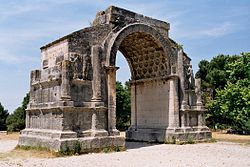 The triumphal arch stood just outside the northern gate of the city, next to the mausoleum and was the visible symbol of Roman power and authority. It was built near the end of the reign of Augustus Caesar (who died in 14 AD). The upper portion of the arch, including the inscription, are missing.

The sculptures decorating the arch illustrated both the civilization of Rome and the dire fate of her enemies.

File:Bouleuterion in Glanum, 20101-07-12.jpg
The Bouleuterion, or open-air meeting place for notables (2nd-1st centuries BC), which later became the Roman Curia.

The earliest monuments discovered in Glanum were built by the Salyens in the late 1st and early 2nd centuries BC and were strongly influenced by the Hellenic style of the nearby Greek colony of Marseille. They included a large building around a trapezoidal peristyle, or courtyard surrounded by columns; and a sacred well, or dromos, next to a small temple in the Tuscan style.

The first Roman forum in Glanum was built around 20 B.C., at about the time that Glanum was given the title of oppidum latinum.

File:Glanum Monumental Fountain.JPG
Vestige of the Roman fountain near the forum, (about 20 BC).

The second Roman forum, built between the 1st and 3rd centuries AD, was the central market, business place, place of justice and site of official religious rituals. A large open space was enclosed on two sides by porticos of columns. On the southern side was a semi-circular excedre, while on the north was the basilica, the large hall that was the palace of justice and seat of government. The basilica was 47 by 24 meters in size, supported by 24 large columns. The facade has disappeared, but the back wall and side walls still exist. Behind the basilica was the curia, where a statue of the Emperor was placed in a niche in the wall. In the center was a square room which served as a tribunal and as the chapel of the cult of the Emperor.[15]

The residential quarter and the public baths

File:Saint-Rémy-de-Provence - Glanum sculpture.jpg
Mask which spouted water into the swimming pool of the public baths (1st century BC).

The northern part of Glanum, at the bottom of the sloping site, was the residential quarter: the site of villas and of the extensive public baths. The baths were the center of social life, and helped serve to Romanize the local population.

File:Glanum Maison des Antes.JPG
The House of the Antae, a Hellenistic-style residence with a peristyle of Tuscan columns and a basin to capture rainwater.

The Valley of the Sacred Spring

The sacred spring of Glanum is located at the southern and highest part of the town. The valley was closed by a stone wall, built in the late 2nd or early 1st centuries BC. This wall had a gate large enough for chariots, a square tower, and a smaller gate for pedestrians. To the left and right of the gate are vestiges of the older walls, dating from between the 6th and 3rd centuries BC, making a rampart 16 meters high.

File:Saint-Rémy-de-Provence - Glanum 25.jpg
The sacred spring of Glanum
File:Glanistelae.jpg
Votive stones devoted to Hercules, guardian of the spring, and the chapel of Hercules.

In Robert Holdstock's fantasy novel Ancient Echoes, Glanum is a sentient, living, moving city which eventually settles at its present site in Provence.