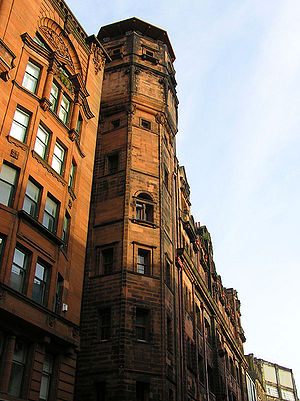 The Herald building in Glasgow

The newspaper was founded by John Mennons in January 1783 as a weekly publication called the Glasgow Advertiser. An early scoop for the paper was official news of the treaties of Versailles, which reached Mennons via the Lord Provost of Glasgow just as the first edition was being compiled. It was, however, only carried on the back page.[5][6]

In 1802, Mennons sold the newspaper to Benjamin Mathie and Dr James McNayr, former owner of the Glasgow Courier. Mennons' son Thomas retained an interest in the company.[2] The new owners changed the name to The Herald and Advertiser and Commercial Chronicle in 1803. In 1805 the name changed this time to The Glasgow Herald when Thomas Mennons severed his ties to the paper.[7]

It was bought by Sir Hugh Fraser who sold it ten years later to the Lonrho empire.[3] In 1895 publication moved to a building in Mitchell Street. In 1980 it moved to offices in Albion Street in Glasgow into the former Scottish Daily Express building.[citation needed]

The newspaper changed its name to The Herald on 3 February 1992.[8] That same year the title was bought by Caledonia Newspaper Publishing & Glasgow. In 1996 was purchased by Scottish Television (later called the Scottish Media Group).[3] As of 2013 the newspaper along with its related publications, the Evening Times and Sunday Herald, were owned by the Newsquest media group.[3]

Prominent columnists writing on the paper include Alison Rowat, Collete Douglas-Home, Ruth Wishart, Anne Johnstone, Ian Bell and Iain Macwhirter. It publishes the quarterly Scottish Review of Books as a supplement in the Saturday Herald.

It is currently printed at Cambuslang, just south east of Glasgow.[9] The paper is published Monday to Saturday in Glasgow and as of 2015 it had an audited circulation of 34,379.[1]

The newspaper backed a 'No' vote in the referendum on Scottish independence.[10] The accompanying headline stated, "The Herald's view: we back staying within UK, but only if there's more far-reaching further devolution".