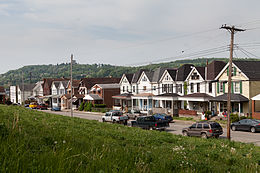 A row of houses on the west side of the 800 block of Ohio Avenue
Error creating thumbnail: File missing
Location in Allegheny County and state of Pennsylvania

Glassport is a borough in Allegheny County, Pennsylvania, United States, approximately 10 miles (16 km) south of Pittsburgh and the confluence of the Monongahela and Allegheny rivers where they form the Ohio River. Glassport lies along the east side of the Monongahela River in the "Mon valley", where many blue-collar municipalities have suffered severe economic decline in the wake of the loss of steel-making throughout the Greater Pittsburgh area. In 1910, the population of Glassport was 5,540. By 1940, it had risen to 8,748, but has since declined to 4,483 as of the 2010 census.[1]

The mayor of Glassport is Rosemary Bradley. Mayor Bradley's term in office began in 2014.[2]

Glassport is located at Lua error in Module:Coordinates at line 668: callParserFunction: function "#coordinates" was not found..[3] 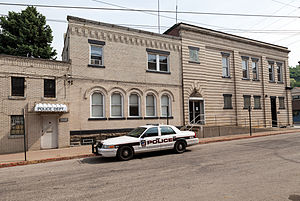 Before Glassport was its own borough, the territory was part of Elizabeth Twp., then of Lincoln Twp., then Port Vue, PA. In 1902, it became its own separate municipality, comprising 1.52 square miles.

Glassport received its name after the Glassport Land Company.

The United States Glass Company was located near the Monongahela River on Seventh Street. The company specialized in "pressed glass," tableware, and other glass products made from molds. Unfortunately, in 1963 the United States Glass Company was damaged by a tornado, and their 80-foot water tower collapsed through the building's roof. When the high winds did this, all the furnaces shut down and the liquid glass cooled and hardened. Afterwards there was left a 250-ton block of solid glass, making any plans to re-build too costly.