The Gleiwitz incident (German: Überfall auf den Sender Gleiwitz; Polish: Prowokacja gliwicka) was a false flag operation by Nazi forces posing as Poles on 31 August 1939, against the German radio station Sender Gleiwitz in Gleiwitz, Upper Silesia, Germany (since 1945: Gliwice, Poland) on the eve of World War II in Europe. The goal was to use the staged attack as a pretext for invading Poland. This provocation was the best-known of several actions in Operation Himmler, a series of unconventional operations undertaken by the SS in order to serve specific propaganda goals of Nazi Germany at the outbreak of the war. It was intended to create the appearance of Polish aggression against Germany in order to justify the subsequent invasion of Poland.

Alfred Naujocks, who organized and led the Gleiwitz operation on the orders of the Gestapo

Much of what is known about the Gleiwitz incident comes from the affidavit of SS-Sturmbannführer Alfred Naujocks at the Nuremberg Trials. In his testimony, he stated that he organized the incident under orders from Reinhard Heydrich and Heinrich Müller, chief of the Gestapo.[1]

On the night of 31 August 1939, a small group of German operatives, dressed in Polish uniforms and led by Naujocks,[2] seized the Gleiwitz station and broadcast a short anti-German message in Polish (sources vary on the content of the message). The Germans' goal was to make the attack and the broadcast look like the work of anti-German Polish saboteurs.[2][3] 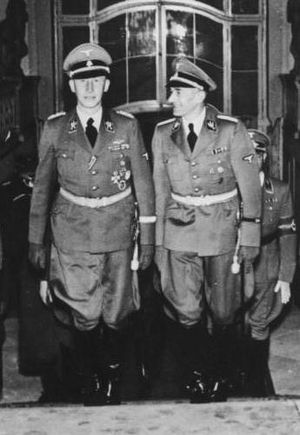 Heydrich (left) with Karl Hermann Frank at Prague Castle in 1941

To make the attack seem more convincing, the Germans used human props to pass them off as Polish attackers. They murdered Franciszek Honiok, a 43-year-old unmarried German Silesian Catholic farmer, known for sympathizing with the Poles. He had been arrested the previous day by the Gestapo. He was dressed to look like a saboteur; then killed by lethal injection, given gunshot wounds, and left dead at the scene, so that he appeared to have been killed while attacking the station. His corpse was subsequently presented as proof of the attack to the police and press.[4]

In addition to Honiok, several prisoners from the Dachau concentration camp[2] were drugged, shot dead on the site, and had their faces smashed up to make identification impossible.[3][5] The Germans referred to them by the code phrase "Konserve" ("canned goods"). For this reason, some sources incorrectly refer to the incident as "Operation Canned Goods".[6] In an oral testimony at the trials, Erwin von Lahousen stated that his division of the Abwehr was one of two that were given the task of providing Polish uniforms, equipment and identification cards, and that he was later told by Wilhelm Canaris that people from concentration camps had been disguised in these uniforms and ordered to attack the radio stations.[7] 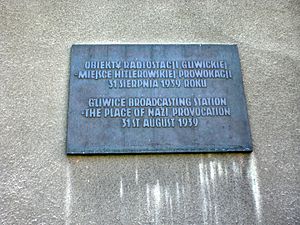 Plaque on site commemorating the incident

The Gleiwitz incident was a part of a larger operation, carried out by Abwehr and SS forces.[3] At the same time as the Gleiwitz attack, there were other incidents orchestrated by Germany along the Polish-German border, such as a house torching in the Polish Corridor and spurious propaganda output. The entire project, dubbed Operation Himmler and comprising a number of incidents,[8] was intended to give the appearance of Polish aggression against Germany.[6]

For months before the 1939 invasion, German newspapers and politicians, including Adolf Hitler, accused Polish authorities of organizing or tolerating violent ethnic cleansing of ethnic Germans living in Poland.[8][9]

On the day following the Gleiwitz attack, 1 September 1939, Germany launched the Fall Weiss operation – the invasion of Poland – initiating World War II in Europe. On the same day, in a speech in the Reichstag, Hitler cited the border incidents, with three of them called very serious, as justification for Germany's invasion of Poland.[8] Just a few days earlier, on 22 August, he had told his generals, "I will provide a propagandistic casus belli. Its credibility doesn't matter. The victor will not be asked whether he told the truth."[3][6]

American correspondents were summoned to the scene the next day[3] but no neutral parties were allowed to investigate the incident in detail and the international public was skeptical of the German version of the incident.[10]

There have been several adaptations of the incident in cinema. Der Fall Gleiwitz, direction: Gerhard Klein (1961), DEFA studios (The Gleiwitz Case; English subtitles), is an East German film that reconstructs the events.[11] Operacja Himmler (1979) is a Polish film that covers the events.[12] Both Hitler's SS: Portrait in Evil, direction: Jim Goddard (1985);[13] and Die Blechtrommel briefly include the incident.[14]

It was also mentioned in a video game; Codename Panzers, which stirred up controversy in Poland where the game was briefly discussed in Polish media as anti-Polish falsification of history, before the issue was cleared up as a case of poor reporting.[15]