From Infogalactic: the planetary knowledge core
Jump to: navigation, search
This article is about the fictional humanoid type of creature. For the garden ornament, see Garden gnome. For other uses, see Gnome (disambiguation). 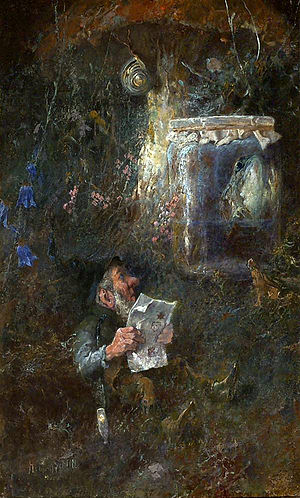 A gnome /ˈnoʊm/[1] is a diminutive spirit in Renaissance magic and alchemy, first introduced by Paracelsus in the 16th century and later adopted by more recent authors including those of modern fantasy literature. Its characteristics have been reinterpreted to suit the needs of various story tellers, but it is typically said to be a small, humanoid creature that lives underground.[2]

The word comes from Renaissance Latin gnomus, which first appears in the works of 16th century Swiss alchemist Paracelsus, possibly deriving the term from Latin gēnomos (itself representing a Greek γη-νομος, literally "earth-dweller"). In this case, the omission of the ē is, as the Oxford English Dictionary (OED) calls it, a blunder. Alternatively, the term may be an original invention of Paracelsus.

Paracelsus uses Gnomi as a synonym of Pygmæi,[3] and classifies them as earth elementals. He describes them as two spans high, very reluctant to interact with humans, and able to move through solid earth as easily as humans move through air.[4][5]

The chthonic, or earth-dwelling, spirit has precedents in numerous ancient and medieval mythologies, often guarding mines and precious underground treasures, notably in the Germanic dwarves and the Greek Chalybes, Telchines or Dactyls.[2]

In Romanticism and modern fairy tales

The English word is attested from the early 18th century. Gnomes are used in Alexander Pope's "The Rape of the Lock". The creatures from this mock-epic are small, celestial creatures which were prudish women in their past-lives, and now spend all of eternity looking out for prudish women (in parallel to the guardian angels in Catholic belief). Other uses of the term gnome remain obscure until the early 19th century, when it is taken up by authors of Romanticist collections of fairy tales and becomes mostly synonymous with the older word goblin.

In 19th century fiction, the chthonic gnome became a sort of antithesis to the more airy or luminous fairy. Nathaniel Hawthorne in Twice-Told Tales (1837) contrasts the two in "Small enough to be king of the fairies, and ugly enough to be king of the gnomes" (cited after OED). Similarly, gnomes are contrasted to elves, as in William Cullen Bryant's Little People of the Snow (1877), which has "let us have a tale of elves that ride by night, with jingling reins, or gnomes of the mine" (cited after OED).

One of the first movements in Mussorgsky's 1874 work Pictures at an Exhibition, named "Gnomus" (Latin for "The Gnome"), is written to sound as if a gnome is moving about, his movements constantly changing in speed.

Franz Hartmann in 1895 satirized materialism in an allegorical tale entitled Unter den Gnomen im Untersberg. The English translation appeared in 1896 as Among the Gnomes: An Occult Tale of Adventure in the Untersberg. In this story, the Gnomes are still clearly subterranean creatures, guarding treasures of gold within the Untersberg mountain.

As a figure of 19th century fairy tales, the term gnome became largely synonymous with other terms for "little people" by the 20th century, such as goblin, brownie, kobold, leprechaun, Heinzelmännchen and other instances of the "domestic spirit" type, losing its strict association with earth or the underground world. 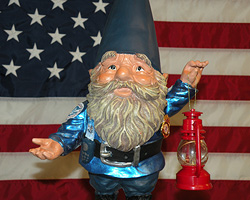 The TSA gnome at Nome Airport

The name gnome has been used in the Fantasy genre, typically in a cunning role, e.g. as an inventor.[7]

In L. Frank Baum's Oz series, the Nomes (so spelled), especially their king, are the chief adversaries of the Oz people. Ruth Plumly Thompson, who continued the series after Baum's death, reverted to the traditional spelling.

In C. S. Lewis's The Chronicles of Narnia, gnomes, or "Earthmen" as they are sometimes called, live in the Underland, a series of subterranean caverns. Unlike the traditional, more humanlike gnomes, they can have a wide variety of physical features and skin colours. They are used as slaves by the Lady of the Green Kirtle.

J. R. R. Tolkien, in the legendarium surrounding his Elves, uses "Gnomes" as a name of the Noldor, the most gifted and technologically minded of his elvish races, in conscious exploitation of the similarity with gnomic. Gnomes is thus Tolkien's English loan-translation of Quenya Noldor, "those with knowledge". In The Father Christmas Letters, which Tolkien wrote for his children, Red Gnomes are helpful creatures who come from Norway to the North Pole to assist Father Christmas and his Elves in fighting the wicked Goblins.

The Dutch books Gnomes and The Secret Book of Gnomes, written by Wil Huygen, deal with gnomes living together in harmony. These same books are the basis for a made-for-TV animated film and the Spanish-animated series The World of David the Gnome (as well as the spin-off Wisdom of the Gnomes).

In Terry Brooks' Shannara Series gnomes are an offshoot race created after the Great Wars. There are several distinctive classes of gnomes. Gnomes are the smallest race. In The Sword of Shannara they are considered to be tribal and warlike, the one race that can be the most easily subverted to an evil cause. This is evidenced by their allegiance to the Warlock Lord in The Sword of Shannara and to the Mord Wraiths in The Wishsong of Shannara.

BB's The Little Grey Men (1942) is a story of the last gnomes in England, little wild men who live by hunting and fishing. 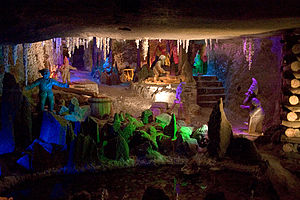 Gnome garden at the Wieliczka Salt Mine

After World War II (with early references, in ironic use, from the late 1930s) the diminutive figurines introduced as lawn ornaments during the 19th century came to be known as garden gnomes. The image of the gnome changed further during the 1960s to 1970s, when the first plastic garden gnomes were manufactured. These gnomes followed the style of the 1937 depiction of the seven dwarves in Snow White and the Seven Dwarfs by Disney. This "Disneyfied" image of the gnome was built upon by the illustrated children's book classic The Secret Book of Gnomes (1976), in the original Dutch Leven en werken van de Kabouter. Garden gnomes share a resemblance to the Scandinavian tomte and nisse, and the Swedish term "tomte" can be translated to "gnome" in English.

Garden gnome liberationists such as the Gnome Liberation Front were introduced in France in 1997. They claim that Garden Gnomes deserve the same freedom that any other living creature would have. They are noted to have stolen hundreds of gnomes.[8][9]

Gnome parades are held annually at Atlanta's Inman Park Festival.[10] Numerous one-off gnome parades have been held, including in Savannah, Georgia (April 2012)[11] and Cleveland, Ohio (May 2011).[12]