From Infogalactic: the planetary knowledge core
Jump to: navigation, search
File:Soccer goalkeeper.jpg
A goalkeeper in action.

Goalkeeper, often shortened to keeper or goalie, is one of the major positions of association football. It is the most specialised position in the sport. The goalkeeper's primary role is to prevent the opposing team from successfully moving the ball over the defended goal-line (between the posts and under the crossbar). This is accomplished by the goalkeeper moving into the path of the ball and either catching it or directing it away from the vicinity of the goal line. Within the penalty area goalkeepers are able to use their hands, making them (outside of throw-ins) the only players on the field permitted to handle the ball. Goalkeepers usually perform goal kicks, and also give commands to their defence during corner kicks, direct and indirect free kicks, and marking. Goalkeepers play an important role in directing on field strategy as they have an unrestricted view of the entire pitch, giving them a unique perspective on play development. If an attacker on the opposing team obstructs the keeper from catching or saving the ball, for example, in a corner, it will normally be a free kick.

Goalkeepers often have longer playing careers than outfield players, many not retiring until their late thirties or early forties. This can be explained by noting that goalkeepers play a less physically demanding position that requires significantly less running. For example, Peter Shilton played for 31 years between 1966 and 1997 before retiring at the age of 47.

The squad number for a goalkeeper is generally number 1. Although this is common, some goalkeepers now wear other numbers when in goal. 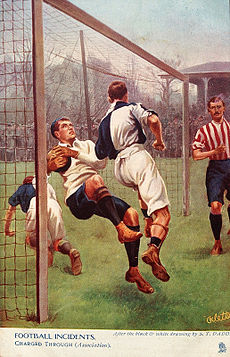 A goalkeeper being charged by a rival player (1905).

Association football, like many sports, has experienced many changes in tactics resulting in the generation and elimination of different positions. Goalkeeper is the only position that is certain to have existed since the codification of the sport. Even in the early days of organised football, when systems were limited or non-existent and the main idea was for all players to attack and defend, teams had a designated member to play as the goalkeeper.

The earliest account of football teams with player positions comes from Richard Mulcaster in 1581 and does not specify goalkeepers. The earliest specific reference to keeping goal comes from Cornish Hurling in 1602. According to Carew: "they pitch two bushes in the ground, some eight or ten foot asunder; and directly against them, ten or twelve score off, other twayne in like distance, which they term their Goals. One of these is appointed by lots, to the one side, and the other to his adverse party. There is assigned for their guard, a couple of their best stopping Hurlers".[1] Other references to scoring goals begin in English literature in the early 16th century; for example, in John Day's play The Blind Beggar of Bethnal Green (performed circa 1600; published 1659): "I'll play a gole at camp-ball" (an extremely violent variety of football, popular in East Anglia). Similarly, in a 1613 poem, Michael Drayton refers to "when the Ball to throw, And drive it to the Gole, in squadrons forth they goe". It seems inevitable that wherever a game has evolved goals, some form of goalkeeping must also be developed. David Wedderburn refers to what has been translated from Latin as to "keep goal" in 1633, though this does not necessarily imply a fixed goalkeeper position.

Initially, goalkeepers typically played between the goalposts and had limited mobility, except when trying to save opposition shots. Throughout the years, goalkeeping has evolved, due to the changes in systems of play, to be a more active role. Goalkeeper is the only position in which you can use your hands (other than during throw-ins). The original Laws of the Game permitted goalkeepers to handle the ball anywhere in their half of the pitch. This was revised in 1912, restricting use of the hands by the goalkeeper to the penalty area.

In 1992, the International Football Association Board made changes in the laws of the game that affected goalkeepers – notably the back-pass rule,[2] which prohibits goalkeepers from handling the ball when receiving a deliberate pass from a teammate that is made with their feet. This rule change was made to discourage time-wasting and overly defensive play after the 1990 FIFA World Cup which was described as exceedingly dull, rife with back-passing and goalkeepers holding the ball. Also, goalkeepers would frequently drop the ball and dribble it around, only to pick it up again once opponents came closer to put them under pressure, a typical time-wasting technique. Therefore, another rule was introduced at the same time as the back-pass rule. This rule prohibits the goalkeeper from handling the ball again once he has released it for play; an offence results in an indirect free kick to the opposition. 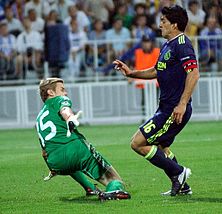 Goalkeepers routinely perform extension dives. To execute this, they push off the ground with the foot nearest to the ball, launching themselves into a horizontal position. At this point, the ball may be caught or pushed away. In the latter case, a good goalkeeper will attempt to ensure that the rebound cannot be taken by a player of the opposite team, although this is not always possible. 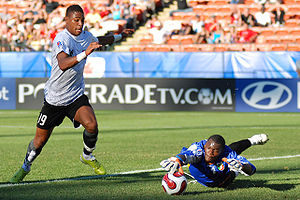 A goalkeeper making a save

The tactical responsibilities of goalkeepers include:

Although goalkeepers have special privileges, including the ability to handle the ball in the penalty area, they are otherwise subject to the same rules as any other player.

Goalkeepers in playmaking and attack 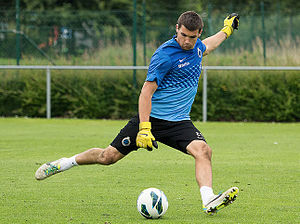 Goalkeepers are not required to stay in the penalty area; they may get involved in play anywhere on the pitch, and it is common for them to act as an additional defender during certain passages of the game, such as Manuel Neuer, who has been described as a "sweeper keeper", due to his ball control, distribution, and speed when rushing off his line to anticipate opposing forwards.[4][5] Goalkeepers with a long throwing range or accurate long-distance kicks may be able to quickly create attacking positions for a team and generate goal-scoring chances from defensive situations, a tactic known as the long ball.

Some goalkeepers have scored goals. This most commonly occurs where a goalkeeper has rushed up to the opposite end of the pitch to give his team a numerical advantage in attack. This leaves the goalkeeper's goal undefended. As such, it is normally only done late in a game at set-pieces where the consequences of scoring far outweigh those of conceding a further goal, such as for a team trailing in a knock-out tournament.

Some goalkeepers, such as Rogério Ceni and José Luis Chilavert, may also be expert set-piece takers. These players may take their team's attacking free kicks and even penalties. Ceni, São Paulo's long-time custodian, has scored 100 goals in his career, more than many outfield players.[6][7] 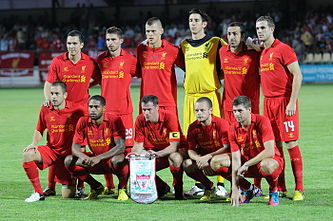 Liverpool F.C. team photo prior to their UEFA Europa League clash against FC Gomel. Note the differing attire of goalkeeper Brad Jones with that of the rest of his teammates.

Goalkeepers must wear kit that distinguishes them clearly from other players and match officials, as this is all that the FIFA Laws of the Game require. Some goalkeepers have received recognition for their match attire, like Lev Yashin of the Soviet Union, who was nicknamed the "Black Spider" for his distinctive all-black outfit; Klaus Lindenberger of Austria, who designed his own variation of a clown's costume; and Jorge Campos of Mexico, who was popular for his colourful attire.

Most goalkeepers also wear gloves to improve their grip on the ball, and to protect themselves from injury. Some gloves now include rigid plastic spines down each finger to help prevent injuries such as jammed and sprained fingers. Though gloves are not mandatory attire, it is uncommon for goalkeepers to opt against them due to the advantages they offer. At UEFA Euro 2004, Portuguese goalkeeper Ricardo famously took off his gloves for the quarter-final penalty shoot-out against England. He then went on to score a penalty in sudden death before saving Darius Vassell's penalty to win it for the Portuguese.

Lower and upper extremity injuries are very common and vary from cartilage tears, anterior cruciate ligaments (ACL), and knee sprains. In general, goalkeepers can incur any injury that their outfield counterparts are also vulnerable to. The main exception to this guideline is that goalkeepers, as they run much less than outfield players, very rarely fall victim to fatigue-related injuries, such as leg cramps, pulled hamstrings, and dehydration.[8] 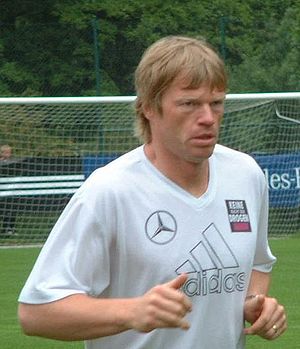 Oliver Kahn, the first and only goalkeeper to win the FIFA World Cup Golden Ball award. 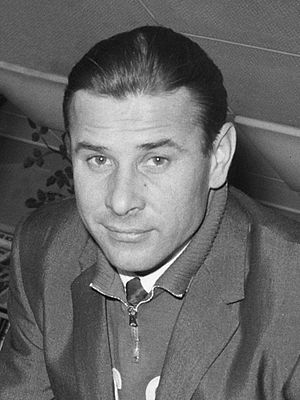 Lev Yashin, the first and only goalkeeper to win the Ballon d'Or. 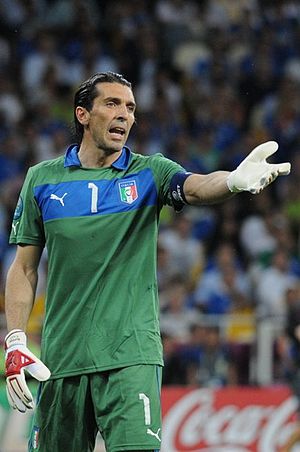 Gianluigi Buffon is the world's most expensive goalkeeper, moving from Parma to Juventus for £33 million, and is the only goalkeeper to have been named UEFA Club Footballer of the Year.

Goalkeepers are crucial in penalty shoot-outs. The record for most penalties saved in a shoot-out is held by Helmuth Duckadam of Steaua București. Duckadam defended four consecutive penalties in the 1986 European Cup Final against Barcelona.[9] Stefano Tacconi is the only goalkeeper to have won all official Club Competitions.[10]

José Luis Chilavert is the only goalkeeper to score a hat-trick (three goals in a game), doing so through penalty kicks. He also was a free kick expert. Rogério Ceni has scored the most goals for a goalkeeper, having scored his 100th goal in official games on 27 March 2011. Ceni scored his goals through free kicks and penalty kicks.[11]

At international level, Dino Zoff is the goalkeeper who has remained unbeaten for the longest period of time,[16] whilst Walter Zenga holds the record for the longest unbeaten run in a FIFA World Cup tournament, as he went unbeaten for 517 minutes in the 1990 edition of the tournament.[17] Gianluigi Buffon, Fabien Barthez and Iker Casillas hold the record for least goals conceded by a winning goalkeeper in a World Cup tournament, only conceding two goals and leading their team to victory, as they were also awarded the Yashin Award for best keeper. Gianluigi Buffon is also the only World Cup winning goalkeeper not to have conceded a goal in open play throughout the whole tournament (one goal coming from an own goal after a free-kick, and the second from a penalty). Fabien Barthez and Peter Shilton hold the record for most clean sheets in World Cup matches, with 10 clean sheets each.

Pascal Zuberbühler holds the record for least goals conceded by a goalkeeper in a World Cup tournament and holds the record for most successive matches at an international tournament without conceding (five games), he did not concede a goal in 463 minutes of World Cup games against hard shots from France, South Korea, and Togo as his team lost in the last 16 on penalties against Ukraine. Pascal Zuberbühler made Switzerland the only team in the history of the tournament not to concede a goal in normal time. Tim Howard holds the record for most saves made in a FIFA World Cup match, with 16 saves against Belgium in the Round of 16 of the 2014 FIFA World Cup. Oliver Kahn is the only goalkeeper to have won the Adidas Golden Ball for the best player of the tournament in a World Cup; Lev Yashin is the only goalkeeper to have won the Ballon d'Or. Gianluca Pagliuca of Italy became the first goalkeeper to be sent off in a World Cup Finals match, dismissed for handling outside his area against Norway in 1994. His team went on to win 1-0 and reached the final before losing to Brazil.

As of February 2016[update], the most expensive goalkeeper of all time was Gianluigi Buffon following his 2001 €40.29 million transfer to Juventus from Parma.[21]